The Moto Z2 Play comes in a fiery red box, a signature color for the Z2 series. The printed M logo is not static - depending on the market you may get a unique one. For example, if Lenovo is sponsoring your national football team - your local Moto Z2 Play boxes may come with a football-themed Moto logo.

The phone is bundled with a 15W Turbo Charger and a USB Type-C cable. Once again, depending on the market, you may get a pair of headphones or a Herringbone Nylon cover with fabric finish.

The Moto Z2 Play measures 156.2 x 76.2 mm and is just 6mm thin without any Mod or cover. The camera is quite prominent and it sticks out about 3mm. Once you snap a back cover, though, and the back gets all nice and flat.

The Z2 Play is not just thin, it's also very lightweight at 145g for an all-metal phone.

The Moto Z2 Play, cover- and mod-free, is almost identical to the Z2 Force. And that's a very good thing. For starters - the Z2 Play is made entirely of metal and its splash-resistant unibody has an impressively thin and sharp profile. Even with the bundled Nylon cover, the Z2 Play still looks like one of the thinnest smartphones around. And don't you worry - the audio jack didn't get the boot for this.

The only downside is that the Z2 Play is as big and heavy as the flagship Moto Z2 Force. 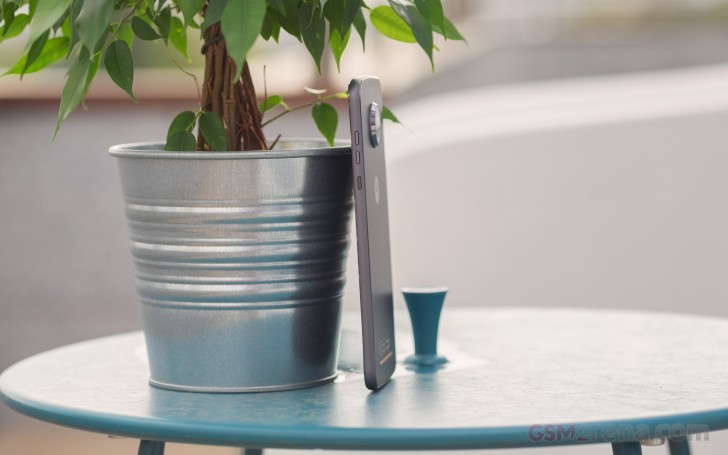 The Moto Z2 Play utilizes the same antenna solution as the one on the Force - running along the edges of the back in a strip that thickens at the top and bottom. This approach looks less disruptive on the overall design and may even be considered a decoration rather than necessity.

Talking about design disruptions, the antenna might not be such, but the magnetic patch that holds the Mods most surely is. While the Moto Z2 Play looks beautiful, the numerous contact pins contribute for a somewhat unfinished look. That's why our Moto Z2 Play came with a Nylon cover included, and we hope that's the case in other markets, too. 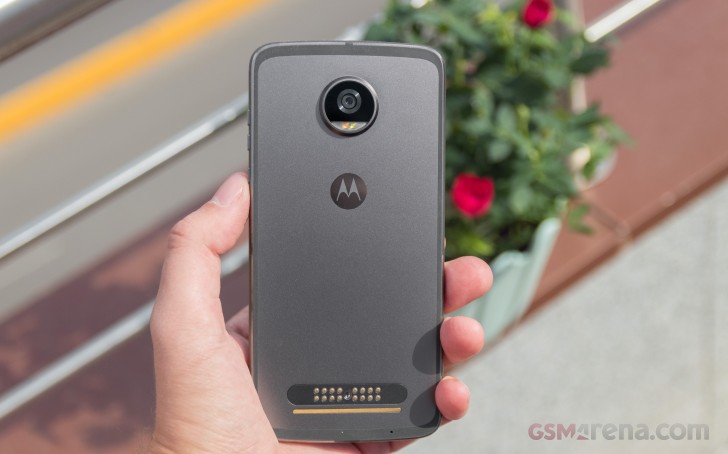 The other thing keeping the Mods in place is the 3mm thick camera bump. Even if Motorola doesn't need extra space for the camera, this circular plate helps in securing the Mods, so there is a practical reason for it besides the need to fit the camera hardware. 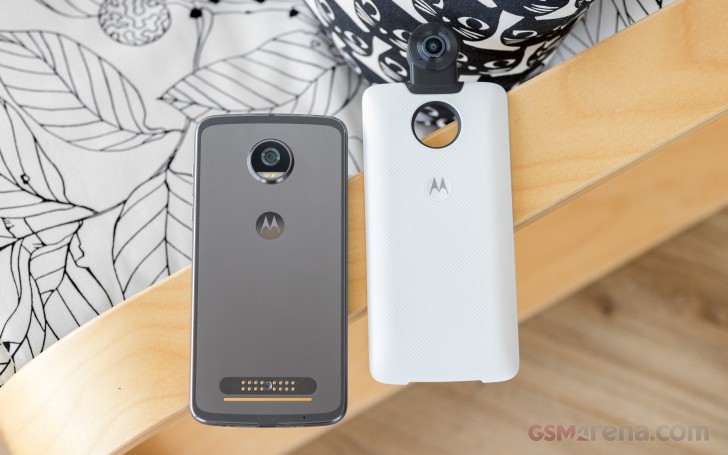 The front is occupied by the 5.5" Super AMOLED screen, shielded by a piece of Gorilla Glass 3. The bezels are substantial though, and while the black glass somewhat masks those, this won't be the case on the other color options. Motorola doesn't have any leeway in changing the design; it has promised that existing MotoMods will be compatible with three generations of phones, so it's normal to expect that all these will have exactly the same footprint. 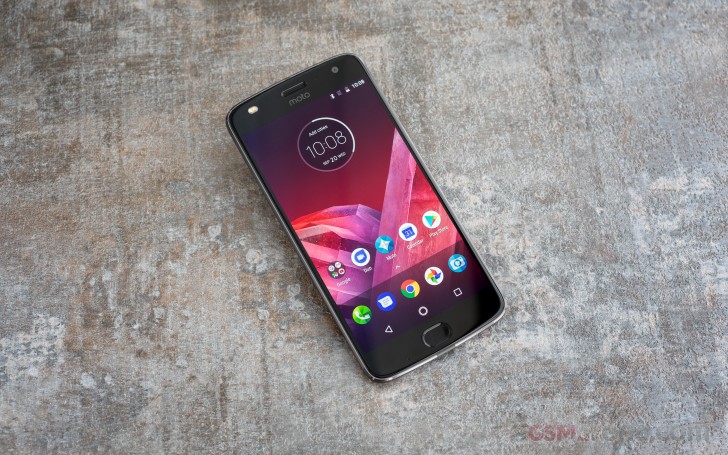 While the Moto Z2 Play feels pretty secure in hand, it also feels awkwardly wide, not to mention unnecessarily tall due to the massive chin. Then again, the slim profile and light weight are appreciated, especially when you slap on some Mods.

Finally, the overall build quality is flagship-grade and nothing short of impressive. The Z2 Play feels like a solid slab of metal in hand and the water-repellant nano-coating on the phone's internals should keep it safe in the case of a water accident.

Above the 5.5" AMOLED screen is the earpiece flanked by the 5MP selfie camera and its dual-tone LED flash. There are a couple of sensors almost invisible to the naked eye on the black model, too.

Under the display there is a large fingerprint sensor, which can be configured to act as one-button navigation. This way you can ditch the onscreen Android navigation bar and use only the fingerprint sensor. It's non-clickable though. Instead, it relies on swipes and short and longer taps.

Moto Z2 Play • Above the screen • the fingerprint sensor

The left side of the Z2 Play is completely bare.

The two standalone volume keys and the power/lock button are on the right. The volume controls are positioned pretty high and are unreachable during calls. Another issue arises once you adjust your grip - the three hardware keys are so similar that mis-hits happen all the time, even though the power key is textured to fight this in particular. We wish Motorola had revisited this positioning before giving the design a green light, but it wasn't meant to be.

The right side • the uncomfortable, unreachable, and often mistakable keys • The left side

The top of the Z2 Play has the noise-cancelling mic and a tray that can hold two nano SIMs and a microSD card. We apparently have the Dual SIM model here and it's nice to be able to use all the slots for a change.

The USB Type-C port and the analog audio jack are over at the bottom.

The notable features at the back are the prominent camera, which sticks out considerably, and a golden contact patch at the bottom. The mouthpiece is also at the back - easy to miss at the far bottom.

No audio with GPS