Motorola is back with its Z-series for one more year. Its design, in fact, is largely borrowed from the very first Moto Z that launched back in 2016. Rather than keep the Moto Z as the brand's flagship device, Motorola decided to launch the Z4 as a midranger while the Z3 was really a refresh of the Moto Z2.

Back with the Moto Z3, Motorola used a previous gen flagship chipset - the Snapdragon 835 from the Z2. With the Z4, Motorola didn't even go with a high-end chipset. It decided to go with a mid-range Snapdragon 675 processor instead, which points to a midrange positioning of the device. 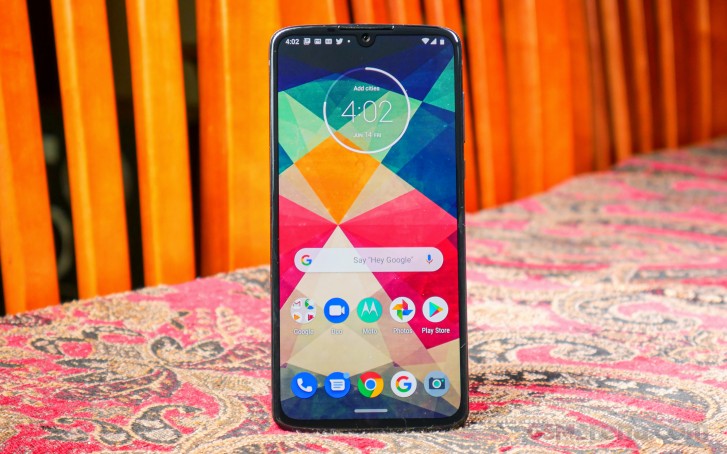 On paper, the Moto Z4 feels like it should just be the Moto Z4 Play, but as Motorola has done in prior years, Moto didn't release a "Play" variant of the Moto Z4, which is usually announced a few weeks before announcing the main Z-variant. Although the Moto Z4 sees some updates in the current trends of the smartphone industry like the in-display fingerprint scanner and a high-resolution 48MP camera, there's a significant change in the category of devices that Motorola aims to compete with.

The Z4's display is finally near-bezelless despite it having the same size footprint as the original. There's also a beefier 3,700 mAh battery here, which combined with the 6.39-inch OLED and power-efficient Snapdragon 675 should yield impressive battery life scores.

Motorola hasn't released a fully-spec'd out smartphone for a couple of years now and it appears this pattern will continue for a little longer. With rumors of a re-release of the foldable Moto RAZR phone, Motorola is slowly taking focus away from the Z series as the flagship it once was. Today, the Moto Z lineup is Motorola's only 5G-supported lineup and the 5G Mod only works for Verizon in the US.

Even so, with the Moto Z4, Motorola is keeping the modular Moto Mod platform alive. The Z4 is identical in its footprint to the first Moto Z Droid so that all Moto Mods made up to this point are still compatible with the Z4, albeit without the exact fitment.

Let's take a look at the Moto Z4's retail packaging.

We received a retail package that also included a Moto 360 camera Mod. This one doesn't have any Verizon branding at all, so we're not sure if the Verizon variant would also come with the free 360 Camera Mod.

This box is wrapped in a matte red finish and it's soft to the touch. Lifting the lid off reveals the Moto Z4 itself covered in a "Hello Moto" sleeve. below the cardboard tray where the phone goes is another red box that contains the device's documentation and Turbo Power Charger rated at 18W. There's also a SIM tool included in this red box. 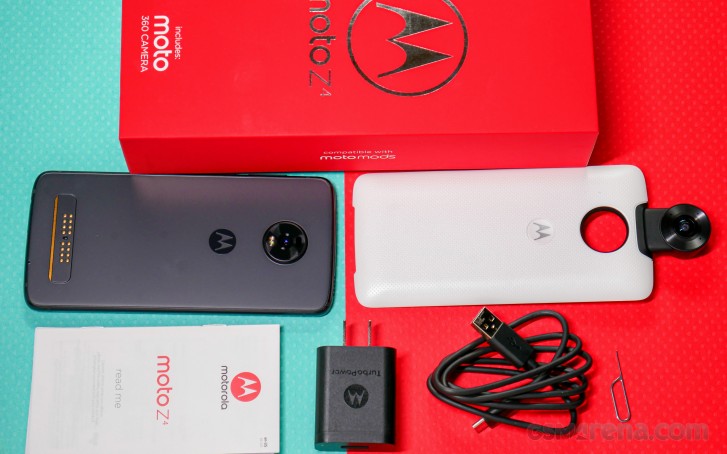 Below the red box is the 360 Camera Moto Mod wrapped in plastic. It appears to be the same hardware as the 360 Camera that launched when the Moto Z2 Force was announced a couple of years ago. These kinds of cameras were a huge trend around that time and to see it come with the Z4 just makes it seem like people forgot about it.

Anyway, that's all the Moto Z4 comes with. We do wish the package included a pair of earbuds or at least a microfiber cloth. Since the headphone jack is back, there's no longer a USB-C to 3.5mm adapter, and we don't mind that tradeoff.

On the next page, we'll talk about the Moto Z4's design.