Motorola is clearly no stranger to experimentation and soul-searching. We can't really blame the legendary brand for that, considering the financial turmoils, several buyouts, management and business changes in its relatively recent history. Naming, of course, is a traditional Lenovo area of experimentation. We can't really say we particularly appreciate the direction it is heading this time since today we are looking at the Motorola One. No Moto in sight. In the current lineup, it is positioned right underneath the Motorola One Power - a distinctly bigger device in almost every aspect, including a more modern chipset, bigger display and huge 5,000 mAh battery.

That being said, Lenovo hasn't given up on its historical three-tier device family lineup. Even though it might not seem so on the surface, there is the Motorola P30 - basically a more colorful and fun variant of the Motorola One Power (P30 Note), with a slashed battery capacity down to 3,000 mAh. Presumably, the P30 is skipping on an alternate name for certain markets to be more easily recognizable.

This should be all the explanation one needs to understand why the pretty singularly named Motorola One, we are looking at today is also named P30 Play in some markets and is the proverbial runt in the trio of P30 devices. Properly confused yet? Well, the gist of it is rather simple: Lenovo has a new trio of trendy, 2018-designed Motorola phones and the Motorola One (P30 Play) is cheapest of the bunch.

Motorola One in official photos

Just because something is cheap, doesn't mean it is necessarily bad or lacking in value, however. The exploding 2018 budget scene has proven such statements spectacularly wrong over and over again. That being said, don't dismiss the Motorola One light-heartedly. Many of the beloved Moto staples are still alive and well, like the insistence on a clean and snappy Android experience. We'll be sure to go through all the positives and negatives in detail on the following pages.

Starting with the retail package, as usual, it is a perfect illustration of why the Motorola One shouldn't be judged hastily. On the surface, it is really plain and simple- just a colorful two-piece box. Contents don't really excite at first glance either - a USB cable and a wall charger. 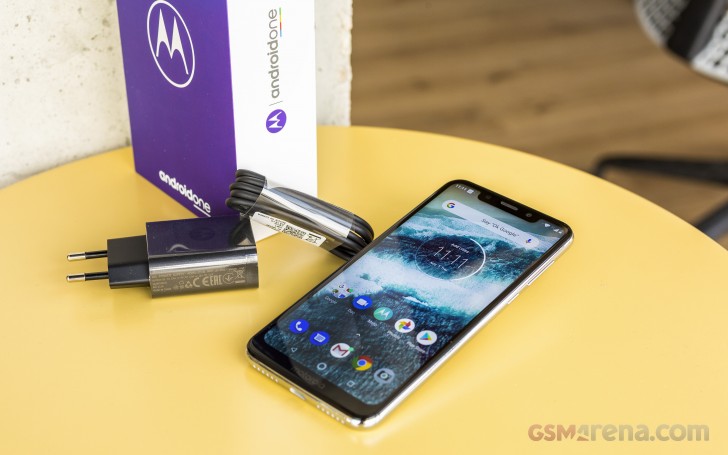 So, what's the big deal then? Well, for starters the cable in question has a Type-C connector on one end. And no, it's not a packaging error, the Motorola One has a Type-C connector as well. A USB 2.0 one, speed-wise, but still. The important bit is that both said charger and phone are rated for snappy charging at up to 15W. That definitely earns the Motorola One some bonus points.

Oh, and hidden within among the leaflets in the box, there is also a nice, thick, clear, soft plastic case for the Motorola One, so you can start using it right away. You're going to want to put it on immediately, as well. You'll see what we mean on the next page.

I also was with apple, and defected. Love my moto one. even in 2020 it still works great. I will definitely be getting another Motorola, have not missed apple in any way.

I have had only iPhones, chose to defect from them-. I could'nt be happier with the Moto one. It's fast, looks beautiful, does everything I need perfectly. Definitely will have another Motorola after this one, garaunteed.