Motorola has started rolling out Android 9 Pie to two more of its phones. The Moto Z3 is getting the typical Pie features and the January 1 security patch. You can read the full change log for more details. There's a detailed breakdown of the features here.

The most interesting addition is support for the 5G MotoMod, which will make this one of the very first 5G-connected phones (we’ve only seen hotspots and routers so far). It will work on Verizon’s network. The mod itself isn’t available yet and 5G networks are live in only a few cities.

The Moto G6+ also makes the jump to Pie, the update has already reached users in Brazil. Note that the security patch on this one is older, December 1. 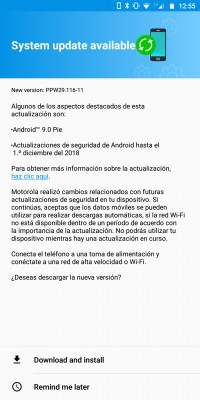 Thanks for the tip, Matt!

My question is when the Pie update coming to UK.

I have a Note9 thank you. I was just highlighting the fact that Lenovo did not fulfill its promise. Also why would I need to upgrade? Is the SD617 going to give me cancer? Or you perhaps think that saving money isn't worth the trouble of appreci...