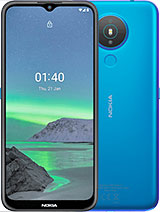 Minu, 12 Feb 2021Any entry level phone with 1gb ram must be cancelled for goodTrue

Nokia was in our heart and hit on popularity. But they are doing some boring design and features those are very allergic. Make different this otherwise shut down the brand. Don't frustrated us or your fans who love you blindly.

joe nodden, 06 Feb 2021(1) Because of company policies. Companies such as Xiaomi k... moreFind a way to help non-chinese company subsidize there products or you don't think Chinese do that...I told my friend in 2018 that the way Chinese are going some none Chinese will eventually be out of the industry....they are pricing to kill others...... but if the last westerners in industry refuse to go..... you'll see an increase in price of Chinese phones in few years time to...... Samsung is far bigger than even 6 Chinese company combined together it will be hard for the Chinese.... but as for hmd they just can't run out of busines there sales might go down but out of the industry completely is a NO..... someone needs to be there....if LG goes out am afraid Sony might fellow...

BlaBla, 06 Feb 2021It's not greed, it's just a completly different b... moreYou say "different league" as though western companies are better for advertising. For one you don't know if that's true. And secondly Chinese companies let their product sell itself. Like the original OnePlus One.

joe nodden, 06 Feb 2021(1) Because of company policies. Companies such as Xiaomi k... moreIt's not greed, it's just a completly different bussines aproach or should I say bussines model. LG, Sony, Nokia, Htc, Samsung, Google. They are all western companies, and except for Samsung they are really not good in sales. Actually they are terrible year after year. Why would LG consider pulling a plug from their mobile division? If cutting prices and profit margines is so easy why wouldn't they just offer lower prices to prevale their lost of mobile division? They all know they can't fight with chinese brands, as all ingrediants to make their phones are much cheaper than everyone else.
Chinese brands designs and manufactures everything at their own country. Logistic is much easier, faster, and cheaper. They don't have problems or extra money spending on human resources like all western companies as they are relying on online sales and not so much in phisical stores. They don't invest in commercials and marketing. Not in the same ammount like other western companies. They have different methodes for that. And most importantantly, chinese brands can have their profit margines waaay smaller than any western companies. 50% of profit margines are not greed, that's how most of succesful bussinesses works for decades. It's the way whole world is built. Only chinese brands can afford to low their profit margines to extreme but with a plan. Their plan is to oversature every market on this planet, because they are doing the same in China for some time. They are globaly doing great, but... Actually they are the ones who are greedy or should I say, they are becoming like all western companies. Because now, when they oversaturated the market, they can slowly but surely upping their profit margines and by that upping their prices for products. So you see.... They are starting to follow western bussiness model, because that is how all prolong bussiness can work out. They simply can't loose their money all the time. Even China with their gouverment could't afford losing money as bussiness is bussines. If it's not making money it's dead.
So that's why we should compare only chinese vs. chinese offers to fully understand what are we getting for the price, because western companies are in a different league.

That is why Nokia will never be Number One at any category of the smartphones.
Even, ancient Mediatek MT6735 %1000 faster than this waste of circuit.

BlaBla, 04 Feb 2021Didn't you noticed that only chinese brands can "... more(1) Because of company policies. Companies such as Xiaomi keep low profit margins.
(2) Because of labor laws in China, though hardly any company manufactures outside of China. I'm guessing it's the greedy higher ups in western companies that force the higher prices so they can line their own pockets.

This is hmd global not Nokia Finland

Hahahah, 04 Feb 2021Useless phone even for 50 dollars Make no confusion, this is not chinaware papperweight phone, you are in a wrong comment section. This one actually works.

I just don't get it. Why they cannot make smaller lowend phone with decent specs. I would say if phone makers will make nowdays something like 5" device with, 720p resolution , 4xx snapdragon, 4gb ram, 64gb rom, physical fingerprint reader, clean android (with at least 2year support), nfc, dual sim with 4000+ battery under 120-130 USD it will sell like hot pockets. Last phone like this was Redmi 4X. I'm just tired of 160-170mm long phones. We need some competition between iphones mini versions and android.

The design and colour is good.

Useless phone even for 50 dollars