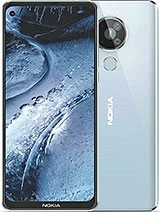 Ok, so the current rumoured specs for Nokia’s next FLAGSHIP device has a 120hz OLED. This phone is most likely going to be more expensive than the current 8.3, SO WHY IN THE WORLD WOULD IT HAVE A REAR FINGERPRINT?
The 8.3 has an in-screen fingerprint and that doesn’t even have 120hz. If I were to spend more money for a Nokia 9.x series phone, I would consider it a scam to have some average fingerprint reader on a phone that would almost cost as much as an S21.
I know that these are just Rumors but cmon people, if your going to render and guess specs of a phone, at least do it right.

joe nodden, 23 Jan 2021No wonder you use your trash a50 with that logic.i never included an A50 in my logic

joe nodden, 01 Dec 2020Hahahahahahaha looks like this trash most likely won't... moreoh please, u can still use anything from 2012 and it would still work to this day

DudeFixIt641, 03 Jan 2021The next snapdragon is not for another 5 years. Qualcomm up... moreThe hell are you on about.

joe nodden, 01 Dec 2020Hahahahahahaha looks like this trash most likely won't... moreThe next snapdragon is not for another 5 years. Qualcomm updates are every 5 years, noob.

Good phone I was waiting for from Nokia,bt why not adding a flash light from the front camera

joe nodden, 01 Dec 2020Hahahahahahaha looks like this trash most likely won't... moreThese are the confirmed. Samsung is not in the list, maybe theit own chips will be in their S21

The next snapdragon isn't for another 4 years. 865 just came out this year and it takes 3-5 years for each one

Hahahahahahaha looks like this trash most likely won't have the Snapdragon 888. To quote XDA,

Nokia isn't on that list. So they either aren't launching this anytime soon, or it's gonna have the 865.

Anonymous, 11 Nov 2020Must add cancelled options as card slot , jack and radio3.5mm jack i can understand, but radio and card slot, nah man get with the present age and use the cloud and just download an app with radio built into the app bruh

It's almost December and Nokia is still dead silent about this device. Something tells me it will not actually be released in 2020.

MATE 30 PRO, 17 Nov 2020Unreal phone.Unreal as in good? Or unreal as in unbelievably bad? Because this thing is gonna start shipping when the 875 has already been released, and right now it's rumored to have an 865.

NeonHD, 17 Nov 2020Seems that a lot of people here desire more from the design... moreCouldn't agree more.
Of course having OEM's creating their own versions of Android has made stock Android what it is today. We have to be honest about that. Google has been introducing solutions into its stock version that other OEM's already had a long time in their launchers so it's not all bad.
I wonder how far Apple would now have been with their OS should they have allowed other OEM's to build their versions of it.