The Nokia 9 continues to clear wireless authorities – from 3C to the FCC. The FCC was even kind enough to post screenshots of the About screen along with a fairly detailed list of specs (buried into the RF report). 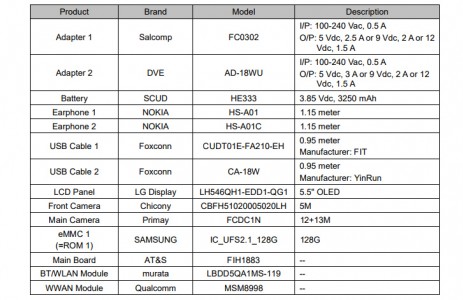 A handy table with Nokia 9's key specs (thanks, FCC)

The phone will sport a 5.5" OLED panel from LG (resolution and aspect ratio unknown), HMD's first OLED screen. The chipset is this year's Snapdragon 835 and it will be running Android 8.0 Oreo. RAM is not mentioned, but the storage is a generous 128GB (UFS 2.1 sourced from Samsung).

The final details divulged by the FCC are a 3,250mAh battery with fast charging (18W) plus some in-box items - a charger, USB cable and headphones (seemingly each sourced from one of two suppliers).

Nokia 9 About screen (from FCC)

While the Nokia 9 missed the deadline for holiday shopping, there seem to be no hurdles for an early 2018 launch. Some rumors suggest this could be as early as January 19 at an event that will also bring a sequel to HMD’s first Nokia – the Nokia 6.

I think you are a truly a Nokia hater. But Iam the real guy who knows about Nokia. Should I show it to you??? 1. Lumia phones are the worst phones ever because the build quality is feels plastic too cheap and the Windows OS have no apps at al...

I felt that Nokia will receive more clients from Apple for camera department. Because at that time of Nokia's death, Nokia sold it's iconic sensor(Not Zeiss) to Apple for their iPhone 6, not Microsoft. The Zeiss optic and the pure view was only to M...