HMD Global unveiled the Nokia C20 in April, and today it announced it will introduce the C20 Plus on June 11.

The company also shared a poster on Weibo revealing the C20 Plus' design - the phone has a textured back housing two cameras inside a circular island. There's no fingerprint reader here, and the phone likely won't have one under the screen either, so you'll have to rely on password/pattern/PIN to unlock the C20 Plus.

Upon closer inspection, you can see the top side of the C20 Plus has a 3.5mm headphone jack, with the left-side frame home to the SIM card slot. The power key and volume rocker will be on the opposite side. 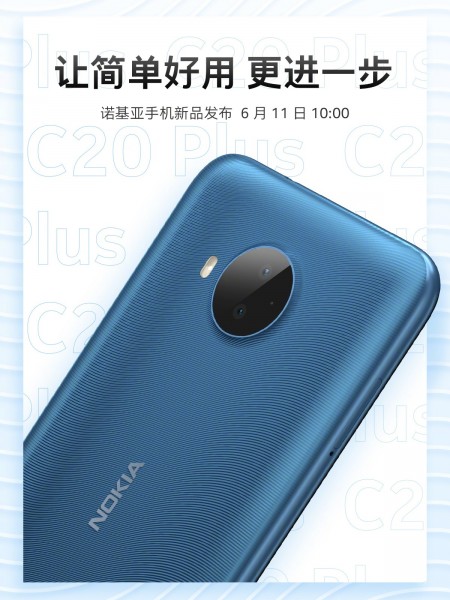 The poster doesn't show us the Nokia C20 Plus' front, but you can expect a waterdrop notch display like the non-Plus variant, which could have a bigger diagonal. The smartphone's also rumored to ship with a 5,000 mAh battery, which is 2,000 mAh larger than the C20's cell.

HMD hasn't divulged any specs of the C20 Plus yet, but thanks to Geekbench, we know it will have a Unisoc SC9863A chip at the helm with 3GB RAM. Although there might be other RAM options as well.

The benchmark database also revealed the smartphone will run Android 11, which will likely be Go Edition since the C20 also boots the same OS.

With the official unveiling over a week away, you can expect HMD to reveal more about the C20 Plus to build some hype around it.

Nokia C20 Plus appears on Geekbench with the same chipset, more RAM

this one is not good at all

Because there's a big market for junk.