And of course, the point of hubs is that they are the go-to place to do things, instead of apps. Apps can integrate into the Photos hub, so for example, a photo effects app can make its options available right in the hub. However, devs need to enable that into apps.

Albums feature the camera roll, the preloaded system pictures and all of your Facebook albums. A flick to the left shows all your pictures sorted by date. You cannot sort individual camera roll photos into albums, though.

The camera roll displays your entire collection of photos and videos captured with the device in a 4x5 grid. You cannot change the layout. A photo can be viewed in either portrait or landscape mode. Zooming in on a photo is done by either double tap or a pinch. We like it that the camera roll doesn't downsize pictures and you can enjoy them in full resolution.

Interestingly, the Lumia 520 doesn't feature the Nokia Music service out of the box, but comes with the default Windows Phone 8 Music + Video app. You can download it from the Marketplace though, to get free music streaming (no set-up needed) and has an extensive library of tracks. While it is mostly streaming oriented, you can make tracks available offline in Music (they remain on the device only temporarily though).

But Music competes with services like Pandora too - you can give it a list of artists you like and it will automatically build a playlist to your taste. Nokia takes pride in real people creating the mixes (including celebrity-made mixes) instead of computer algorithms and exclusive Lumia Live Sessions too. There are plenty of charts (e.g. Top sellers, Best of 2012, Songs for Fall) if you're looking for something new too.

The central component of Nokia Music is Mix radio - it plays a mix of songs rather than manually selected tracks. You can also play your own music with this app and purchase albums and individual songs to add to your collection.

Sadly, the default Music app on the Lumia 520 is pretty limited and there isn't neither an equalizer, nor support for Dolby Digital Stereo. You can set however a Play mix that generates a mix out of your songs.

Update: Since the GDR2 update, the Lumia 520 now has FM Radio support, as well.

As a music player, it's pretty standard - your tracks are sorted by artist, album, playlists or you can view all songs. The interface is very similar to that of the stock music player, but under the album art it lists the next three songs to be played - really helpful if you're using shuffle. There's no way to manually reorder the upcoming songs, but you can shuffle them if there's one you don't like.

The video player in Windows Phone 8 has greatly improved codec support since our last encounter. Now it supports XviD (though we had some issues with this codec), DivX and MP4 videos up to 1080p resolution. The few things it won't play are MKV files and videos using the AC3 audio codec. There is no subtitle support at this point either.

The Nokia Lumia 520 audio output is virtually identical to that the Lumia 720. This is to say not the best around, but certainly among the better in this price range.

When connected to an active external amplifier, the Lumia 520 mostly managed good scores with the higher than average intermodulation distortion the only exception. Volume levels are pretty high, and surprisingly higher than those of the Lumia 720.

The degradation when you plug in a pair of headphones isn't too bad. consisting in a moderate increase in stereo crosstalk stereo crosstalk and slight deviations of the frequency response. That's good enough for most, but the extremely demanding audiophiles will certainly find better options out there. 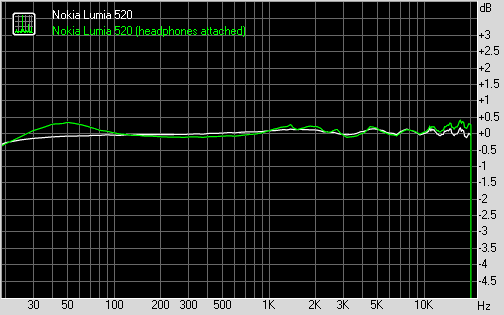 I am looking for the charging port for my Nokia Lumia 520 and the screen,

Please help me what I must do,my phone windows phone 520,it always on the flight mode, when I try to changing it ,it refusing what I must do?

first, press and hold the volume up button then press the start button, simple.