For the longest time the Nokia Lumia 520 was the most popular Windows Phone handset out there, so it’s very strange to see it running Android. And not just any Android either, the latest 7.1 Nougat!

XDA dev thinhx2 got CyanogenMod 14.1 to boot on the veteran smartphone and while it works, it’s unstable and far from ready to be a daily driver. Still, it’s massively impressive that it works at all - this is a phone with a dual-core 1GHz processor and 512MB of RAM. And it does split-screen multitasking as well!

The same dev got the Lumia 525 on Nougat too (it’s mostly the same phone, but with double the RAM). 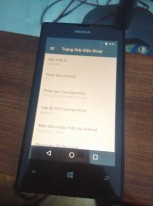 Lo and behold: an Android-running Lumia 520

Are you thinking what we’re thinking - why hasn’t someone done the same to a flagship Lumia, say the 950 (XL)?

Google said to be "closely" involved with new Nokia phones

You think windows phone are super smartphones!!! Windows phone is so much buggy that even microsoft has closed all their forums. Moreover very less apps are available on windows store as compared to play store and most of the app developer don't rel...

ya, lumia is still old, outdated one