The retail package of the Nokia Lumia 625 is a pretty standard deal. Inside the moderately-sized box you'll find a USB cable, an A/C adapter for your particular region, and a headset. The charger has its own cord rather than relying on the provided USB cable like in most other retail packages.

As an added bonus, Nokia has thrown in an extra back cover - orange in our case, to complement the yellow one that the Lumia 625 came in.

The Nokia Lumia 625 retail package includes an additional back panel

At 133.3 x 72.3 x 9.2mm and 159g, the Lumia 625 comes in larger and heavier than its younger 620 sibling, due to its larger display. One notable improvement is that Nokia was able to trim the phone's profile by almost 2mm, leading to a much more elegant and less bulky feel.

The removable back panel's only benefit is customization - the 2000 mAh battery is non-user-replaceable.The matte finish provides a surface that is very resistant to fingerprints, but still has enough texture so as to provide grip and not feel poorly made.

The replaceable back panel has the added benefit of covering not only the rear of the device, but also the sides, and is even visible from the front as a slim frame around the screen. This means that the back panel on the Lumia 625 does more than just cover the battery and internal slots - it defines it.

We've already mentioned that the matte finish on the well-fitted plastic rear panel is almost impervious to fingerprints, but it also lends to a feeling of quality. The hardware buttons also come as part of the panel, so you don't have to worry about them being a different color when you want to change things up.

Besides our yellow and orange, the Lumia 625 also has bright green, black, and white panels to choose from.

The changeable rear panels bring character to your device

Beyond that, the design strategy of the 625 is largely the same as what you'll find on most other Lumias: rectangular frame with tapered edges, for a subtly curved back. The display on the front also features gently tapered edges, which lend to the overall design aesthetic.

The design scheme is true to Nokia

The Lumia 625 is heavier than its predecessor by just over 30g, but by no means overly so. The added weight can not only be attributed to the larger display, but also to the hefty increase in battery capacity to 2000 mAh.

While you'll find AMOLED displays on high-end Nokia phones - the 925, 928, and 1020 to name a few - or LCD ClearBlack displays further down the ranks, the Lumia 625 has to make do with a garden variety LCD. It's an IPS unit nonetheless, and even one that's covered with Gorilla Glass 2.

The display in question measures 4.7" and is of WVGA resolution (480 x 800) - the same as the 3.8-inch Lumia 625 - which results in a pixel density of just under 200ppi. While 200ppi is considered right around average by today's standards, they do tend to get stretched a little thin on such a large display. Here's how the pixels on the Lumia 625 stack up to the Lumia 620 under our microscope: 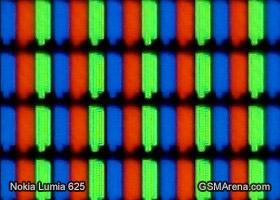 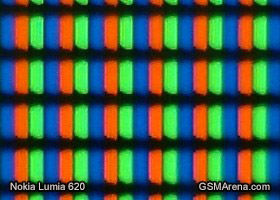 The Nokia Lumia 625 has a setting that allows the user to choose one of eleven saturation levels, should the display appear too punchy for your liking.

The color temperature option is great too - it has 11 settings and goes from cool through neutral to warm. On LCD phones you're usually stuck with either a cool screen or a warm screen, depending on your preference it's either good or bad, it's a matter of luck hitting the right one. Having control over that takes chance out of the equation.

In terms of contrast, the contrast ratio provided by the Lumia is right around the middle of the road. We are content with the side viewing angles, but these are just average as well.


As for the sunlight legibility leaves much to be desired.

The screen on the Nokia Lumia 625 uses the Super sensitive touch technology that debuted on the 920. It can respond to fingernails or car keys, and will detect touches even if you're wearing gloves.