Nokia is pushing their own music service called Mix Radioahead on the default Music + Video app. It offers free music streaming (it works out of the box) and has an extensive library of tracks. While it is mostly streaming oriented, you can make tracks available offline in Mix Radio (they remain on the device only temporarily though).

Update: Since the GDR2 update, the Lumia 820 now has FM Radio support, as well.

Audio quality has its ups and downs

The Nokia Lumia 820 turned out to be the best of the three WP8 smartphones we have tested in the first part of our audio quality test. When connected to an active external amplifier, the Lumia 820 got great scores all over the field and had average volume levels.

Sadly, there's quite a lot of degradation when you plug in a pair of headphones. The intermodulation distortion increases significantly and the stereo crosstalk spikes, too. In this scenario the Nokia Lumia 820 is actually some way off its WP8 competitors. 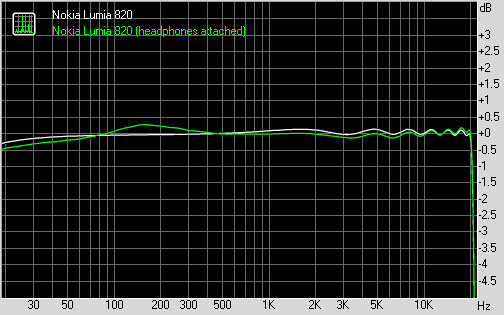