Nubia has just announced the Red Magic - a dedicated smartphone for gaming. Just like Xiaomi's Black Shark, the Red Magic has been designed with gaming in mind - its edgy shape is inspired by a battleship, while some configurable LED strips impress from the back. There are also three vents for some sort of air cooling and graphite layers for quick and even heat dispersion. 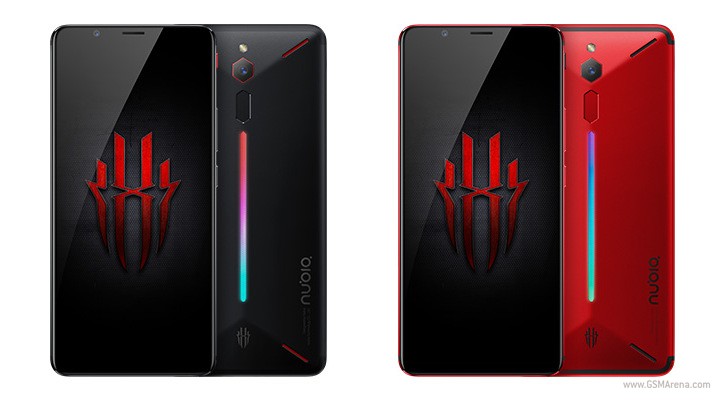 While the design and flashy strips are probably the phone's highlights, the chipset to power those games is also of utmost importance. In the case of the Nubia Red Magic that is the Snapdragon 835 SoC with either 6GB or 8GB of RAM, depending on the storage option you choose - 64GB or 128GB. Now that is not the most current Snapdragon, and obviously behind the 845 chip inside the Black Shark, but for a 1080p screen it should be quite future-proof.

There is a special hardware key for performance mode at one of the phone's sides.

The Red Magic impresses with a 24MP main camera with f/1.7 bright lens. There is also an 8MP front snapper with f/2.0 wide-angle lens.

Nubia Red Magic comes with a large 3,800 mAh battery capable of fast charging. Other notable specs include a rear-mounted fingerprint scanner, and, unfortunately, a single loudspeaker. There is also support for DTS sound.

The Red Magic runs on a new Red Magic launcher based on Android 8.1 Oreo.

Edges Inspired by a battleship who thinks this nonsense up?

Oh and one more thing Madfinger games is a developer from Czech Republic not American... And I too had a Nexus 7 2012 so I know how well optimised their games were for Nvidia chips back then cos of their tie up. Besides until Unkilled all their gam...