The Reno Ace is one good looking phone, that's for sure. Our review unit is the Interstellar blue colorway and it's a rich dark blue-green that goes darker towards the top. It changes hues continuously when you tilt the phone and shine light at it. It's as tough to capture in a photo, as it is captivating to look at. 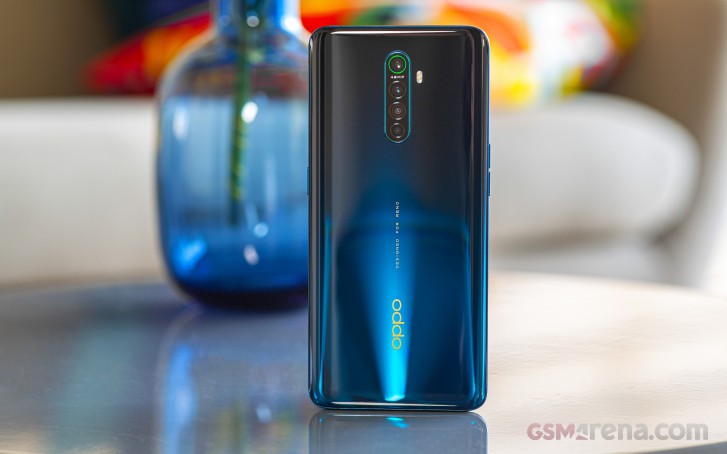 There are two more color options, one standard, one limited edition. The standard one is dubbed Electroacoustic violet and is similar to what every Chinese maker has come up with in the past couple of years since Huawei started experimenting with gradients. The Gundam edition is mostly light gray with blue and red accents. Out of the regular colors, we'd pick the Interstellar one in a heartbeat, though we'd understand if you prefer the Gundam edition. 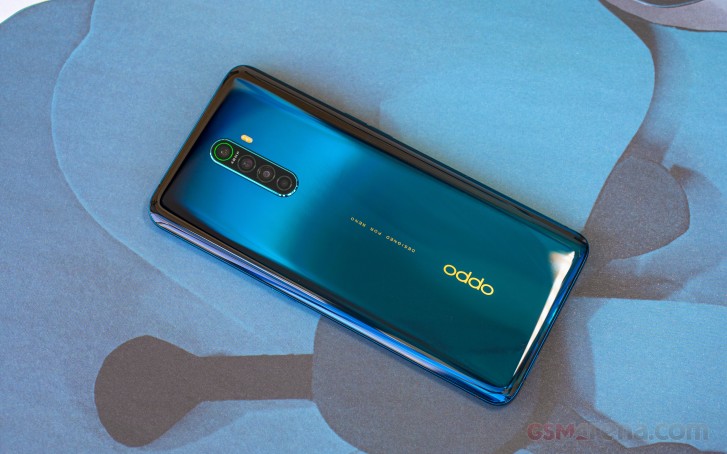 The back is reasonably clean - we'd say a simple Oppo logo would have been enough, but the 'Designed for Reno' inscription isn't too obtrusive, so we'd give it a pass.

The quad-cam assembly is placed in a joint bump that sticks out by a millimeter tops and has a polished metal surround. The main module is on top, accented by a green ring and a simple 48MP label. The dual LED flash didn't make it inside the cluster, so it's to the right, flush with the Gorilla Glass 5 sheet of the back panel. 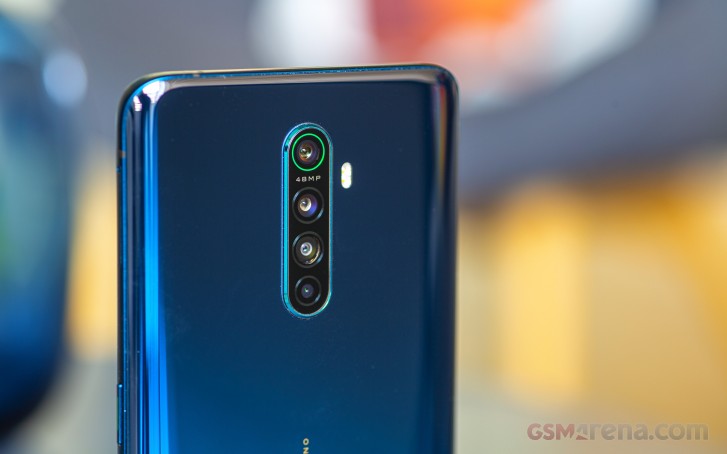 The display side is protected by Gorilla Glass 6, Corning's latest. You wouldn't want to crack that glass and have the beautiful 90Hz 6.5-inch AMOLED ruined by a spider web, would you. 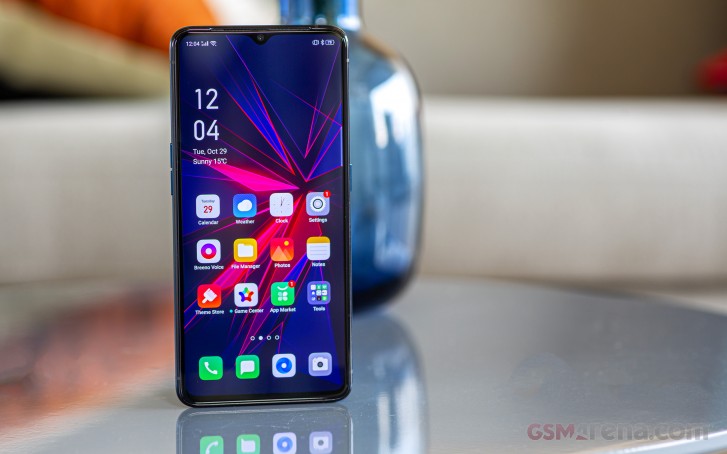 It's not a bezelless display, strictly speaking, but we do appreciate the fact that the frame is as thick on top as it is on the sides. There's a notch too to house the selfie cam - the Reno Ace doesn't employ an elevating module.

Above the display you'll find a long mesh behind a portion of which there's the earpiece that also doubles as a second speaker.

Midway betwen the selfie cam and the right corner, there's a barely visible window for the ambient light and proximity sensors. 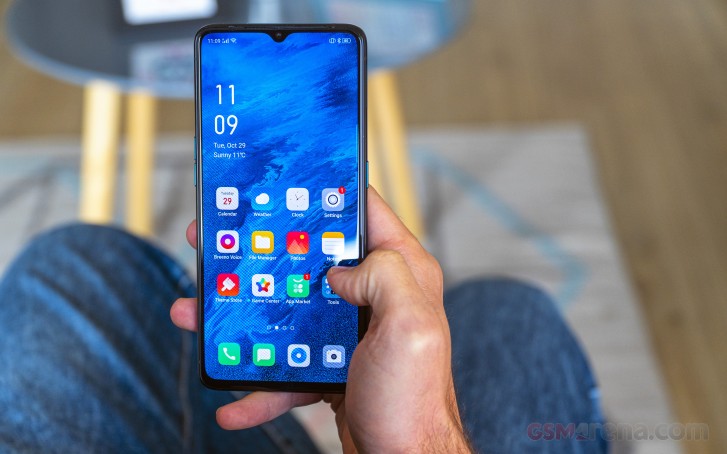 Continuing the tour, let's see what you can find along the satin-finished aluminum frame. A lone power button is on the right, larger than most, with a green accent inside it - same green as the ring around the primary camera. High above it is the card slot which will take one or two nano SIMs but no microSD card. 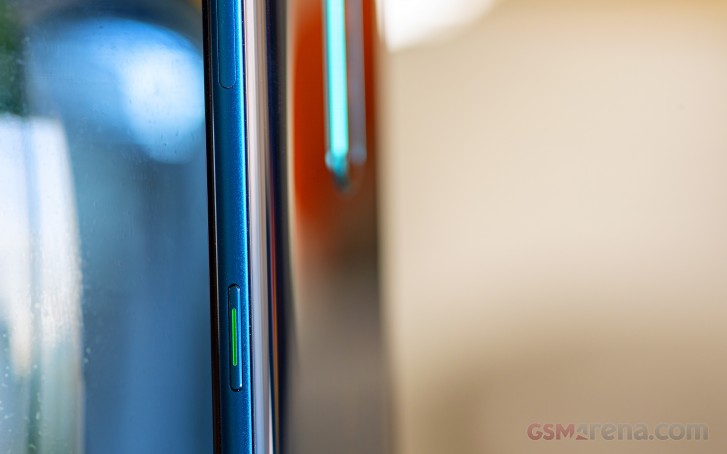 Down on the bottom of the phone, the USB-C port is in the middle, the main loudspeaker to one side, the primary mic and the 3.5mm jack to the other. Another mic is placed on the top of the phone, for noise canceling and stereo audio recording purposes.

The Reno Ace measures 161x75.7x8.7mm and weighs in at a nice and round 200g. It's quite a dense package, particularly compared to the Reno 2 we have on had, which has mostly the same footprint, but is 11g lighter. The Ace is a gram heavier than the Realme X2 Pro, though we won't be surprised if that's due to creative rounding up from the two marketing departments. The OnePlus 7T is, in fact, lighter at 189g, but it does have a smaller 3,800mAh battery, so it checks out.

The Reno Ace has a quietly premium feel, thanks to the all the heft, the soft touch of the frame and the reassuring click of the buttons. It'll attract fingerprints as much as the next glass-backed phone, and it'll be as slippery as any of its similarly built rivals. The frosted OnePlus 7T will be even more difficult to hold securely, but maybe none of this matters if you keep your phone in a case. 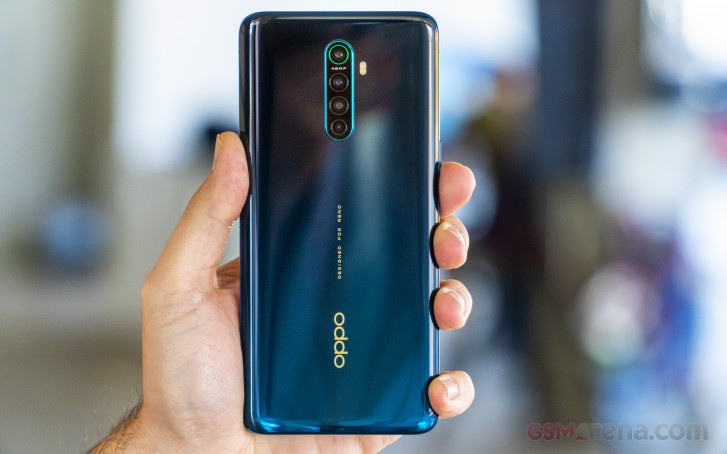 It will not launch in India

Hey guys.This phone comes with ads like the xiaomi phones or not?

what is the launched of oppo reno ace launch in India? please