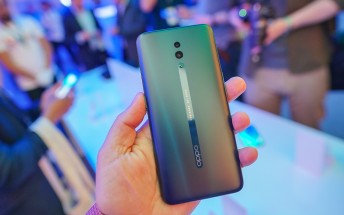 The Oppo Reno was introduced alongside the headline-grabbing Reno 10x zoom. While it lacks the latter's namesake rear camera, the 'vanilla' Reno does sport the same intriguing triangular pop-up bit that houses the selfie camera on one side, and the LED flash for the rear snappers on the other.

This is the latest device to be put through the now very well known torture testing on the JerryRigEverything YouTube channel. As always, this should give you a feeling of how durable this phone can be expected to be.

The scratch test reveals nothing out of the ordinary, Gorilla Glass is Gorilla Glass and will scratch at similar levels on the Mohs hardness scale regardless of which phone it's used on. The (almost certainly pointless) flame test turns the AMOLED pixels white after around thirty seconds, and they never quite recover.

Finally, the all-important bend test. Past Oppo devices haven't fared well in this one, but while the Reno's glass back separates from the frame somewhat because of weak adhesive, there's no catastrophic damage this time around.

Thank you for having common sense sir. Of course I cannot speak about weather the guy is a good person or not, but with all the resources and all the popularity he has, he has the responsibility to do something good with it, not just him all those in...

The very first statement I said is "I cannot watch the guy", which in case you have any doubts means I already don't watch him. Of course I had to watch a few of his videos to know they are not worth watching. You call me a spoiled child when you are...