Oreo for Motorola Moto Z Play begins rolling out in US

The Motorola Moto Z Play has started receiving a new update in the US. Arriving as version OPN27.76-12-22, it's a major update that brings along Android Oreo OS.

As you can see in the screenshot below, in addition to the usual Oreo goodies, the update also includes Android security fixes for the month of April. 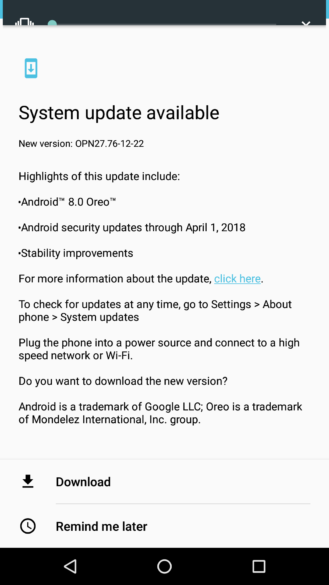 The Moto Z Play Oreo update started rolling out last month, with India becoming the first market to get it. It took over a month, but it's good the update has finally arrived in the US. The Moto Z also started receiving Oreo a few days ago.

Motorola Moto G6 to be available in US starting today

The innovation the reason, samsung an LG old tech, just new camera and SoC every years, thats it

I got updated my phone last month an now it's running on Oreo many things got changed hope everyone get the update soon.

Google launcher now says device not compatible!! I don't like other 3rd party launchers not the Moto default one. Hopefully a fix will arrive shortly.