Rumors surrounding the successor of Pocophone F1 are pretty vague so far and we've only heard about it last month from Xiaomi's global head Alvin Tse who teased that the phone will come out in 2020. But now we have a solid proof that we can expect a successor thanks to the leaked trademark application. 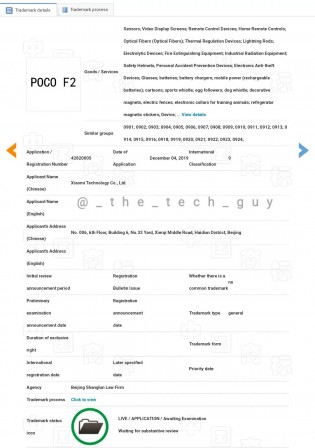 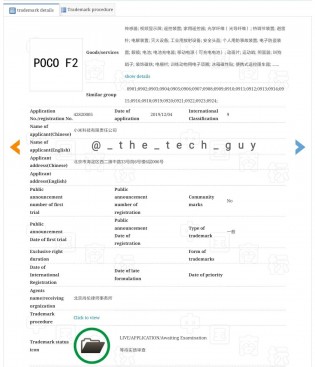 Documents for the trademark

According to the documents, Xiaomi has filed a trademark for a phone named POCO F2 - a clear indication that the successor is coming. And a trademark was presented right before the launch of the original POCO, so the announcement is probably nearing.

Of course, the global name of the phone will probably be Pocophone F2 except for India, where it's going to be called POCO F2, judging by the previous release. It looks like the Redmi K20 Pro isn't the spiritual successor of the Pocophone F1 as the latter would be getting a proper heritor.

SD 865 is better in terms of cpu power then A13 and is definately way better then A12 and GPU is only marginally inferior to A13 and better then A12. Get your facts straight.

Well man i am not telling you it was y personal advice whether you take it or no its your choice. I am not forcing anyone to buy anything its not my style. Like apple not forcing its customers to buy a 900 eur devices with LCD screens and a 5V ...

Don't tell us your opinion about everything, cause we don't care. I will get what I want. Don't tell me what is good. Nice day!