Huawei's upcoming Mate 10 smartphone has leaked yet again. This time, however, the leak comes in the form a promotion poster that has been spotted in a Chinese store, revealing some of the key specifications for the device. 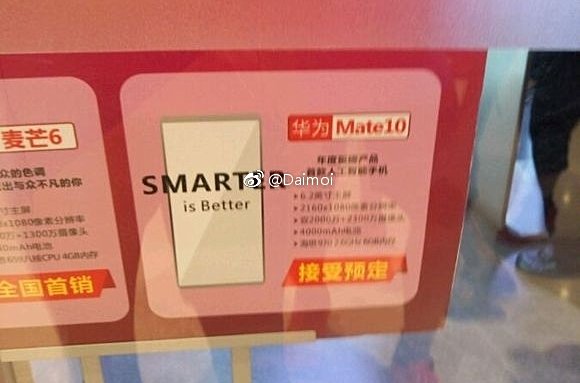 As you can see, the image isn't exactly clear, but does give away the following information: 6.2-inch display, 2160 x 1080 pixel screen resolution, 20MP+23MP dual rear camera setup, and 4,000mAh battery (something which the company recently teased).

The Chinese company has already confirmed that the Mate 10 will be powered by the Kirin 970 SoC. The Mate 10 series consists of three or four variants, and all of them will be made official on October 16.

I am loving the camera resolution increase.. 12MP resolution is too low.. 20+MP is the only way to go..LUMIA 950's 20MP are extinct.. Sony's 20MP are plagued by software quality.. This Huawei Mate's 20MP might finally beat my still standing Nokia 808...

This is how you do the battery capacity. I'm intrigue whether this will be an OLED or LCD display as both are highly possible.