A couple of days ago, we heard about a new addition to the Realme C line – the C12. The RMX2189, as its official name goes, has already been through major certification authorities in Thailand, Indonesia, Malaysia, and China. In a new development, the unannounced handset was also spotted on GeekBench. That listing includes info on a MediaTek Helio P35 chipset, along with 3GB of RAM and an Android 10 OS. 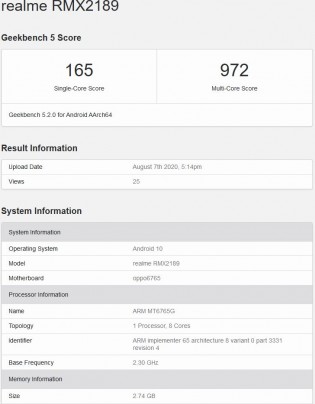 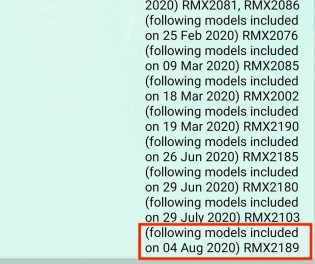 The EMX2189 identifier is also mentioned on the BIS (Bureau of Indian Standards) website, which means that we can add India to the aforementioned list of countries, definitely getting the Realme C12. Other leaked detailed about new model, expected to slot right between the existing Realme C11 and C15, include 4G-only connectivity, an HD+, waterdrop-notch display, just like on its bigger sibling and a 3.5mm jack. The C11 is expected to pack a massive 6,000 mAh battery, only charging at a basic 10W (5V@2A).

Phones of this caliber rarely get a lot of fanfare surrounding their release, so we expect the Realme C12 to simply drop onto store shelves shortly. Still, it’s worth keeping an eye on, since, if done right, it could easily be a popular seller in the upcoming months.

Realme C12 with a 6,000 mAh battery gets multiple certifications

Realme X3 Pro pops up on Geekbench with Snapdragon 855+

Are you kidding me realme ?