Long as we may have been in the business of smartphones, every now and then, a company manages to genuinely surprise us with its naming practices. When the words Pro and Max have been almost stripped of meaning and Plus primarily denotes a size difference, Realme's GT lineup ventures into more abstract terms - today, we have the Realme GT Master for you.

Not to be confused with the more upmarket GT Explorer Master, the GT Master is a mid-tier offering that is going to be the most affordable global GT, if we assume the GT Neo will remain confined to China only. Realme insists on calling it Master Edition, but that implies exclusivity, and we're not buying it.

The official €350 price tag still allows for quite a lot of goodies to make it to the Master's spec sheet, including a 120Hz Super AMOLED display, a 5G-capable Snapdragon 778G chipset, and Realme's signature 65W SuperDart fast charging. On the surface, the Master also boasts the faux leather Suitcase design that's featured in the more premium Explorer Master - as long as you get the Voyager Gray colorway.

In terms of specs, a fairly run-of-the-mill camera system is headlined by a 64MP primary module on the back, joined by an 8MP ultrawide and a 2MP macro - sort of like the GT 5G setup, only with a smaller sensor on the main unit. The GT Explorer Master is the camera-centric of the GT bunch, with a notably superior rear configuration, but it does share the 32MP selfie camera with the non-Explorer we have here, a step up from the GT 5G front-facing camera.

Perhaps the most notable blemish in the GT Master's specsheet is in the speaker field - all the other GTs have stereo speakers, this one has a single bottom-firing one. The plastic frame is hardly grounds for criticism, even less so in light of the more expensive GT 5G's similarly plastic build.

There's hardly anything to complain about when it comes to the presentation and the box contents. The GT Master arrives in an oversized black box with a liberal application of contrasting bold texts reiterating the phone's name and listing key specs on the back. 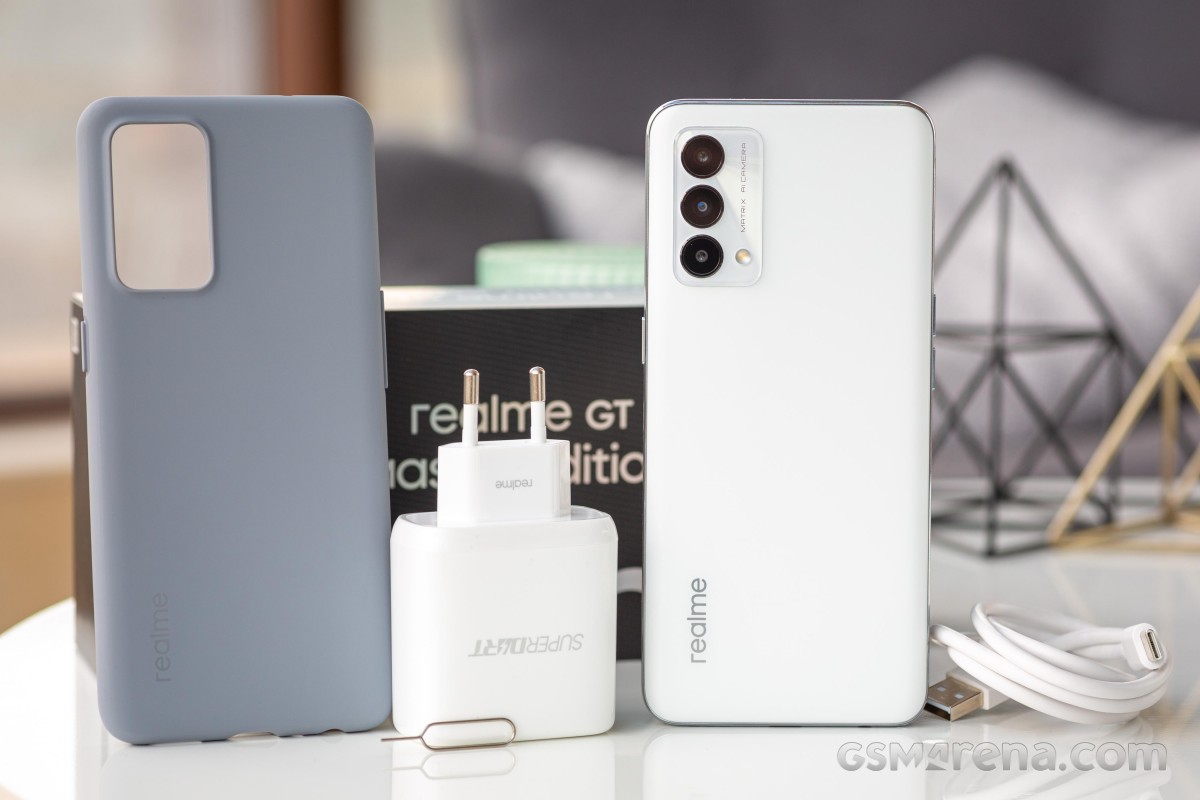 Inside, you'll be greeted by a thin cardboard sleeve covering the tray that holds the phone. Underneath all that, there's a simple but nice to the touch soft silicone protective case - all GT Masters get it in gray, regardless of the specific phone's color scheme, though the Voyager Gray does get one to mimic the strips on the phone's back. Below the case is the chunky 65-watt charger, and there's also a USB-A-to-C cable to complete the SuperDart link.

Well, you dont mind for battery, you like ultra fast charging and good performance in multitask, browsing, several games, realme GT Master is good choice. But you should aware by reading some comments that said slow speed WiFi. I think my uni...