The Realme X is equipped with a 6.53-inch OLED display - the first of its kind for the value-oriented brand. It's got a FullHD+ resolution in a 19.5:9 aspect or, more specifically, 1080x2340px, which makes for a 394ppi density. Best bit about the panel is that it's got no notch - the selfie camera isn't in the way. 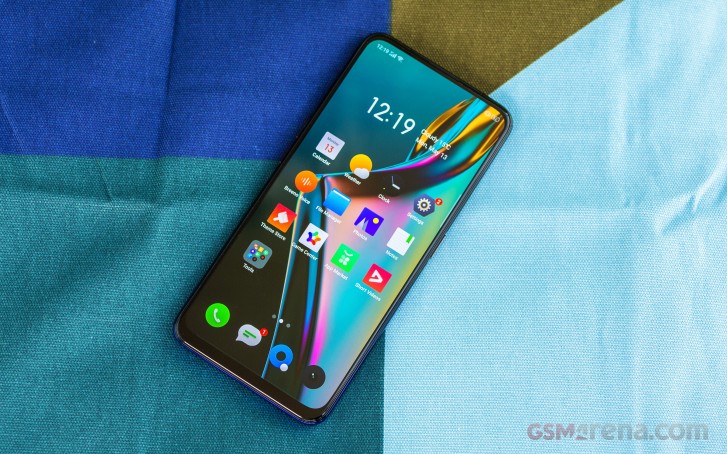 The maximum brightness we measured was 448nits - almost precisely the 450nits Realme promises, and a fairly typical OLED result. There's no boost in Auto mode, however, so that's all the brightness you'd be getting in any light. It's enough, though - we had zero problems in outdoor use.

On the far left end of the slider we measured 2.4nits, so nighttime viewing should be equally trouble-free. The perfectly black blacks mean infinite contrast, predictably.

Color reproduction out of the box has a characteristic OLED-y look - punchy colors are more important that accuracy, right? The whites in the Default mode have a noticeable blue shift (deltaE around 9) and the overall average deltaE is 6.4 when examining a set of swatches against sRGB targets. If you move the slider all the way to the warmest setting, you'd get much better whites (though not exactly perfect with a deltaE of 4), but the average deltaE remains unimpressive at 5.6.

The Realme X runs on a 3,765mAh battery, slightly smaller than the 4,045mAh power pack of the Realme 3 Pro. The internals are essentially the same here, but the display is slightly larger (6.53" vs. 6.3") though supposedly more efficient being an OLED and all.

Setting the displays aside for a few hours, we measured 28:33h on a 3G voice call vs. the 3 Pro's 30:46, which neatly aligns with the difference in capacity between the two phones. So does the standby draw we experienced, which doesn't go on the score card but is included in the final score.

The mostly white nature of the web pages in the Wi-Fi web browsing test meant the Realme X couldn't quite match the 3 Pro's 13:48h result, but 12:27h is still plenty. And with OLED usually scoring better when playing videos, we got 16 full hours out of the X vs. the 3 Pro's 15 hours (keep in mind the smaller battery capacity on the X).

Filling in all the individual numbers in our formula, we got an overall Endurance rating of 86 hours. 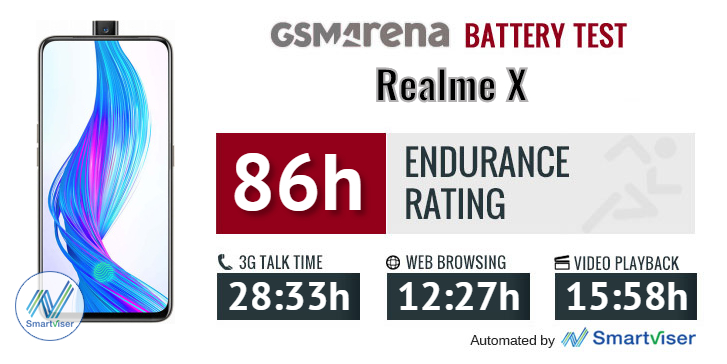 Our battery tests were automated thanks to SmartViser, using its viSer App. The endurance rating above denotes how long a single battery charge will last you if you use the Realme X for an hour each of telephony, web browsing, and video playback daily. We've established this usage pattern so that our battery results are comparable across devices in the most common day-to-day tasks. The battery testing procedure is described in detail in case you're interested in the nitty-gritty. You can check out our complete battery test table, where you can see how all of the smartphones we've tested will compare under your own typical use.

For comparison, the Galaxy A50 has nearly identical results in the screen-on tests, but some 20% lower talk time, though its better standby efficiency helps it achieve a higher overall score of 98h. The Huawei P30 lite outlasts the Realme X by a 2+ hours in web browsing, but the Realme returns a 2+-hour advantage in video playback. The Redmi Note 7 with its 14 hours in either screen-on test is in a similar position.

Unlike all those, however, the Realme X comes with VOOC fast charging capability and a 20W adaptor in the box. It fills a completely depleted battery in 1:18h and it's at the 50% mark 30 minutes into it.

The Realme X's single bottom-firing speaker is the same setup as the one on the Realme 3 Pro. In our experience, the X returned largely identical results in two of the tests, but a slightly lower number in the third test put it in the Very Good bracket. Possibly the different housing is having an effect on those particular frequencies. Other than that, we have no complaints about the sound quality.

The Realme X’s audio output is a carbon copy of the 3 Pro before it. The good thing about this is that it has excellent scores with an external amplifier combined with very high volume levels.

The not so great part is that headphones cause quite a lot of damage, dropping the loudness to just above average. We also saw a notable increase in stereo crosstalk and some intermodulation distortion. That all adds up to a solid if unspectacular showing.