Sometimes we don’t need leaks about an upcoming smartphone, because the company announces the specs one bit at a time. Redmi has just revealed the battery capacity of the upcoming K20 flagship on Weibo - it will be 4,000 mAh, confirming previous rumors. 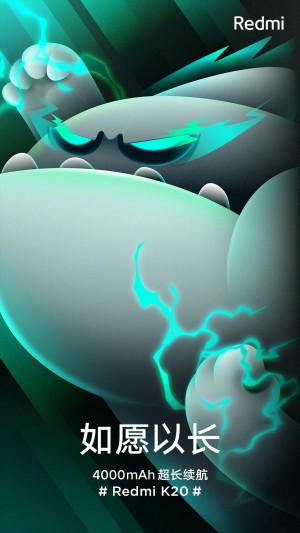 The poster simply says something in the lines of “Want More” with “4000 mAh long life” and it doesn’t get any clearer than that. Whether this will be the power cell of the regular Redmi K20 or the rumored mightier Redmi K20 Pro, we are yet to determine at the launch next Tuesday.

The 4,000 mAh capacity is not a huge deal for the Xiaomi subsidiary after all even the Redmi 3s had such a battery. The talking point is actually the expected fast-charging, which will be a first for a Redmi smartphone. The other phone from the manufacturer with such capabilities is only the flagship Mi 9 that allows for speeds up to 27W.

Seeing as how it might BE the Poco F2, you got a point.

Man do i look like CEO of Xiaomi??? No i dont know. But i hope pretty soon. We still dont know price yet. But it will be very funny seeing this phone is a competitor to Poco 2.

It seems you know something Jon Snow