The Samsung Galaxy A03s is an entry-level smartphone, and that sets the bar low in terms of design. We cannot expect premium elements like glass panels, metal pieces, or ingress protection. Solid build should be the main goal for any budget phone, and a solid build is what the Galaxy A03s has. 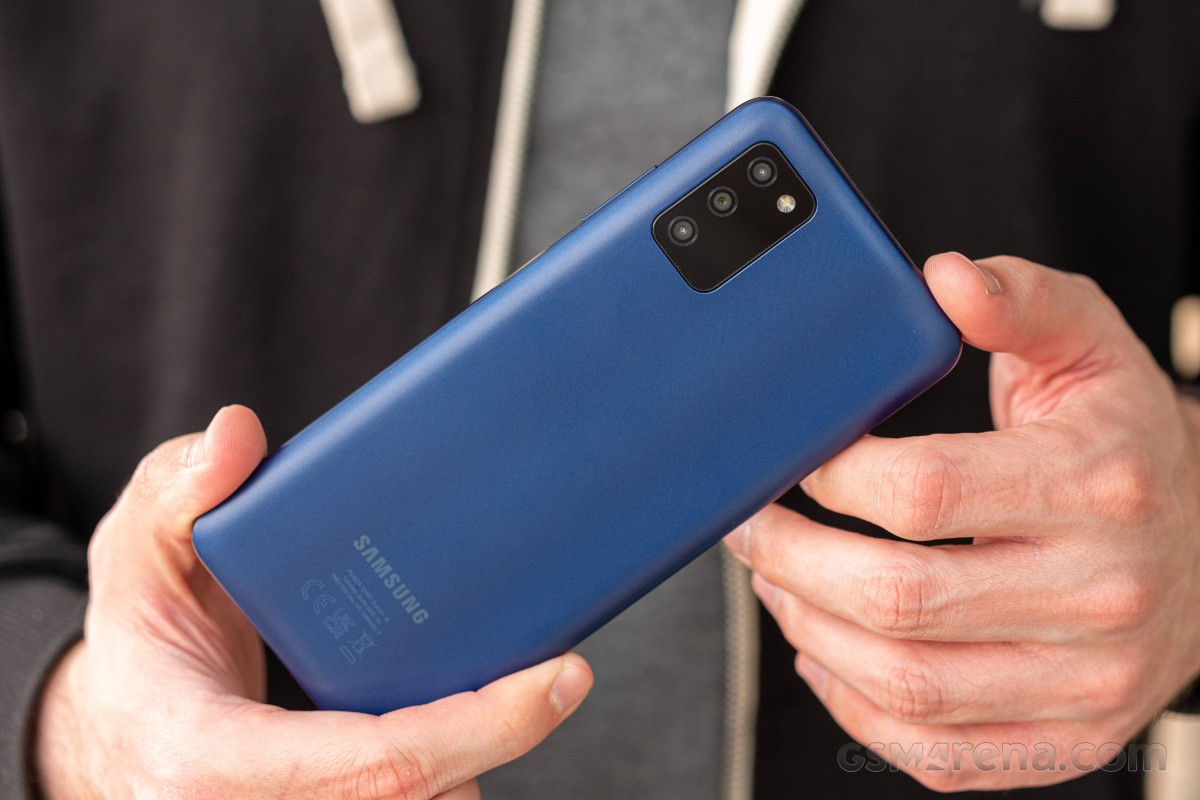 The Galaxy A03s has one of these unibody builds - Samsung has used a single piece of plastic that covers both the sides and the back. It's not a soulless panel though, on the contrary, you can see the spirit of the Galaxy A series here - the clean design, the rectangle camera, and a touch of individuality courtesy of the fingerprint-like grippy texture.

We have the Blue version of the A03s, and it is indeed beautiful in its simplicity. Smudges do stick everywhere despite the matte finish, but they aren't that visible on this color.

The 6.5-inch LCD display is at the front, naturally. It has a droplet-shaped cutout for the 5MP selfie camera and a bunch of sensors. The bezels are prominent, obviously, but it's a relatively cheap device, so we can't expect expensive traits, can we? 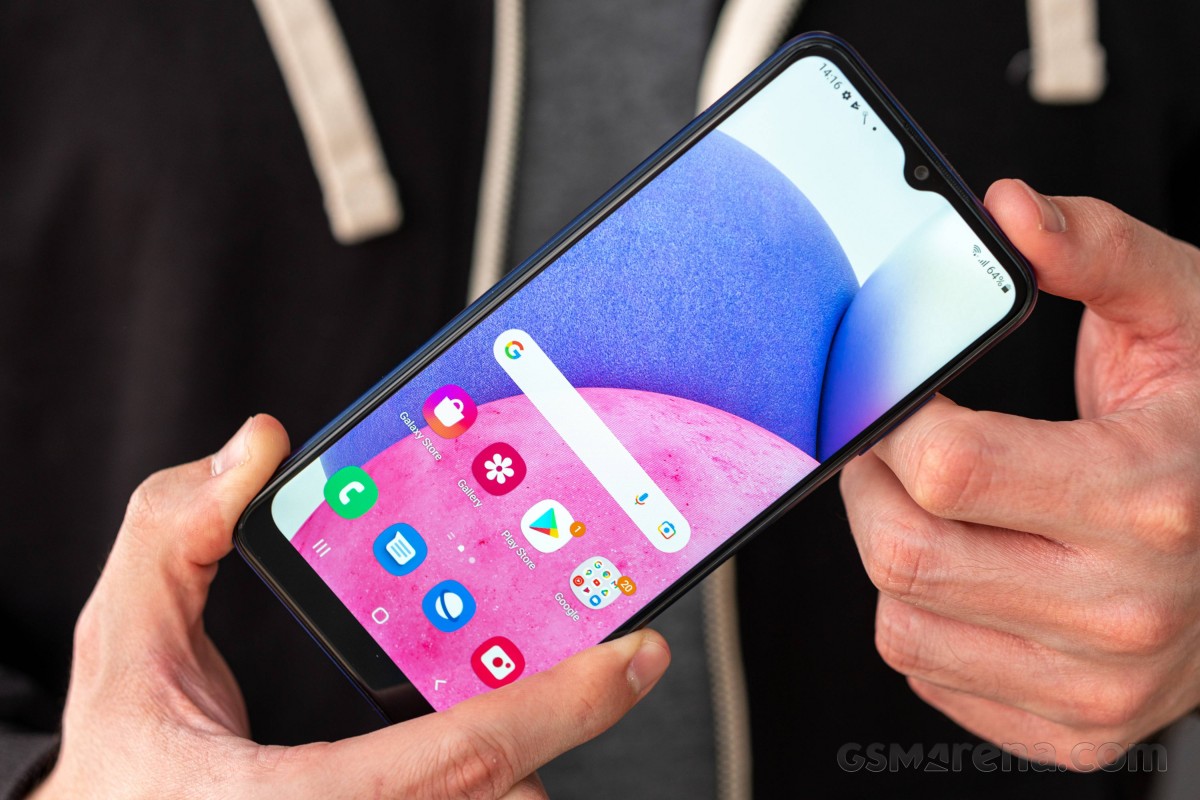 The front is covered with a flat glass sheet, but we have no info on the manufacturer. What we can tell you is that the Galaxy A03s arrives without a protective film, in stark contrast with most of the entry-level offers we've reviewed. 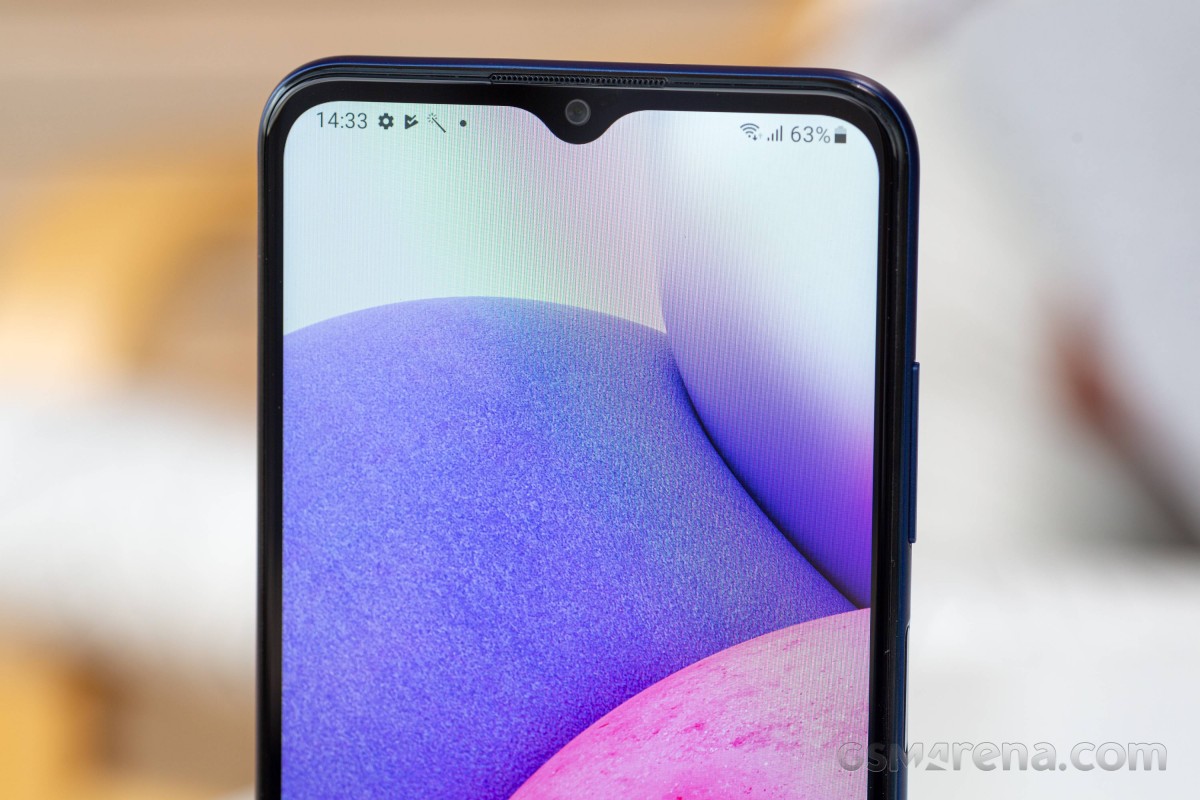 Finally, above the selfie camera, atop the glass, is the earpiece grille.

We liked the rear of the Galaxy A03s a lot - mostly because of the subtle fingerprint pattern and its excellent grip. The triple camera is the only thing of interest on the back - it's contained within the usual black rectangle, flush with the back in this case. 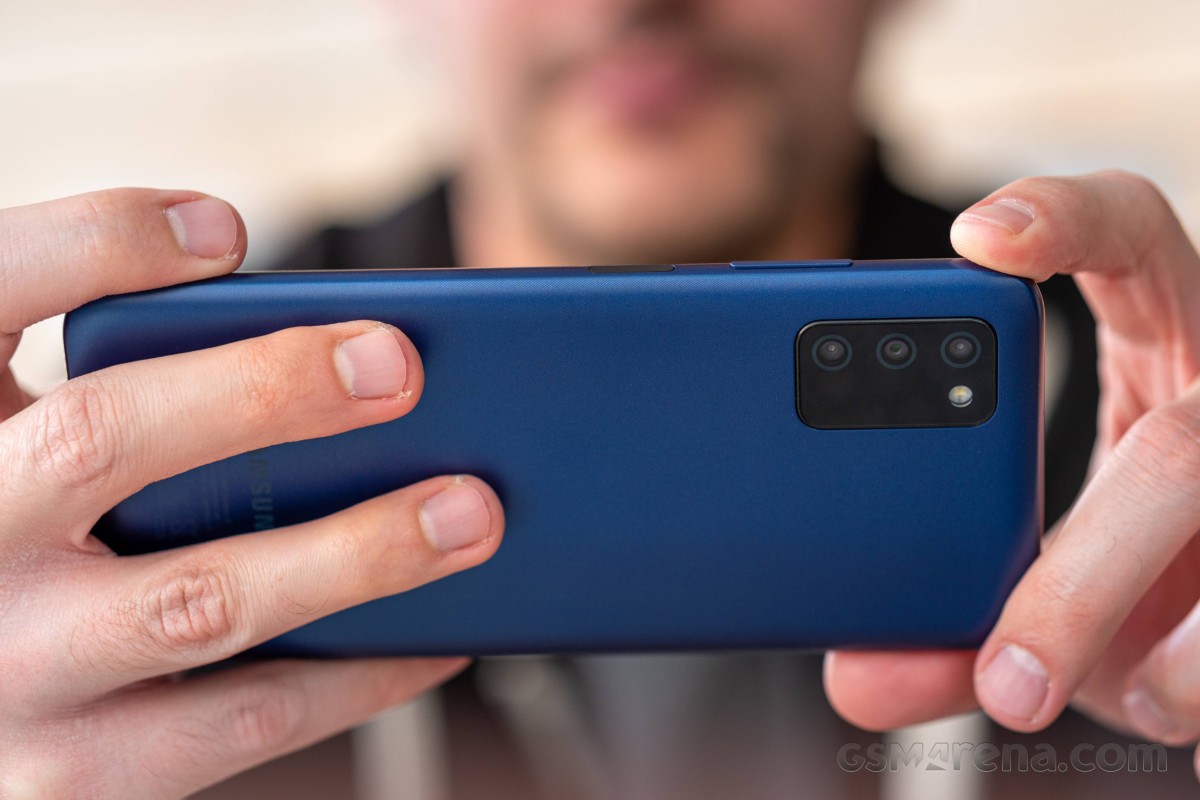 The three snappers on the back are the 2MP depth sensor, the 13MP primary shooter, and the 2MP macro cam. A single LED flash is also around. 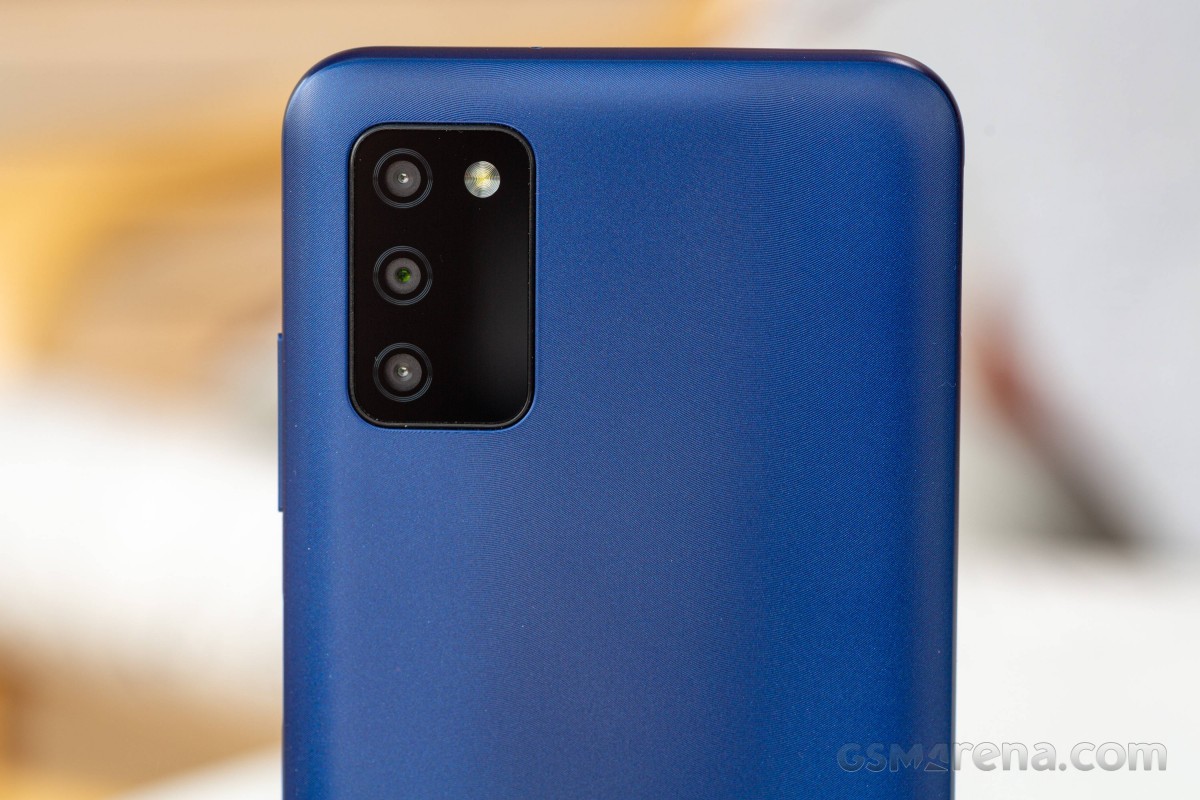 There is a lonely secondary microphone at the top. Meanwhile, the bottom is overcrowded with features - the 3.5mm jack is here, the primary mic, the USB-C port, and the loudspeaker.

The top • the bottom

The left side of the A03s houses the ejectable card hold - it can take two nano-SIM cards and a microSD. 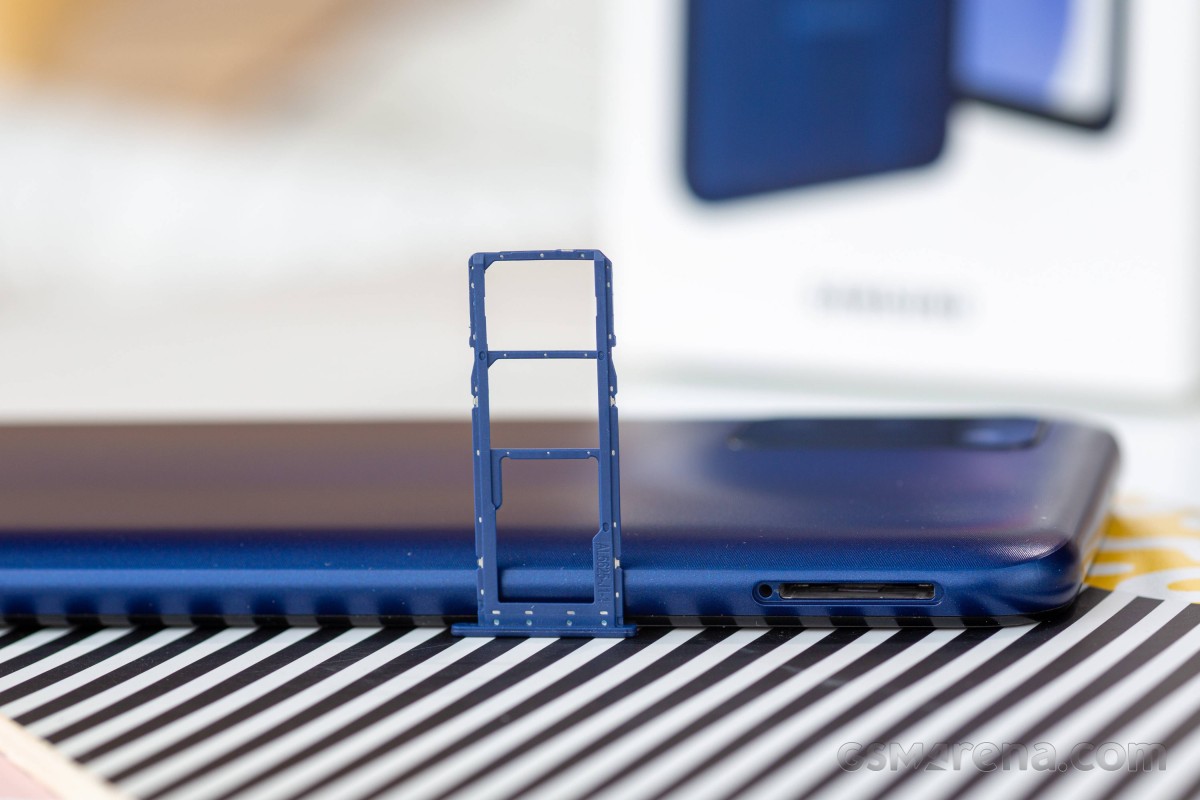 Finally, the volume rocker and the power/lock key are on the right. The surface of the power key is also your fingerprint scanner - it's of the mainstream kind - always-on and plenty fast. 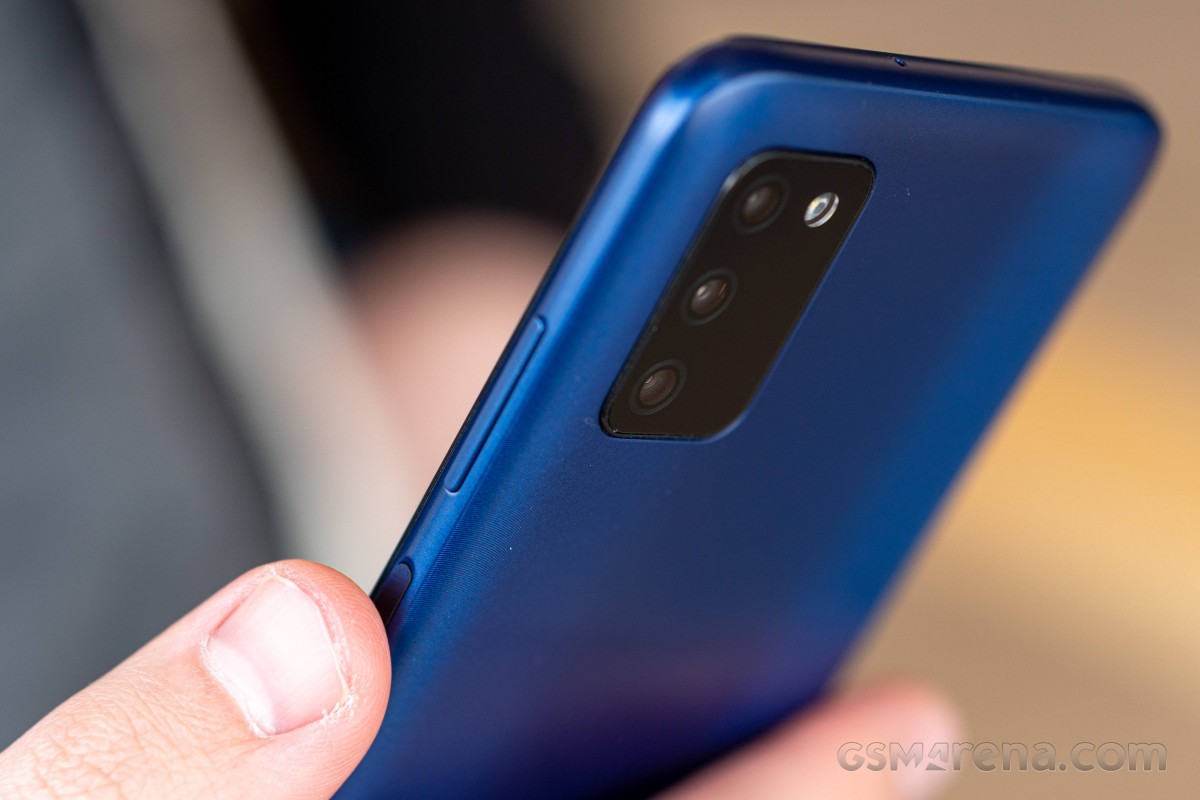 The Galaxy A03s is neither a compact nor lightweight smartphone. In fact, because of its thick screen bezels, it's as large as most of the 6.7-inch midrangers. And it weighs 196 grams, but let's not forget it packs a massive 5,000mAh battery.

So, we will remember the Galaxy A03s for their solid, no-nonsense build, clean looks and grippy design. A splash resistance would have added an extra sense of safety, but in Samsung's universe, that's not possible at this price, we guess.

Got this phone about a month ago. Phone was fine for about a week and then became the worst potato I've owned since the LG Optimus 1 almost a decade ago. Phone can't function doing the simplest of things, even with the excess bloat removed ...

The best phone in my choice

Horrible phone. The cheapest 40$ Blu is much better. Anything made in China at half this price is twice as good. Samsung did wrong on this phone. It's a huge shame on the samsung brand. Wasn't worth the risk to release a quick landfiller ph...