The Galaxy A22 is in an interesting spot when it comes to its display. It is equipped with a 6.4-inch, 90Hz Super AMOLED panel that has HDR support and is advertised to boost up to 600 nits of brightness. It is a bit lacking in the resolution department at 720 x 1600 pixels. 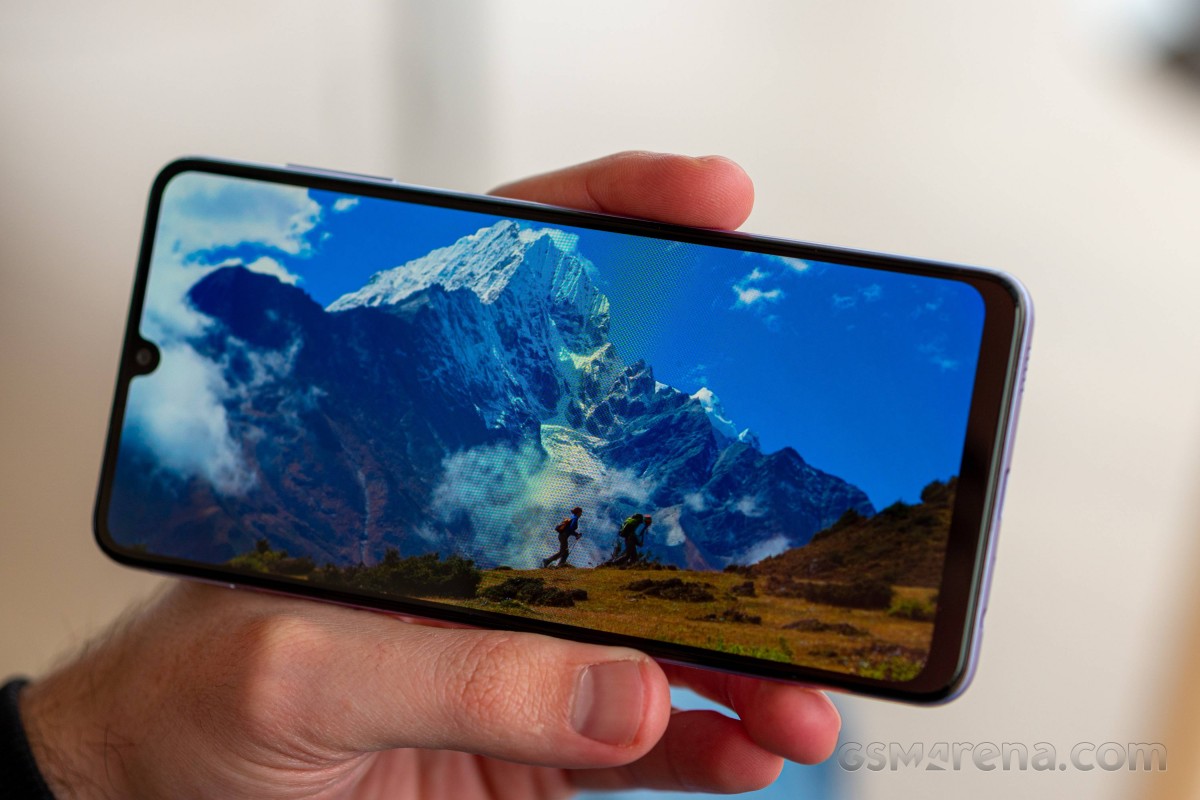 On the one hand, it is great to see OLED, which is sorely missing on the Galaxy A22 5G and without sacrificing the faster 90Hz refresh rate either. On the other, the 5G model has a larger 6.6-inch panel with 1080 x 2400 pixels resolution. As we said, the resolution is a weak point on the Galaxy A22. At HD+ and 6.4 inches diagonal, it has a pixel density of right around 274 ppi. Nowhere near the 400 or so ppi, an FHD+ panel provides at this size, and indeed you can spot the difference in sharpness if you look at the A22 alongside the A22 5G or, better yet, the Galaxy A32. To be fair, though, in isolation, the Galaxy A22 still looks perfectly sharp.

Speaking of the Galaxy A32, however, we can't neglect the fact that its 6.4-inch Super AMOLED panel does have a 1080 x 2400-pixel resolution. Plus, it does so while still maintaining a 90Hz refresh rate and by offering an excellent brightness of over 800 nits, which we verified in our review. Unfortunately, Samsung neglected to offer any HDR support on the A32, despite its excellent panel performance.

The same goes for the Galaxy A22. It does not report any HDR support. At least it does have the highest possible Widevine L1 DRM, which enables full resolution streaming from services like Netflix.

The lack of HDR is a bit of a bummer, but on the flip side, the Galaxy A22's panel offers great overall performance. Brightness is officially advertised as 600 nits, and we managed to get very close to that figure in our testing. Though, it should be noted that that figure is only achievable once auto max brightness kicks in. That, unfortunately, is a little bit unreliable and sluggish at times since the Galaxy A22 lacks a hardware light sensor and instead relies on its selfie camera to measure ambient light. We found this to occasionally be a problem when taking the phone out of a pocket in bright sunlight. Max auto mode often took a hot minute to kick in, but once it did, 600 nits were plenty. Not quite flagship-grade, especially for a Samsung, but perfectly good to be usable outdoors. We just wish Samsung sprung for a light sensor.

With auto-brightness turned off, we got just shy of 400 nits of brightness by maxing out the slider.

Brightness isn't the only strong suit of the Galaxy A22's display. It is also pretty great when it comes to color accuracy. In keeping with the recent Samsung status quo, the A22 has two color modes - Vivid and Natural. The former targets the DCI-P3 color space and also offers a color temperature slider as well as advanced per-channel correction sliders.

Vivid mode comes close to being color-accurate but doesn't quite hit the mark, which is likely by design. It keeps the three primary channels and particularly reds nicely boosted to deliver that OLED "pop" that tends to be appealing to the human eye. Natural mode, on the other hand, sticks closely to the sRGB color space and can even be considered good enough for color-sensitive work.

This has its positives and negatives, for sure, the latter mostly boiling down to the battery-wasting potential in certain situations, like watching video. 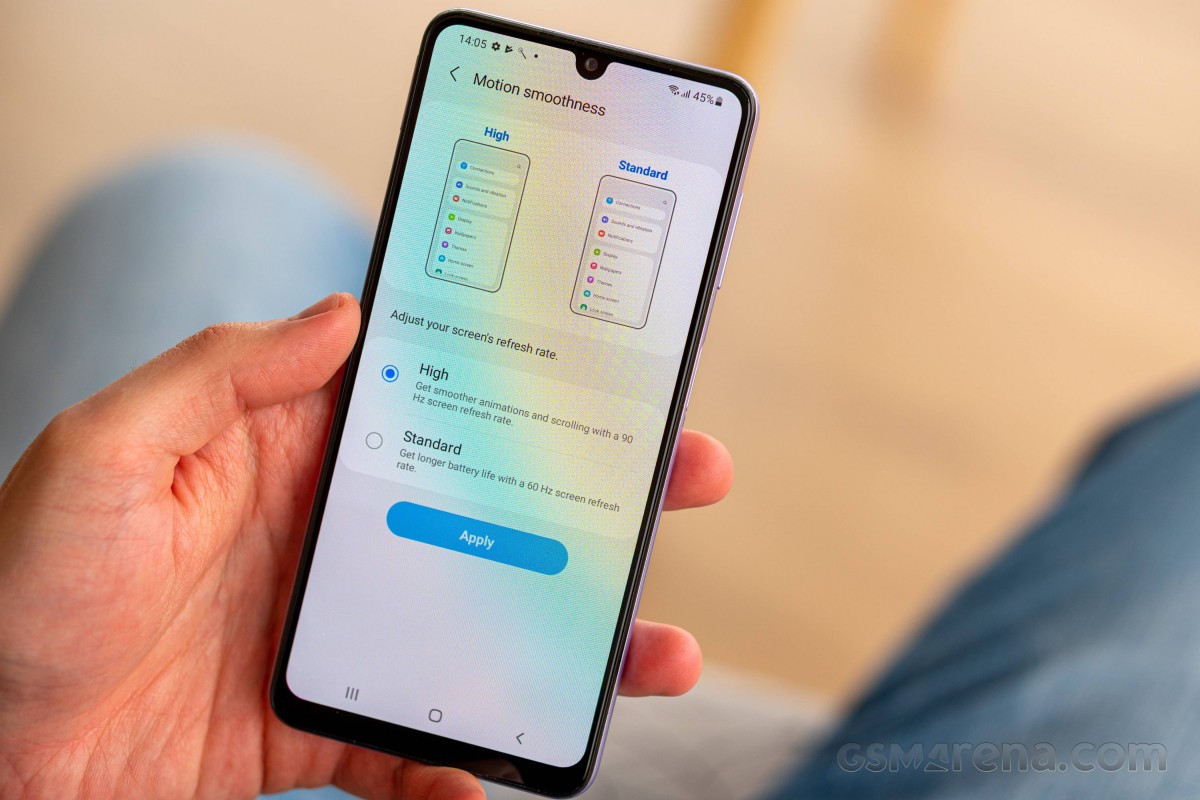 On the other hand, if you are aware of how the logic is set up and are remember to toggle down to 60Hz for things like movie watching sessions - everything else remains simple and straightforward.

Both Chrome and the Samsung browser, which we tried, take full advantage of the 90Hz refresh rate of the display, as verified by the Blurbusters UFO test.

Samsung never promised any automatic refresh rate switching. Plus, having such logic implemented in a poor way has been known to cause issues with utilizing high refresh rate modes on other devices, especially for gaming. With this simple binary system in place, we managed to get a noticeably smoother (higher than 60fps) experience from pretty much every high-refresh-rate-supported game we tried.

The only situation we managed to find where the A22 switched down to 60Hz on its own was in the camera app. This is perfectly expected since the camera viewfinder is one of those Android UI components that traditionally require 60Hz to function properly.

The Galaxy A22 is pretty predictable in the battery department. It has the same 5,000 mAh pack as the Galaxy A22 5G and A32, among others. We also have a good idea of the expected performance and efficiency of the MediaTek Helio G80 chipset - a 12nm part. In fact, as we noted, the Galaxy A32 and A22 share quite a few similarities, one of which is the aforementioned chipset. 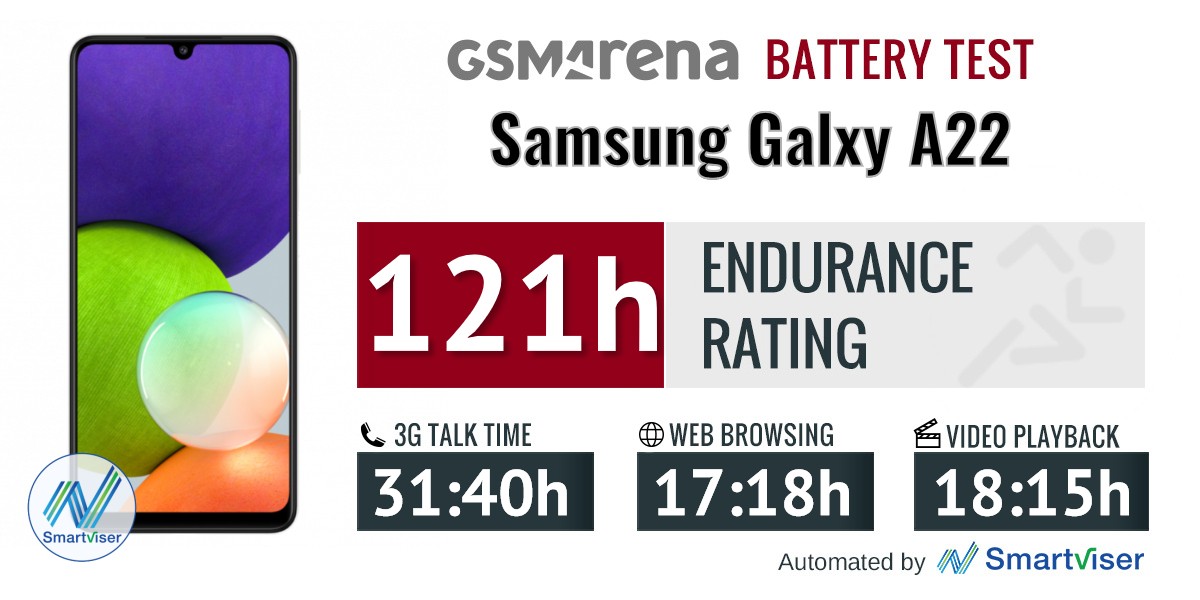 Since we already mentioned that the Galaxy A22 has comparable endurance to other similar Samsung phones, here is how it stacks up against some of its main competitors in the same price range.

For charging, the Galaxy A22 has the familiar, old Samsung-staple that is 15W Adaptive Fast Charging (based on Quick Charge 2.0). You get a matching charger in the box. Nothing special overall. In fact, the Galaxy A22 has one of the slowest charging rates around, compared to its competitors. Using it, the A22 charges from flat to full in 2:20h, with 23% showing in the battery indicator half an hour into the process. Right around what we would expect from 15W AFC on a 5,000 mAh battery and within margin of error from similar devices like the A22 5G, A32 and A32 5G. At least you get faster charging than lesser Galaxies like the A02s and A12, if that counts for something.

That actually makes it sort of the runt of the family, since even the Galaxy A32 managed a slightly louder 30.3 LUFS of output, and both the Galaxy A32 5G and A22 5G did notably better at 28.5 LUFS. At least better enough to squeeze out an 'Average' rating, that is. None of them is particularly impressive overall.

Frequency response is similar on all of these devices as well. That is to say, not overly impressive either. The Galaxy A22 doesn't have any built-in equalizers or optimizers for its loudspeaker. There is Dolby Atmos under audio settings, but that is just for headphones.

It is potentially worth noting that some competitors like the Redmi Note 10 Pro and Poco X3 do offer a stereo speaker setup.

I bought a A22 two months ago. It has severe data loading problems. Many websites and apps don't work It happens that it can't load the data of a website I need for work so I've decided to give it up and buy a new phone. The camera su...

I got a new samsung A22 , it fell off the high way , got the morther board damaged . I have been able to replace screen and other parts . But i am still in a wild search for a morther board . Please direct me where i could buy a replacement...