A new LTE variant of the Samsung Galaxy A52 is arriving soon, and the smartphone’s existence has been confirmed in a Google Play Console listing. Some of the phone’s specs have been revealed, though they’re mostly similar to those of the 5G variant.

This Galaxy A52 LTE variant is powered by the Snapdragon 720G paried with 8GB of RAM and reportedly 128GB of storage. Graphics are powered by the Adreno 618 GPU and the phone will arrive with Android 11 out of the box. 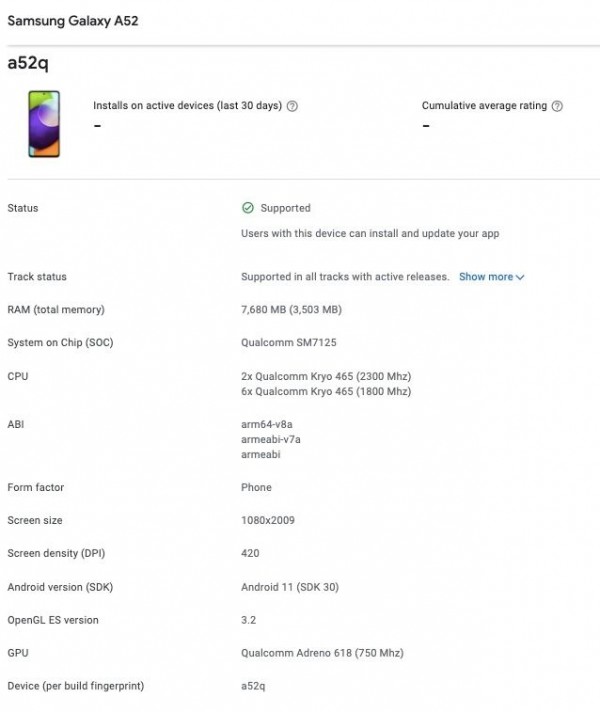 The new Galaxy-A series smartphone will expand into India with model number SM-A525F. Like the 5G model, the LTE variant will have a 6-5inch Super AMOLED display with punch-hole selfie camera. The resolution of this display is Full HD+ and it is expected to support a 90Hz refresh rate. The 5G variant, meanwhile, was reported to have a 120Hz display. The A52 may also be water resistant, but it's not clear whether both variants will be IP rated.

According to a previous report, both variants of the A52’s quad-cameras will feature a main 64MP camera, a 12MP ultrawide shooter, and two 5MP sensors – one for macro and one for depth sensing.

Samsung has not yet announced the Galaxy A52 but a recent report points to a March 17 announcement date.

Samsung announces launch event for March 17, Galaxy A52 and A72 will probably star

If they ask more than 300 then i have a bad news for them. Many other chinese competitors sell for much less far better specced devices.

Sony rumoured phone will be a successor to the L4. Probably L5. So, it will be a budget phone, not mid-range or flagship. Maybe they will do some Xperia 10 iii, but I don't think it will be less than 6.2" (plus taking into consideration the...

Samsung and Xiaomi have more bloatware than any other. Apple and Google phones doesn't have bloatware, lol. I mean, you can't consider gmail, google photos or youtube bloatware. Or mail, photos, safari. But in a way that is normal, co...