Samsung rolled out Android Pie for Galaxy A8+ (2018) over a week ago, however, the update was only rolling out in Russia. The company usually uses a single market as a sort of expanded soak test, before it begins global rollout. It seems all has gone smoothly as India has now also started receiving this latest version of Android.

The Android Pie update for Galaxy A8+ (2018) comes with One UI and weighs more than 1.2GB in size. It carries version number A730FXXU4CSCD and bumps up the Android security patch level on the phone to February 1, 2019. 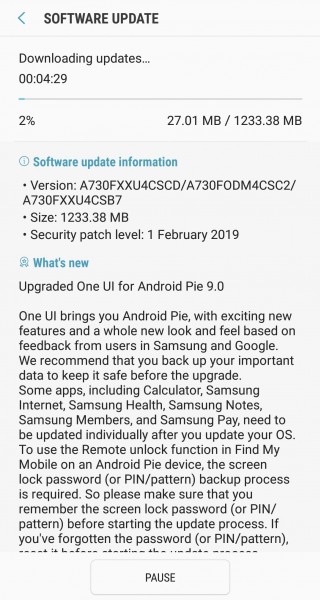 With Android Pie released in Russia and India, a wider rollout should commence any moment now so keep an eye on that notification area.

A(8)+is a perfect smart phone with excellent condition... Where can get it

Hi, I also have A8+. Are you having the same issue with me, since the update, the moisture detection keeps on notifying even though my phone is dry and did not have any contact with liquids. I am having a hard time charging my phone since it won't al...

Got an update from my Samsung a8+. I'm from the Philippines.