This is one of the few Samsung devices with an IPS display, but given its target audience, it makes sense for the company to go with the standard LCD panel. The panel we are dealing with measures 6.22" in diagonal and has an HD+ resolution of 720 x 1520px. The aspect ratio is 19:9 and has a teardrop notch on the top. Pretty minimalist.

We can't miss mentioning the slight edge bleed that we've noticed around the upper bezel and the notch. It's more prominent on a bright background and at an angle, and it's something we've seen on other low-end to mid-range phones as well. 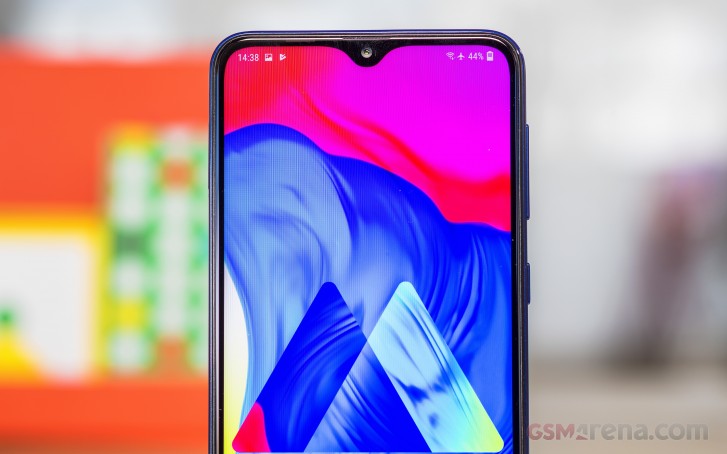 Brightness isn't impressive - just 402 nits. It will probably work for some outdoor use, but content will be barely visible in really bright environments or under direct sunlight.

And despite the use of a standard IPS display, it seems like Samsung went overboard by trying to make the screen look more like AMOLED. Colors may look pleasing, but they are way off the charts. The whites are so blue that it's hard not to see it. The turquoise is over the top as well. The average dE2000 is 5.8 and there's no way to calibrate the screen - no presets and no color temperature adjustments.

The Galaxy M10 comes with a 3,400 mAh battery and a particularly efficient Exynos 7870 chipset. However, the phone didn't exactly deliver in the screen-on tests like video playback and web browsing. The standby time, on the other hand, was pretty impressive, which could mean that the IPS display draws a little too much power than it should in on-screen tasks.

Still, an 89-hour rating isn't bad at all and should be enough to last you through a day even if you are a power user.

Our battery tests were automated thanks to SmartViser, using its viSer App. The endurance rating above denotes how long a single battery charge will last you if you use the Samsung Galaxy M10 for an hour each of telephony, web browsing, and video playback daily. We've established this usage pattern so that our battery results are comparable across devices in the most common day-to-day tasks. The battery testing procedure is described in detail in case you're interested in the nitty-gritty. You can check out our complete battery test table, where you can see how all of the smartphones we've tested will compare under your own typical use.

The charging speed, as expected, is the main drawback here. With the included charger, which is rated at just 5W, the phone charged only from 0% to 18% in 30 minutes. That's really slow.

The Galaxy M10 has a single speaker placed on the back of the phone, which isn't ideal for content consumption. When watching videos, the sound will go in the opposite direction. And to make matters worse, the loudness isn't all that impressive either. You will have trouble hearing your video or the phones ringing in loud environments.

Samsung Galaxy M10 started off brightly, finishing the active external amplifier part of our audio quality test with top marks and garnishing that with nicely high volume - much better than we’d expect in this price range.

Headphones did harm the stereo quality somewhat and caused a small spike in intermodulation distortion, so the performance here was merely 'good', rather than 'exemplary'. Still, the impressive loudness remained, so overall we’d say the Galaxy M10 punches above its weight when it comes to audio reproduction.