In the stylish white retail box of the Samsung Galaxy Nexus you will find a charger, a USB cable and a pair of premium Samsung earbuds.

A case of some sort and an MHL adapter would have been a welcome addition to the retail box of the Galaxy Nexus. Even in its current configuration though, it has your basic needs covered.

The Samsung Galaxy Nexus has retained the impressive curved screen of its predecessor – a good idea as it is currently a feature found only in the Samsung made Nexus Devices.

With measures of 135.5 x 67.9 x 8.9 mm, the smartphone has loads of presence. Thankfully, its slim profile and modest 135 grams of weight bode well for its pocketability.

As you can notice from the pictures above, the Galaxy Nexus is only a tad bigger than the Galaxy SII, despite its monster of a screen. This can be contributed to the fact that the phone has no hardware buttons at its front, thus saving precious space.

With the design of the Galaxy Nexus, Samsung have accomplished something, which was rather unthinkable until recently. The smartphone has merely two hardware buttons. Combined with its dark gray color scheme, the device is a celebration of understated design. The slightly curved screen, while paying homage to its predecessor, does not make the Galaxy Nexus look overly familiar – it is simply like nothing else on the market in terms of design.

The build quality of the Galaxy Nexus is superb. The back is made from grippy plastic (intriguingly called Hyper Skin), while the display has gotten the oleophobic treatment. Both features leave absolutely no room for fingerprints. While many might frown over the lack of any metal in the device’s construction, we do believe that the weight benefit from this step is well worth it.

The 4.65” Super AMOLED screen with HD resolution is nothing short than a thing of beauty. The bump in the number of pixels is a perfect complement to a display, which has been among the industry benchmarks for quite some time now. Its contrast ratio and viewing angles are still to be matched by its competition.

The contrast, of course, being infinite. We measured the brightness levels of the screen and they turned out surprisingly low. Putting the Galaxy Nexus next to the Galaxy Note, it doesn't seem that much dimmer. The difference certainly isn't the 73% that the numbers suggest.


Below the display of the Galaxy Nexus you will find… absolutely nothing. We surely hope that the lack of hardware buttons is what the future holds for Android smartphones. It looks quite neat on the Galaxy Nexus.

Things begin to look more familiar above the screen of the device. It is the home of the earpiece, ambient light and proximity sensors, as well as the front-facing camera unit.

A familiar sight above the screen

The volume rocker is on the left side of the device. On the right side, you will find the power/lock key.

There is nothing happening on the top of the Galaxy Nexus. All you are going to see there is a tiny latch for removing the battery cover.

The view on top

The bottom of the device is much busier. It houses the microUSB port, 3.5mm jack, and the microphone – just like in the case of the Nexus S.

The bottom of the smartphone looks familiar

On the back of the Galaxy Nexus is where the 5MP camera with LED flash resides. It is kept company by the loudspeaker, which is located on the, typical for all upscale Samsung smartphones, chin at the bottom.

It is business as usual under the paper thin battery cover. All you are going to find there is the beefy 1750mAh battery and the SIM card slot.

Nothing unusual under the battery cover

In our battery test, the Samsung Galaxy Nexus performed rather poorly. It lasted only 31 hours of combined usage, which is one of the lowest times we've seen yet. It did okay as far as talk time goes - 8 hours and 23 minutes - and the video playback time was about average (6 hours and 2 minutes). Web browsing was abysmal however, lasting only a couple of minutes over 3 hours starting from a full charge. 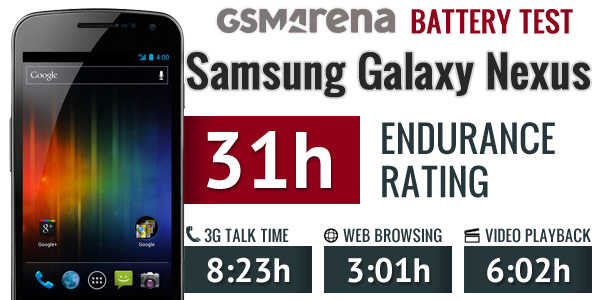 You can check our thorough battery test over at our blog.

The Samsung Galaxy Nexus is easy to handle, despite its massive size. The Hyper Skin material on the back is great in preventing accidental drops. It even allows you to operate the device with one hand without worrying about accidents.

The phone handles great for its size

We can’t find anything to frown about, regarding the design and build quality of the Samsung Galaxy Nexus. The smartphone is a massive improvement over its predecessor in terms of quality and feel – both now match its unique looks.

We are now going to take a journey into the depths of Google’s latest Android 4.0 Ice Cream Sandwich OS. With premium hardware coming from just about every manufacturer these days, we believe that the software experience will drive the Galaxy Nexus sales.

How could I find Samsung google phone shop on sh

Hello! I have a question for anyone who can help me out. I have a samsung galaxy nexus 9250l and my problem is that from a while it begins to shut him self out and then restart again by it self. I was wondering if some one can give me a advice or...

Not true,you can select an option that makes all calls from a certain contact divert directly to your voicemail / answering machine and it doesn't even ring. If that person sends you an SMS/MMS you don't get the notification ,however it does show in ...