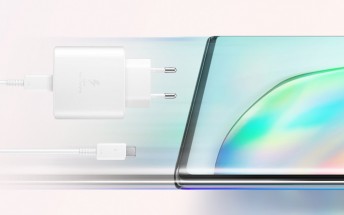 There was some grumbling that Samsung didn’t bundle a 45W charger with the Galaxy Note10+, even though the phone supports it. Instead, you get a 25W charger in the box – and as it turns out, this is still enough to beat the competition from 0% to 100% battery charge.

The Galaxy Note10+ finished charging in 1 hour and 5 minutes – that’s 20 minutes faster than the OnePlus 7 Pro, despite having a larger battery. How does that work? Simple – the maximum power of the charger can only be used when the battery is relatively empty.

And sure enough, the 30W Warp Charger of the OnePlus 7 Pro gets an early lead slows down significantly near the end – down to 10W. Meanwhile, the 25W charger that comes with the Note10+ only drops to 15W when the battery is nearly full.

You can see a graph of the battery charge of the four phones at the 9:30 mark in the video. The Samsung phone charges at a constant rate until just over 60% while the OnePlus charger slows a bit at 20% and 40% (and several times more before it hits 100%).

Samsung claims that charging the Note10+ for 30 minutes is enough to last you through the day. And looking back at that charge, that's good enough for a 60% charge if you start with a dead battery.

Now one question remains – how much faster will the Galaxy Note10+ charge with a 45W charger?

Our Samsung Galaxy Note10 and Note10+ hands-on video is up

Weekly poll: is the Samsung Galaxy Note10 duo a hit or a miss?