This year's first edition of one of the most exciting annual smartphone events has finally arrived - the tenth-generation Samsung Galaxy S flagship series has been Unpacked. For the first time it's four of them - three regular ones that everyone is going to get plus an extra special edition with a less mainstream appeal.

The regular range goes like this - the fully tricked out top-end Galaxy S10+, the smaller Galaxy S10 that's one selfie camera short, and the even more compact and slightly lower-specced Galaxy S10e (yes, also to be available in Canary Yellow). Then the icing on the cake is the Galaxy S10 5G model that's even bigger than the Plus, and has ToF cameras front and back, bringing the total to six.

We had the opportunity to spend some brief moments in the company of the four Galaxies, and we'll be sharing some early impressions.

But first, let's quickly go over the specs. This year, Samsung's introducing an ultra-wide angle cam to complement the regular and telephoto setup of last year's Plus. And this same triple-module configuration is also to be found on the smaller S10 unlike the S9 generation - the vanilla model there got a downgraded single-cam like it was 2016. Even so, the S10 is one camera short of the S10+ - it's only got a single selfie camera to the S10+'s tandem shooter. 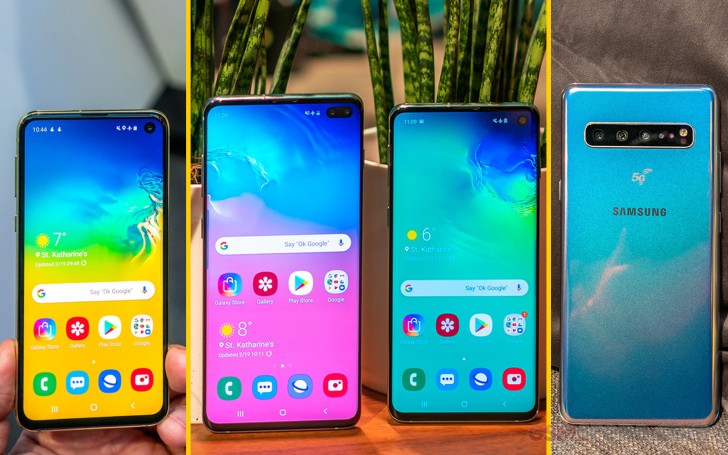 Moving on, the Galaxy S10e misses the telephoto module on the back, and it too has a single front facing cam - a total of three imagers then, to the S10's four and the Plus's five.

And then comes the Galaxy S10 5G that adds a ToF module to the triple-camera configuration of the S10 and S10+ for a rather ridiculously big camera array on the back. Another ToF module graces the front, joining the 10MP selfie cam, and makes for an even more unsightly cutout than the already somewhat objectionable one on the Galaxy S10+.

There's a similar segmentation with display sizes - the S10 5G is the largest at 6.7 inches in diagonal, with screens going down in size in each other of the other three. All of them are Infinity-O displays (punch holes for the front cameras), all of them are Dynamic AMOLED (where'd the 'Super' go?), and all of them are HDR10 capable. Only the Galaxy S10e's panel is flat and of 1080p resolution, the rest have curved edges and 1440p resolution. Another sacrifice has been made for the S10e's lower price and it's the fingerprint reader - unlike the ultrasonic under-display modules of its more expensive brothers, this one has it in the power button on the side, just like the Galaxy A7 (2018).

And that pretty much rounds up the principal differences between the members of the Galaxy S10 lineup. Oh, we almost forgot - the Galaxy S10e gets an exclusive Canary Yellow paint job that other two will be missing out on, while a certain premium Performance edition of the S10+ will come with ceramic backs in white or black.

For a more convenient side-by-side comparison, check out the table below that has all the important numbers.

With the technical side of things more or less sorted out, let's head out into the hands-on area. 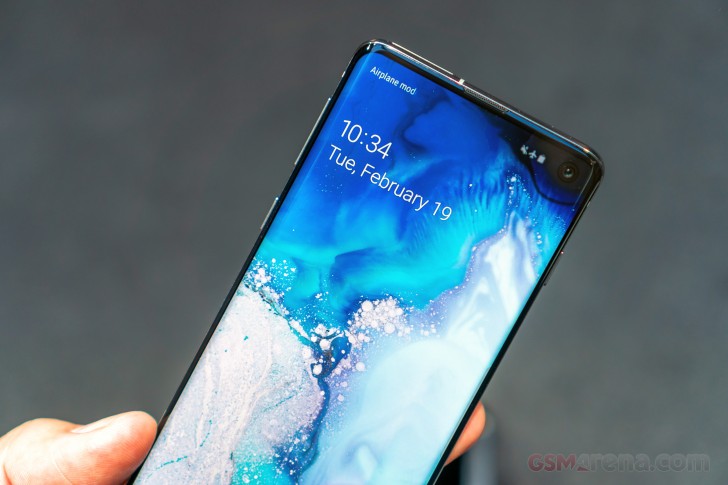 that good i am using