Unpacking 2021 with a bang, we have the Samsung Galaxy S21 for you today. Samsung has rearranged its yearly release schedule to pull its high-end S-series reveal for January, and could there be a better way to kick off the year?

We did say 'bang', but it's hardly the most thunderous of those - out of the trio of Galaxy S21 phones announced, we'll now be presenting you the smallest, vanilla one. We also have the Ultra at the office, but you'll need to wait a bit more for that - no event starts off with the headliner anyway.

For the second year in a row, Samsung unveils three phones as part of the spring flagship roster (even though it's very much winter this time around, at least where we are). And, much like last time, there's a very clear divide between the ultimate uncompromising Ultra and the two more restrained and down-to-earth 'regular' S phones. If anything, the gap has even widened.

The examples are plenty, some of them more significant than others. Take the displays for example. Unlike last year when all three phones had 1440p resolution panels, now only the Ultra gets the higher resolution, the 'mainstream' S21s stand at 1080p. All three screens were curved in 2020, now it's just the Ultra. All three S20s had the same high-refresh rate implementation, now the Ultra gets a more advanced Adaptive mode than the other two. 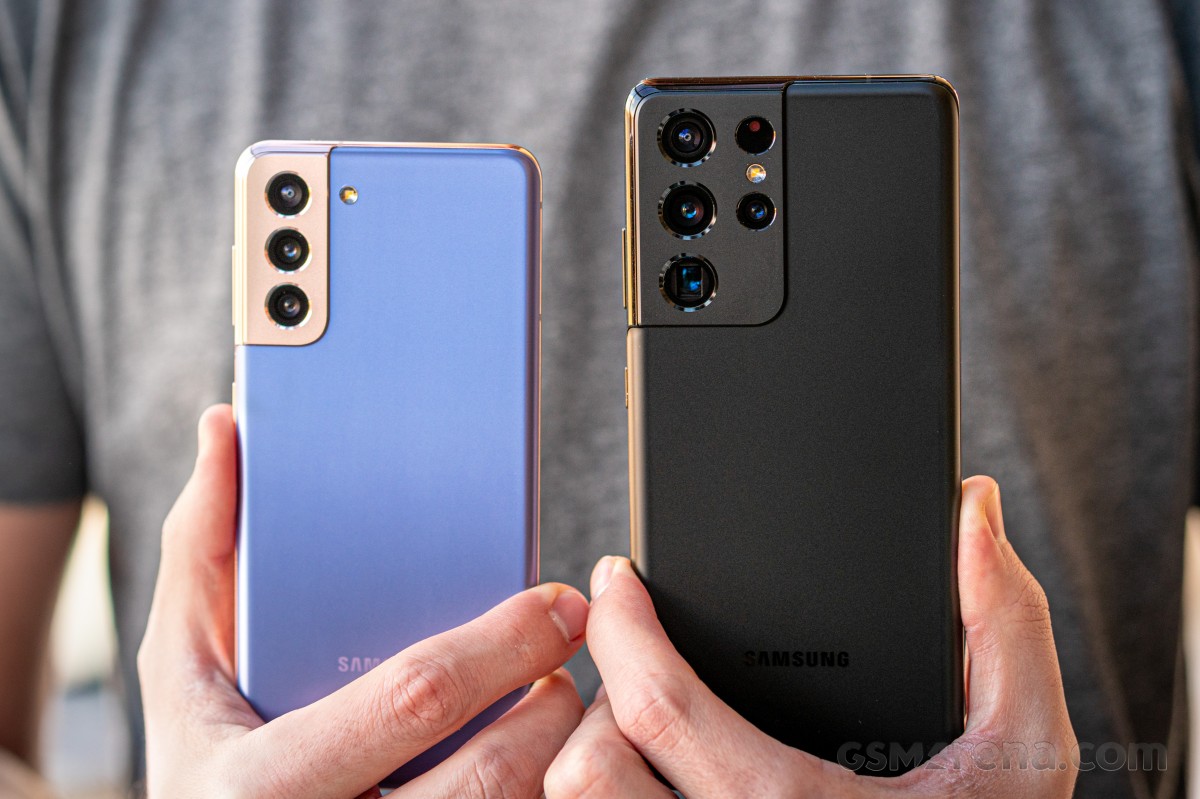 How about the cameras? The S20 Ultra had a vastly superior setup than the other two, regardless of issues it might have had with realizing the full potential of all of its impressive hardware. Well, the S21 Ultra builds on top of that and comes with further improved internals in the imaging department. The S21 and S21+, meanwhile, reuse last year's bits. Hmm.

But there's more. In the case of the small Galaxy S21 we have here, a final blow hurts the most - it's got a plastic back. It's hardly the end of the world, and we'll go on to rationalize how that's actually a good thing on the next page. But it goes to emphasize the further differentiation between the one true flagship and the others that stand below it. And then further down below it. 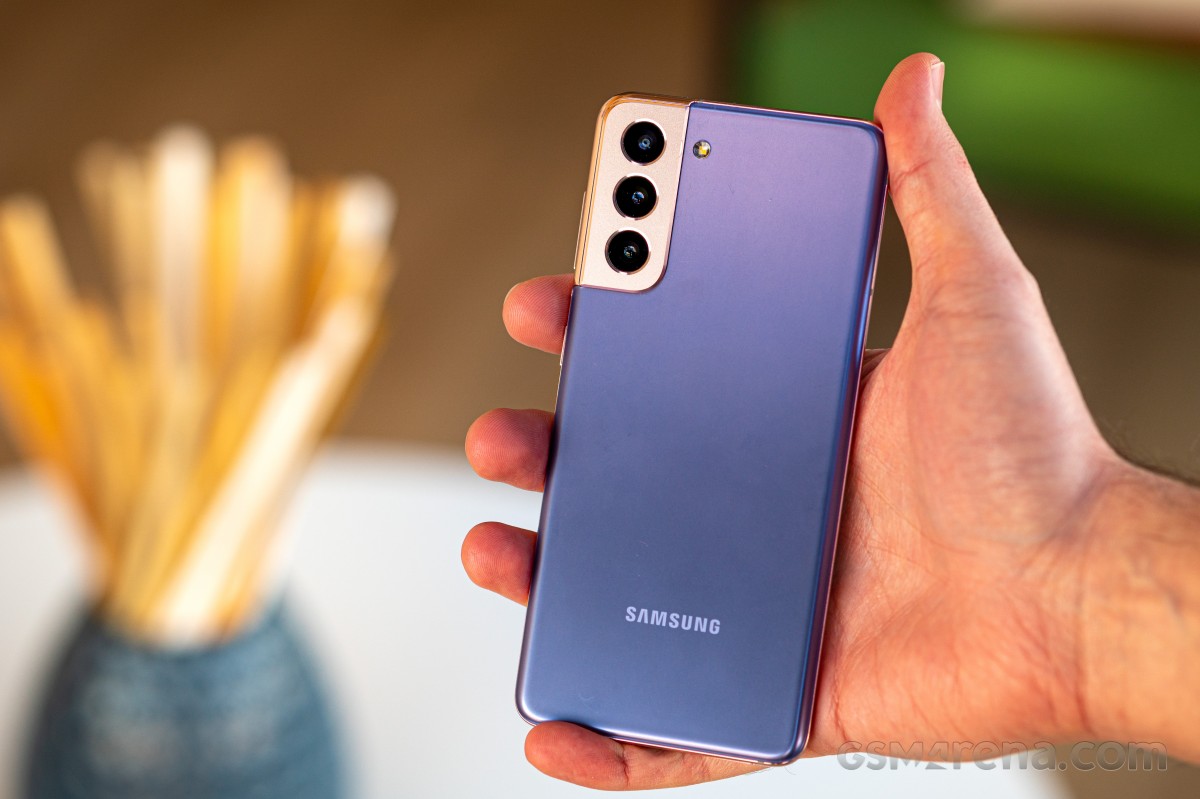 Some genes are shared among all in the family, after all. The chipset is the same on all three (still different from region to region, but that's a whole other topic), all have the second-gen ultrasonic fingerprint reader from Qualcomm, as well as stereo speakers and IP68 rating for dust and water resistance. And no, none of them has a microSD slot, that one was most surprising.

Here it is, the high-end Galaxies' new and improved (read 'smaller') retail box. Following in the footsteps of Apple, Samsung has chosen to remove the charger and headphones from the retail bundle, resulting in a more compact box. 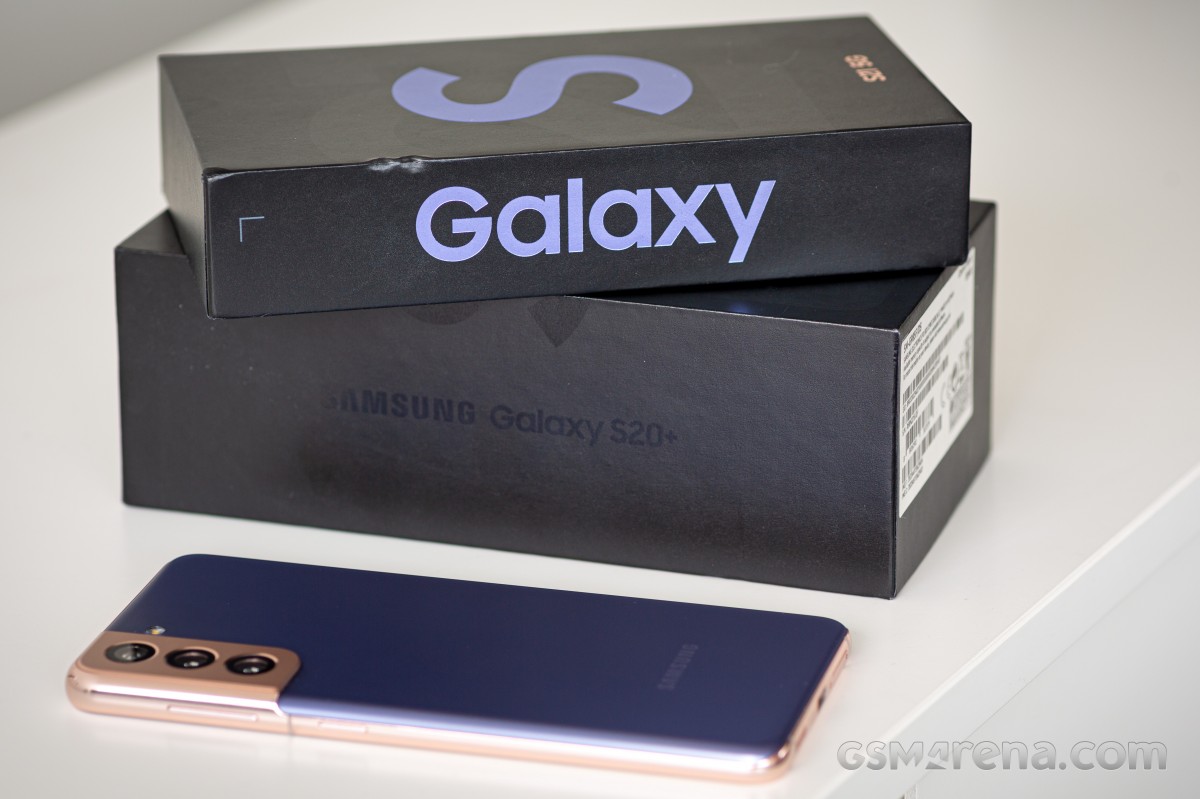 Yes, yes, you're supposed to already have chargers at home, so not including one with every phone should help reduce waste, plus the decreased shipping volume will lower the carbon footprint along the logistics chain. It's a noble concept though somehow saving the environment still doesn't feel like the key driving factor.

Having said that, at the S21 keynote, Samsung mentioned that adapters will now be sold at a reduced price, and this seems like a step in the right direction. 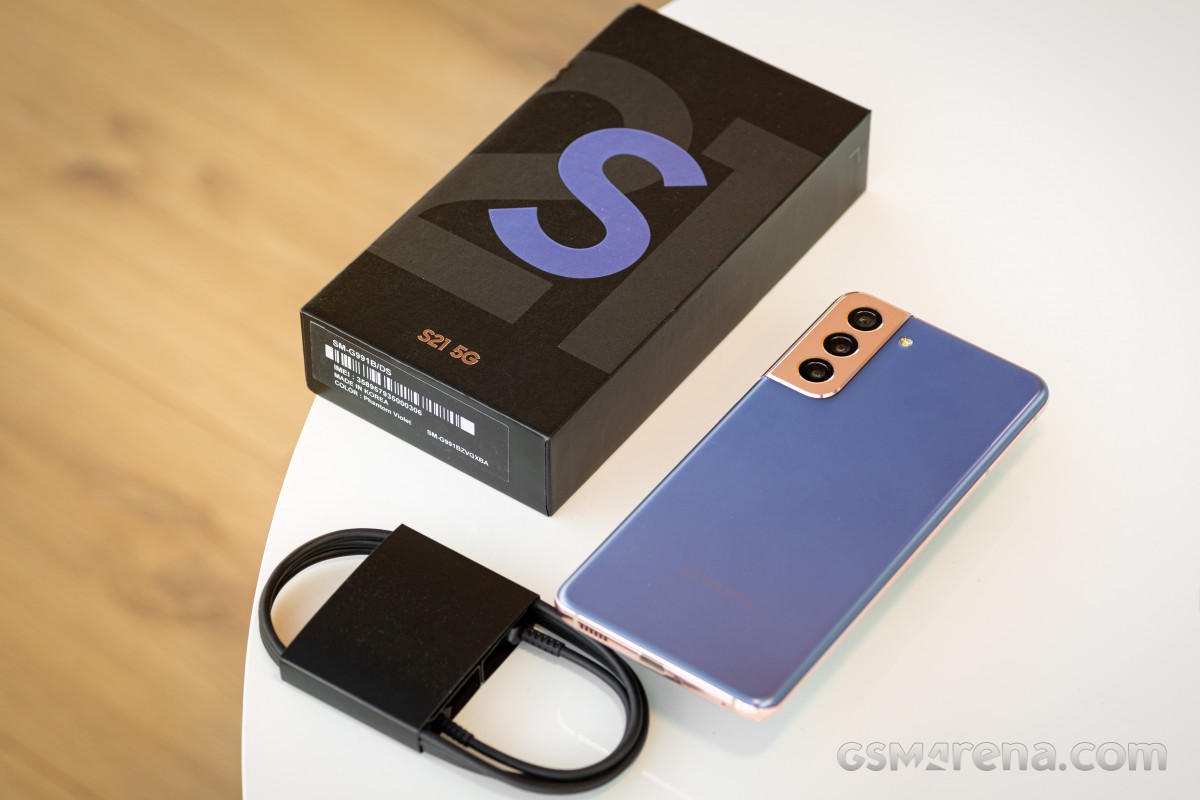 Anyway, what you are getting in the box is the phone itself and a USB-C-to-C cable. That sort of means you need to have a moderately contemporary USB PowerDelivery charger lying around, or a USB-A-to-C cable if you intend to use an adapter that doesn't have a Type C out.

As it came to light around the iPhone 12 launch days, local regulations in France specifically mandate that all phones sold in the country come with a headset. So S21s in France will indeed ship with the usual set of AKG-branded earbuds we've gotten used to from Galaxies in recent years. Still no charger, though.

IP68 so dustproof and waterproof