After a couple of generations of mostly iterative design, the Galaxy S21 family's styling includes a few bolder strokes. A camera bump like no other, two-tone colorways, matte back panels - the 2021 models have a distinct look. 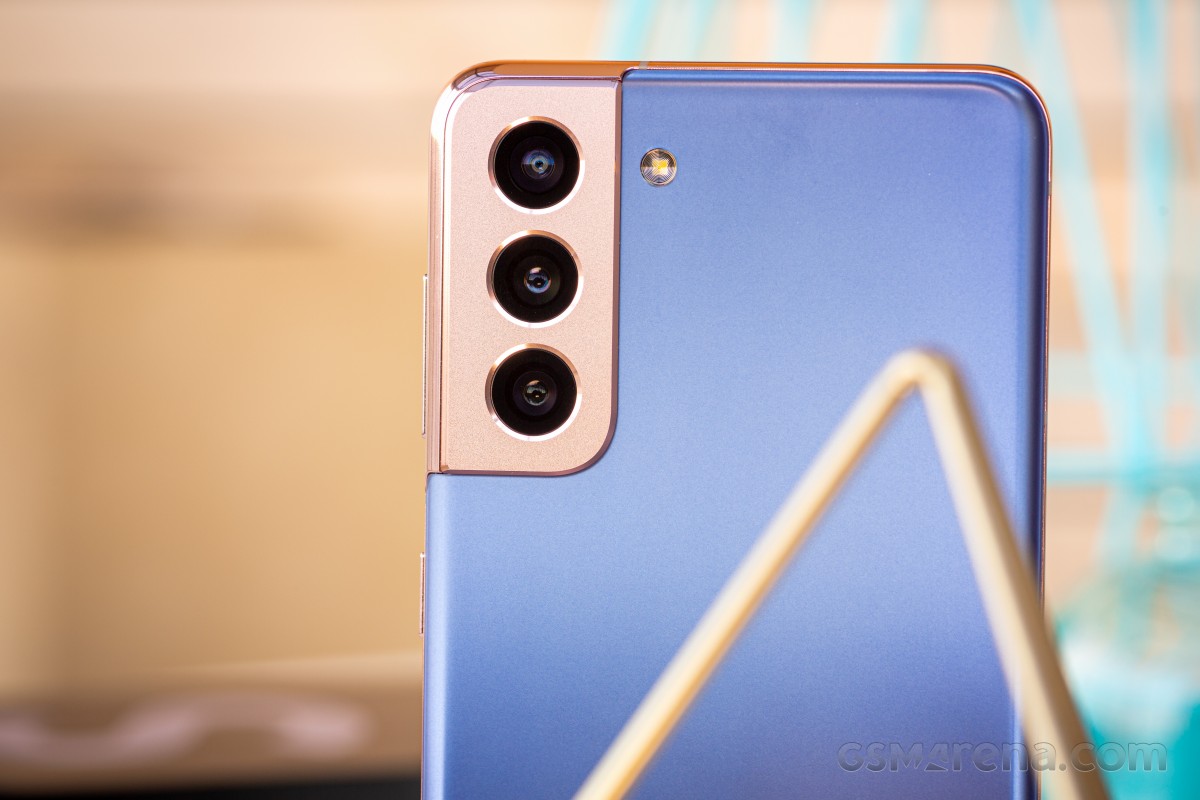 What used to be a camera island is now... a peninsula - the aluminum frame flows right into the raised camera cluster in the top left corner. With camera modules requiring more thickness than makers want to add to the entirety of their phones, we've seen all sorts of attempts to either mask the protrusions or accentuate them further, turning them into design elements. Samsung's done the latter this time, and we'd say it's worked out nicely.

The bump isn't an integral part of the frame; that would have made (dis-)assembling the phone straight-up impossible. It appears to be made of metal itself - the chamfered edges can file off fingernails, which looks like enough proof to us. 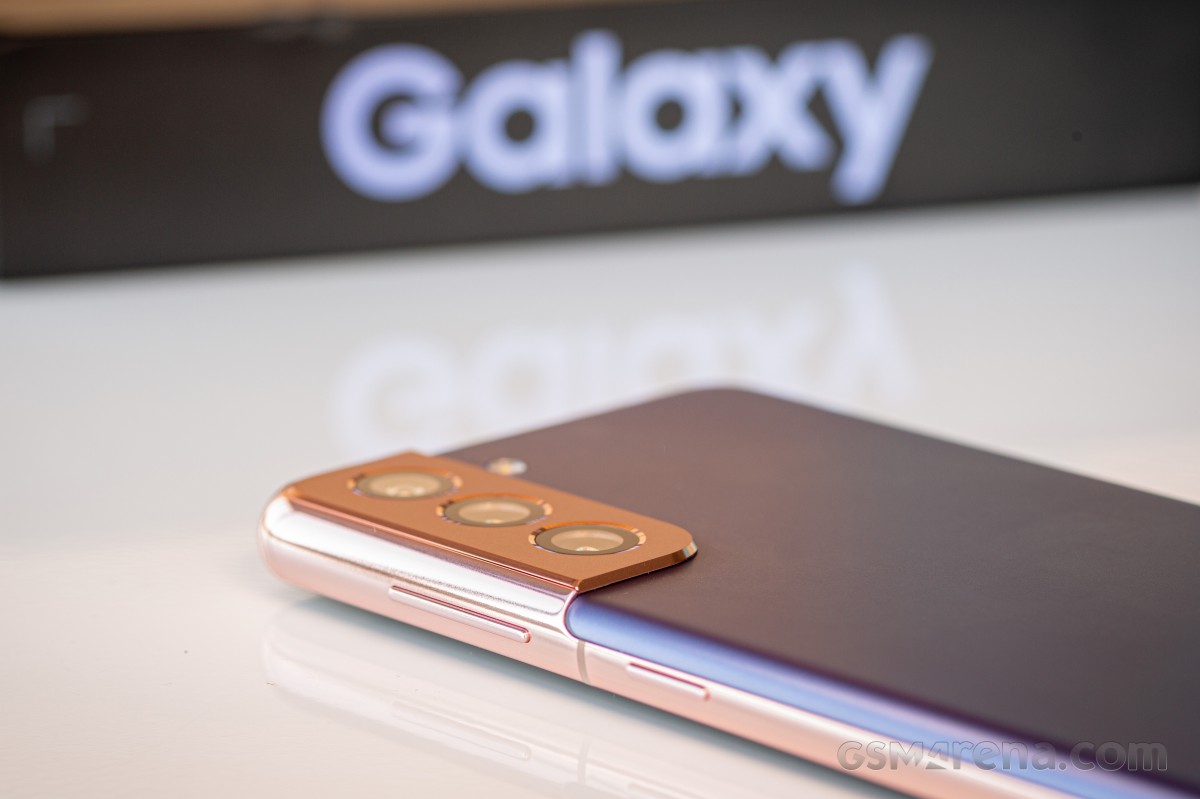 Our review unit is in this year's hero color scheme - Phantom Violet. That means a bluish-violet back panel and a contrasting rose gold frame. It's easy to default to an opinion that this particular variant is targeted to a more feminine audience. Still, our predominantly male office seems to universally like it, so make of that what you will. 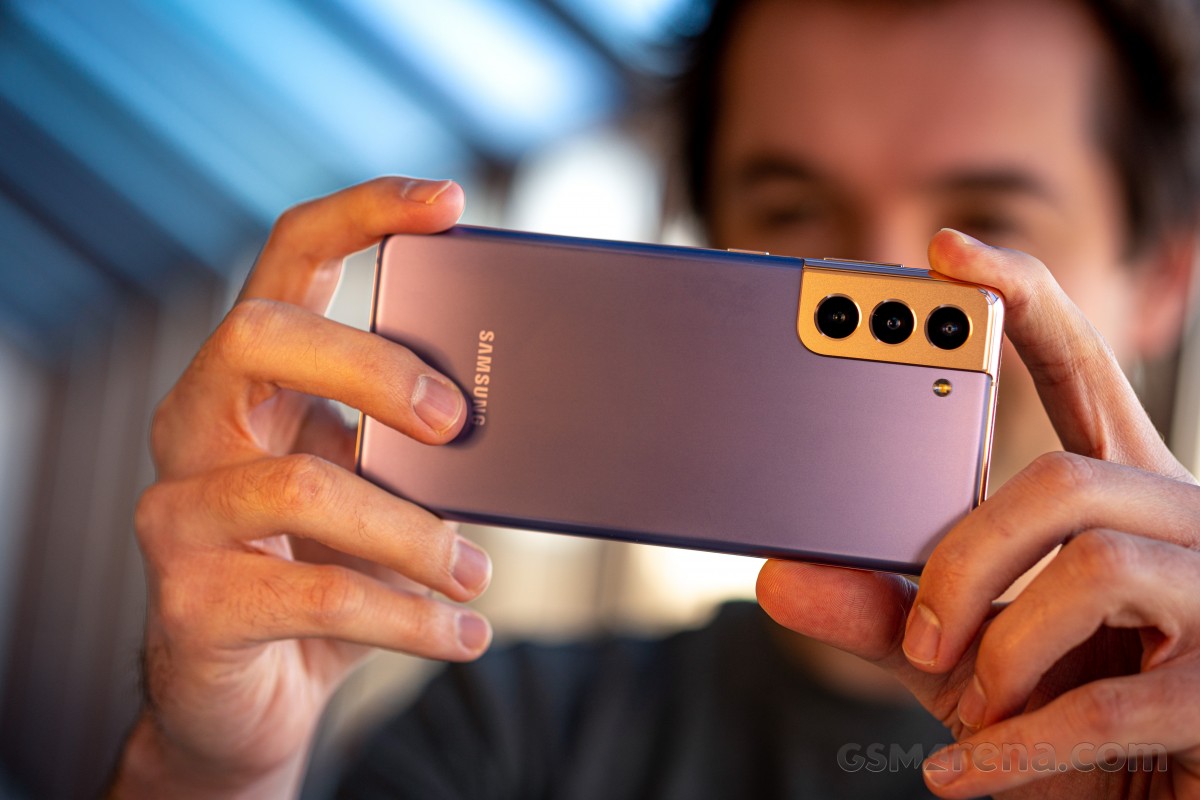 Where we haven't really reached a consensus is our stance on the back panel. It's got a frosted matte finish, much like all the other phones in this year's lineup, and that's great for warding off fingerprints, something the S20s failed miserably at. This one is plastic, however, and that's just not premium, is it? And the Galaxy S21 is supposed to be premium, even if it's the smallest of the trio.

That's where the plastic should help, though. If you're picking up the S21 in particular, you're probably doing so because it's compact, more pocket-friendly, lighter. Light it is, at 169g for a Sub6 version or 171g for mmWave, but even so, it's at least 6g heavier than the model it replaces despite packing the same size display and battery capacity. A glass panel would have added a further extra gram or two, and Samsung (and your average compact phone fan) wouldn't have wanted that. Plus, a plastic rear panel would be more forgiving to drops. Not very premium, though. 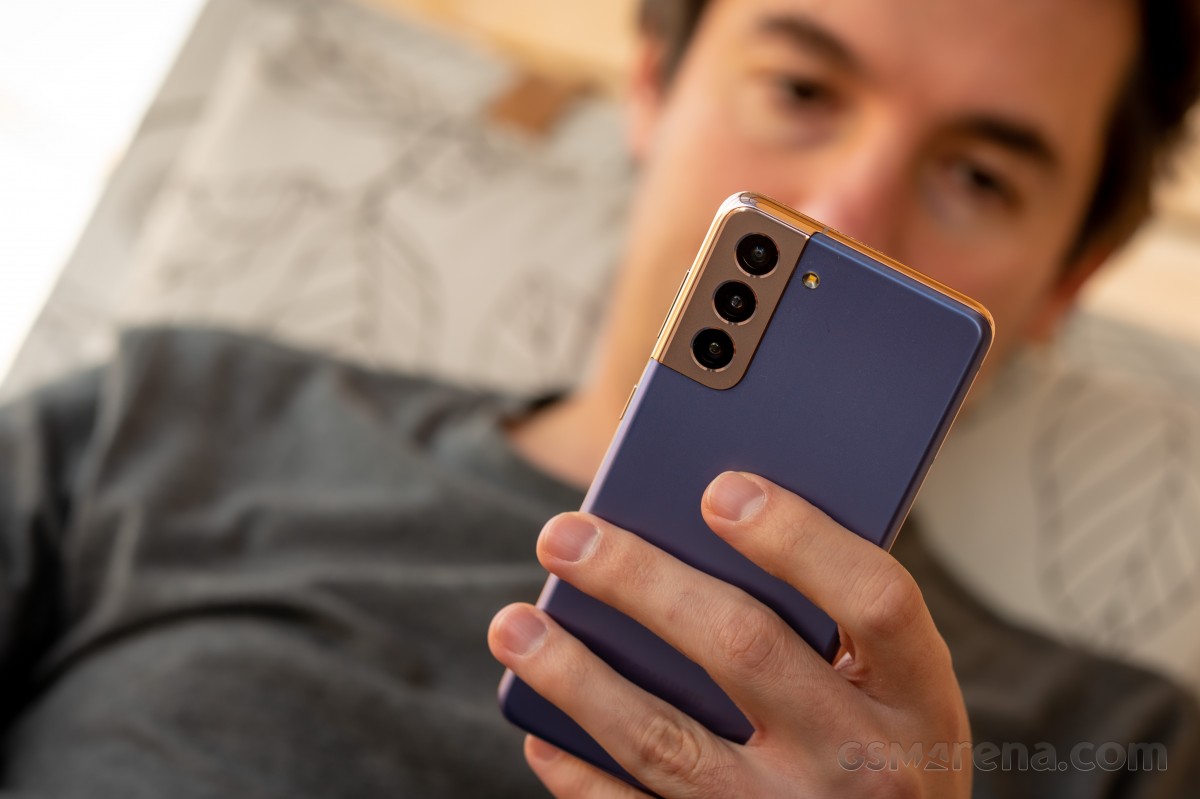 When fondling the S21 and S21 Ultra for comparison purposes, we'd say that the Ultra's back finish is smoother, and the S21 ever so slightly coarser. It's very similar-feeling to the Galaxy S20 FE, itself a plastic-backed phone, and possibly the Note20 non-Ultra (we haven't reviewed one).

Having said that, our perception could be tainted by simply knowing one is plastic, the other is glass. Our point is, the Galaxy S21's back, plastic as it may be, isn't meaningfully inferior in feeling to the glass ones on the Ultra and the Plus. Not very premium still, no.

Let's transfer that sentiment over to the front of the phone where bezels have made a return. The S21 has the same nominal display diagonal as the S20, yet it's a good 2mm wider than the older model. We're pinning that to a marginally thicker frame and the abandonment of display curves - where the S20 had slightly sloping side edges, the S21 is flat. Hardly a deal-breaking offence on the S21's part, but thin bezels and curved displays have come to be associated with expensive high-end devices, and the new model takes a step backward in this respect. 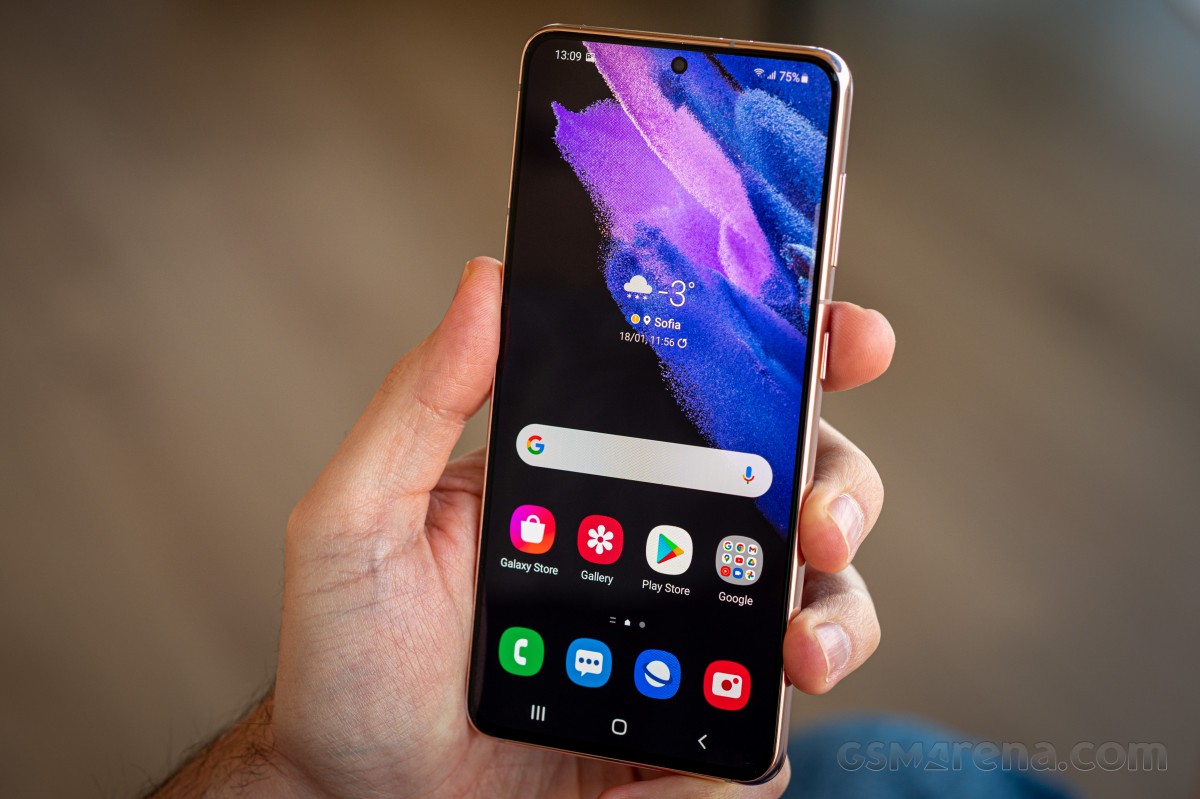 We're almost at the point of wondering why, if that's the direction Samsung went into, aren't the black strips on the sides as thick as the one on the bottom. Surely, we would have whined they're too thick, but at least we would have gotten uniformity. Conveniently, the pre-installed wallpapers help conceal the source of this particular petty complaint of ours. 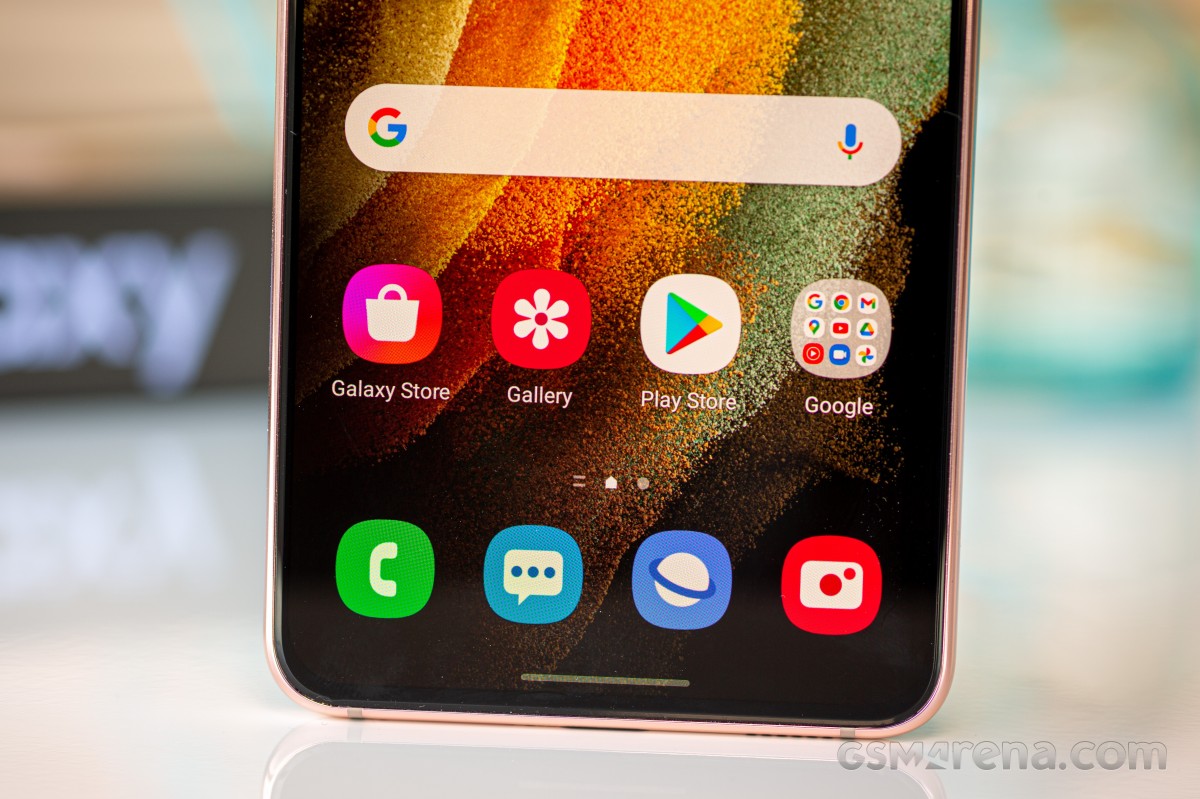 The selfie camera punch-hole is as tiny as Samsung makes them, and it's good to see the S21 isn't being treated differently just because it's the smallest of the trio.

It gets parity in other areas too - stereo speakers, for example. The top driver is hidden behind the display, but the sound comes out through the thinnest of slits where the top edge of the Gorilla Glass Victus meets the frame. 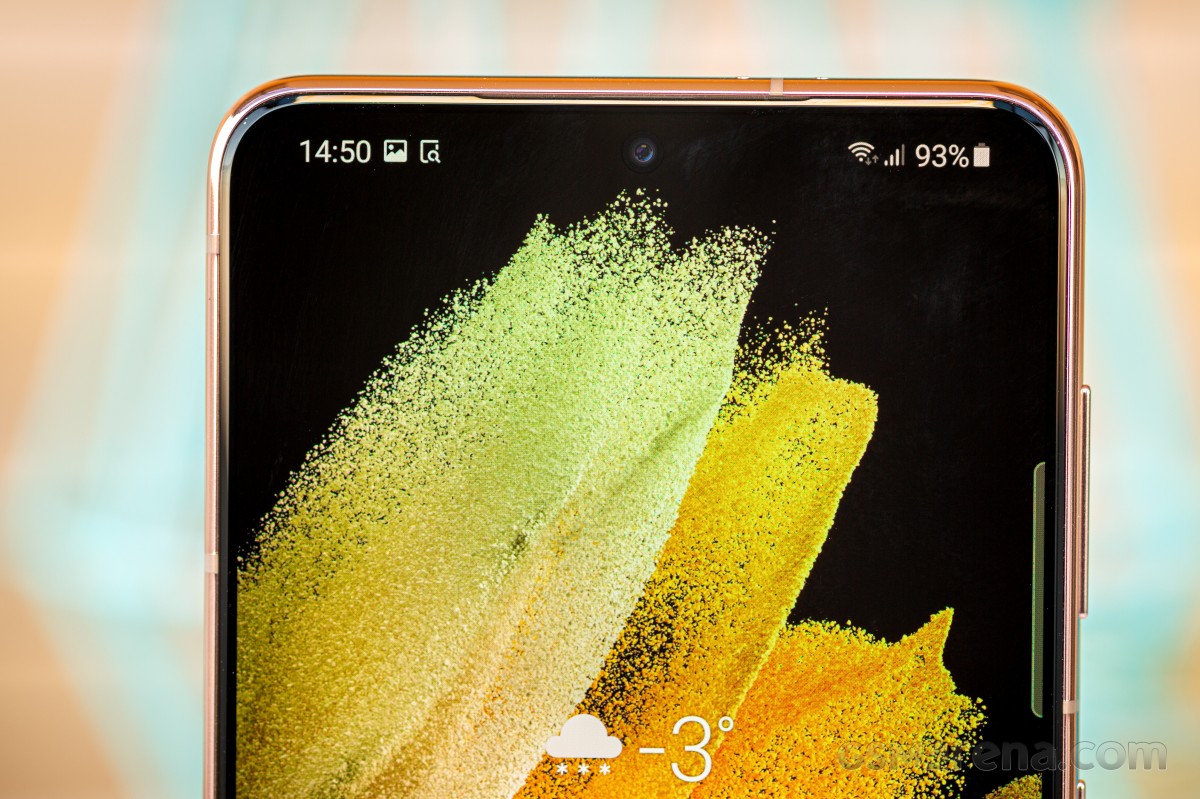 Another shared attribute is the new, second-gen ultrasonic fingerprint reader from Qualcomm. An 8mm square instead of the 4x9mm rectangle of the first one, this new model offers a larger scanning area. It should deliver a superior user experience than the often criticized unit introduced on the S10 and used until now.

We say it 'should', but we can also report that it, indeed, does. The unsuccessful unlock attempts we've had during the review process are maybe in the single digits, and there's hardly a complaint to be made in this regard. The speed of the actual unlock procedure perhaps remains a fraction of a second slower than what the best of the competitors can muster, and if you're into high-speed cameras and timing stuff like that, do hit us up with a number. In any case, a trip to the Developer options and lowering the animations scale is an easy fix for a more immediate response. 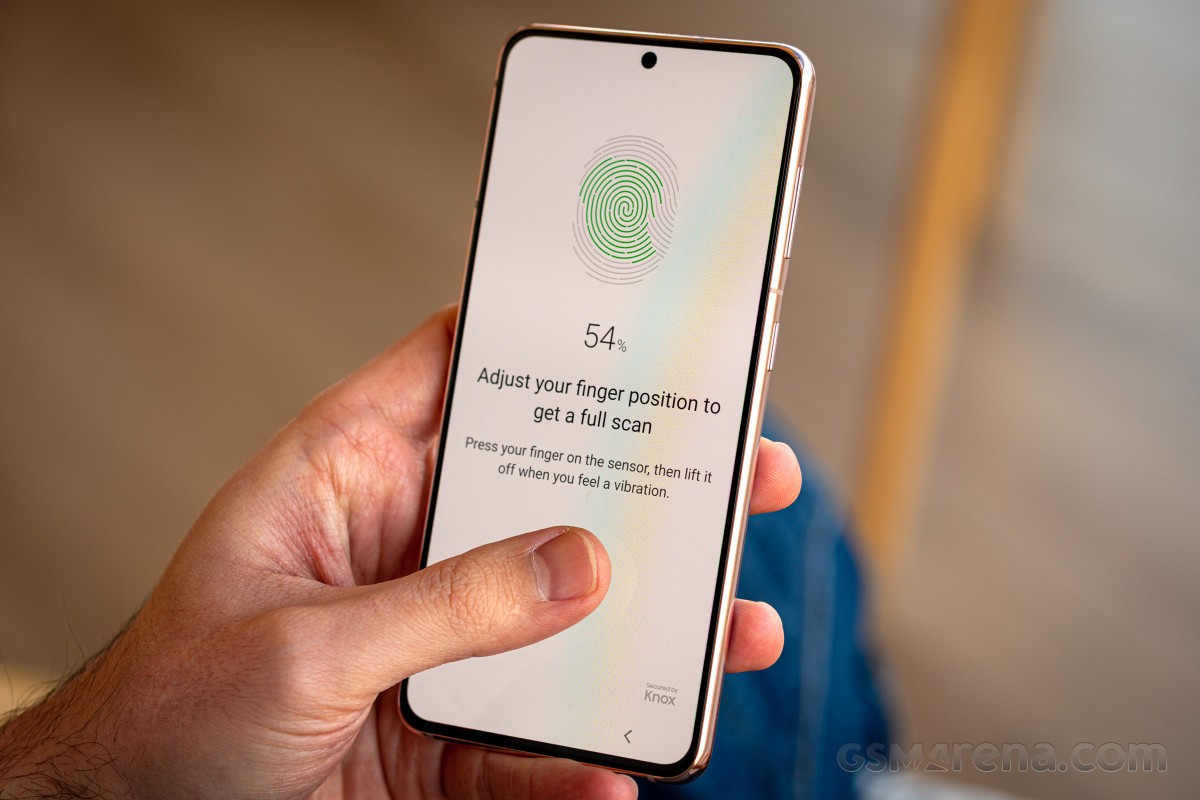 Now, the Galaxy S21 does come with a plastic foil type of screen protector pre-installed, and since it can get in the way of several aspects of our review process, we removed it so our fingerprint experience is based on using the phone without it. However, this being a factory-applied sheet by the manufacturer itself, we can't imagine it would be detrimental to the sensor's operation. On the other hand, with third-party protection, be it plastic or glass, your mileage will likely vary.

Going over the perimeter of the S21, we're seeing the power button in its customary spot on the right, about a centimeter above the mid-point. The volume rocker is further up, almost too high maybe, but an antenna strip in between it and the power button suggests that other concerns took priority over ideal ergonomics of volume control operation. 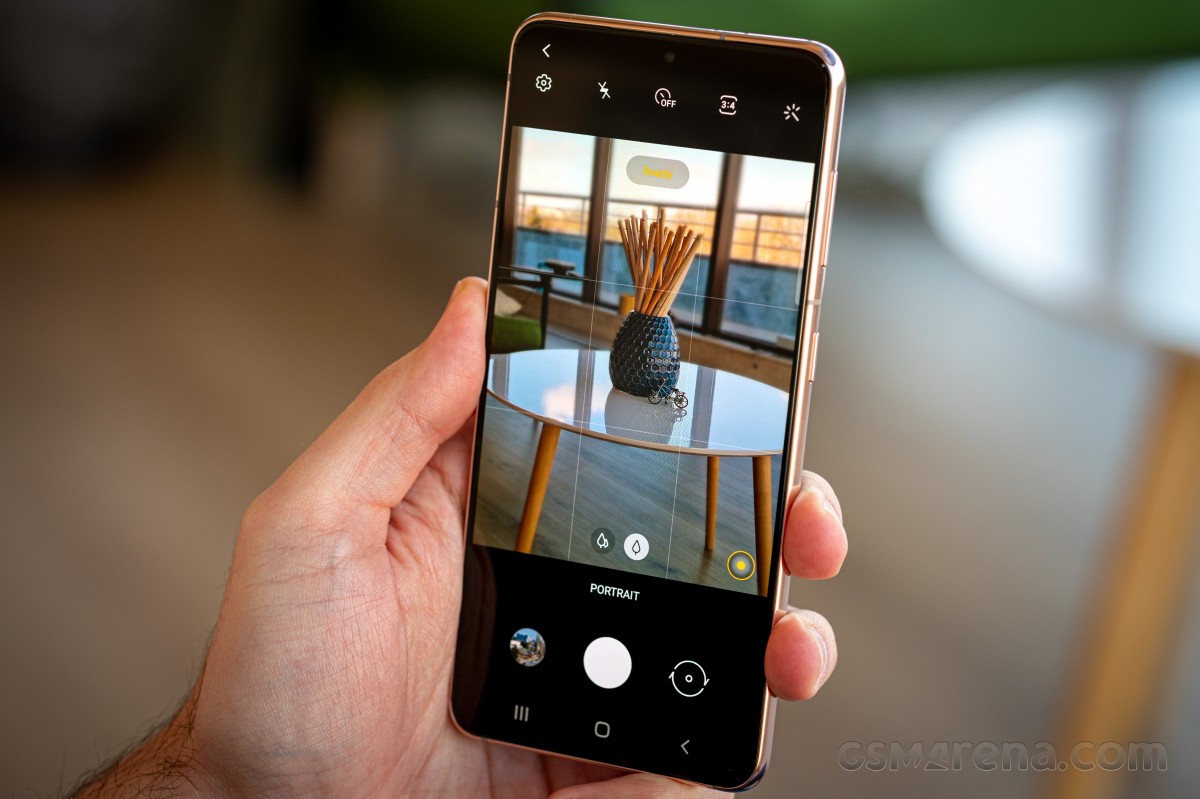 Something took priority over expandable storage too, because there's no provision for it on the S21. The card tray will only take SIM cards (nano, one or two depending on whether you get a single-SIM or a dual-SIM version), but not microSD.

Headphone jacks are in the Samsung flagship past, and there isn't one on the Galaxy S21 either. A USB-C port can still be found on the bottom of the handset, though with Apple's war on ports and Samsung's tendency to... follow their corner-cutting steps, we can see that disappear in a few years. Okay, maybe not really.

A mic and a loudspeaker complete the list of things you'd find on the bottom of the S21.

Two pinholes are the only things of note on the top of the phone after the relocation of the card tray to the bottom. One of these is a microphone, the other is a port for the earpiece/loudspeaker to breathe.

which phone did you get the exynos or the snapdragon version.....

Great phone. I upgraded from a S9 and wasn't expecting such a big leap in performance, screen and software. Battery is great for me, no overheating and I can't go back to a regular 60hz screen, 120hz is so smooth.

My phone is overheating