Update (03 Feb 2017): The Android 7.0 Nougat update for the Galaxy S7 edge is here and we've covered the differences in-depth in a dedicated article. Be sure to read it for a more current perspective on the Samsung flagship's software. For more info on the original Marshmallow-based interface, continue reading below.

The Samsung Galaxy S7 edge runs a TouchWiz-skinned Android 6.0.1 Marshmallow and is among the company's first smartphones to offer it right out of the box. The Marshmallow OS has native support for fingerprint readers, app manager, Doze mode, among other tweaks. 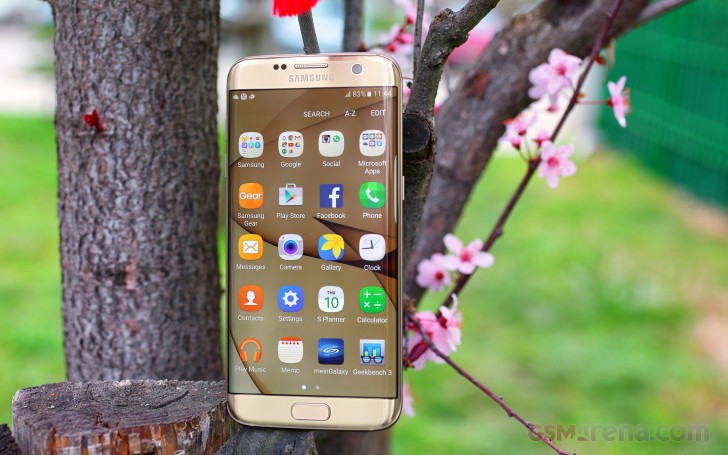 The fingerprint reader used on the S7 edge is the same as the one on the Galaxy S6 and Note5. It recognizes a finger in under a second. All it takes to unlock the phone is to press the Home key and leave your finger for a moment longer while the fingerprint reader does its thing.

The screen features a new Always-On function, which is said to draw 1% battery charge per hour. Besides the time and date, and missed notifications, the screen shows a subtle wallpaper to make things a little fancier. You can download additional always-on themes from the store.

The Night Clock is also part of the Always-on Display feature now - it can replace the big clock with the edged Night Clock at night. This way the screen will be less lit and more pleasant for the eyes in the dark.

Size aside, the homescreen is perfectly identical to the TouchWiz home of other Samsung phones. Even the number of columns is the same - 5 icons in a row, same as the S6.

Depending on where you are in the world, your leftmost homescreen would be either the Flipboard-powered Briefing or a new service called Upday (this is the one we got on our international unit). The two do pretty much the same thing  they aggregate news according to a pre-defined list of interests.

The Notification area is pretty busy by default. It starts with a scrollable line of quick toggles on top, then a brightness slider, then the Quick connect button. You can hide the latter from the Edit option, which also lets you re-arrange the quick toggles.

The Galaxy S7 edge user interface is fully themeable. We only got one theme pre-installed, but the Theme store has many more to download. By the way, there is an option to disable the app drawer, so you may want to give it a try.

Split-screen multitasking is supported on the S7 edge, and the 5.5" screen was born to do it. Even at half a screen, apps get plenty of room (Material design likes a lot of padding though). As always, only supported apps can work in split-screen, but Samsung's implementation is the most widely supported. Floating app windows are supported for some apps, too.

Some cool gestures are available for the Galaxy S7 edge - you can flip the phone for mute, swipe your palm for screenshot, double-tap the Home key for quick camera access, quick call, among others.

The Samsung Galaxy S7 edge comes free of bloatware, but has a few Microsoft apps pre-installed (MS Office, OneDrive with 100GB for 2-years, Skype). The phone starts with 32GB, but a quarter of that (7.5GB) is left to the system. You can get rid of the MS apps and some of the Google's apps (Drive, Photos, Hangouts), and you can free up additional 500MB.

Long story short - once we were done setting up our accounts, installed the necessary social apps, three games, and seven benchmarks (about 1.5GB of size), we were left with 20GB free space in total.

Samsung Game Launcher is a new app/service, which groups all of your games at one place. But that's just the beginning. The Game Launcher has a few powerful tricks, some of them a must have for avid games.

Next, the Game Launcher has its own DND mode - you can disable all alerts during a game.

Finally, there is the Game Tools key. It's a small floating virtual key you can position pretty much anywhere on the screen. Once tapped, it reveals additional actions such as No Alerts, Lock Recent and Back keys, Minimize Game, Take Screenshot, and Record.

Game Tools within a game

Locking the capacitive keys is crucial for a seamless game experience, as we found ourselves closing accidentally a game two times in just under five minutes!

The Record option is rather interesting. It captures a video of your game, but you can choose to either capture the in-game audio or record external sound using phone's microphone. The video recording also supports a watermark - you can set a static picture, or use the front camera to embed yourself in the video. YouTubers will find those very useful.

The Game Launcher also offers Top Charts and Featured Videos tabs, where you can see check some nice game stats, and find helpful videos about your games.