The Oreo update for the Samsung Galaxy S8 is currently in testing with a public beta released in the UK, US and South Korea last week. Now the company is already seeding the first update for the beta firmware squashing a bunch of bugs discovered by the testers.

The update also brings the October security patch and a couple of new features. The clock on the Always On Display got new styles, while the notification shade gained transparency settings. Some stability tweaks for the Launcher and the company’s DeX station are also part of the 610MB update. 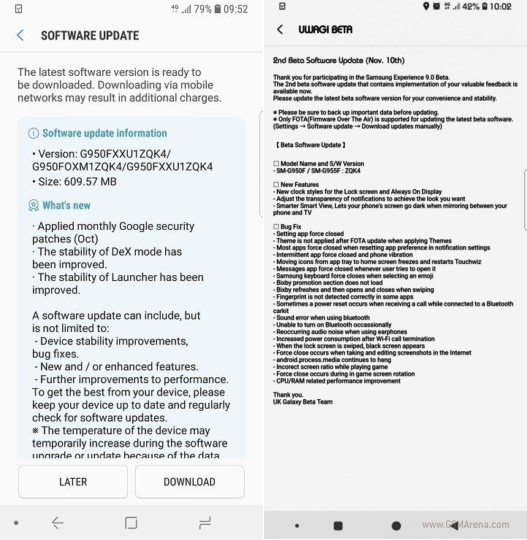 The beta test is yet to start in its second wave of countries - Germany, Spain, France, Poland, India and China, so we are still some way off from the official Oreo update hitting the Galaxy S8 and Galaxy S8+. Earlier a Samsung Turkey official said that’s likely to happen in early 2018 and it appears that might apply to all regions, not just his own.

Only try it if you don't mind losing Android Pay and things like games getting juddery, I tried it and it was too buggy for my liking and with the loss of Android Pay, I decided to roll back to 7.0. What I did find with 8.0 was better call quali...

Along a few more stuff. I got the update (sans oreo.) and the camera preformance has indeed increased. producing sharper images. MUCH wider autofocus range. (at last the honey eyes are not blurry when taking selfies. :D) the media player got a few tw...