The Galaxy Z Flip3 5G's key selling point lies in its looks and style; there's no two ways about it. Samsung itself repeatedly stresses it in promo materials, using wording like 'fashion statement' and 'turn heads'. The very existence of a total of 7 color variants, right at launch, means it's not reason (the specsheet) that will sell the Flip, but rather emotion. 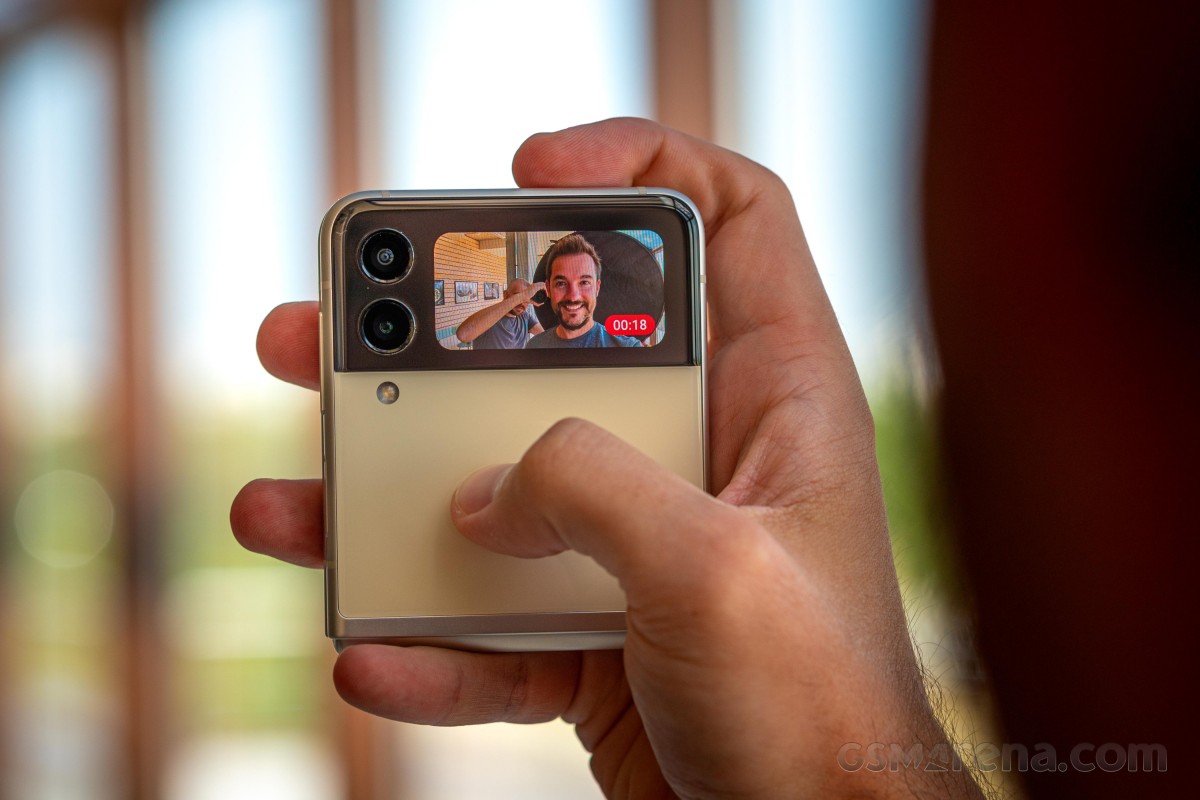 We have a small beef with the Cream review unit that we have here that all but interferes with Cupid's work. You see, Samsung portrays this particular colorway as having more of a champagne hue to the frame, to match the glass color like on all other color versions.

In real life, however, the frame is closer to silver in most situations making for a slightly distracting contrast against the rest of the phone. That's not very easy to show in pictures, however. If you're not seeing it, or you like it just as it is, all the better - it's just that this particular colorway would not be our favorite, let alone the hero color. 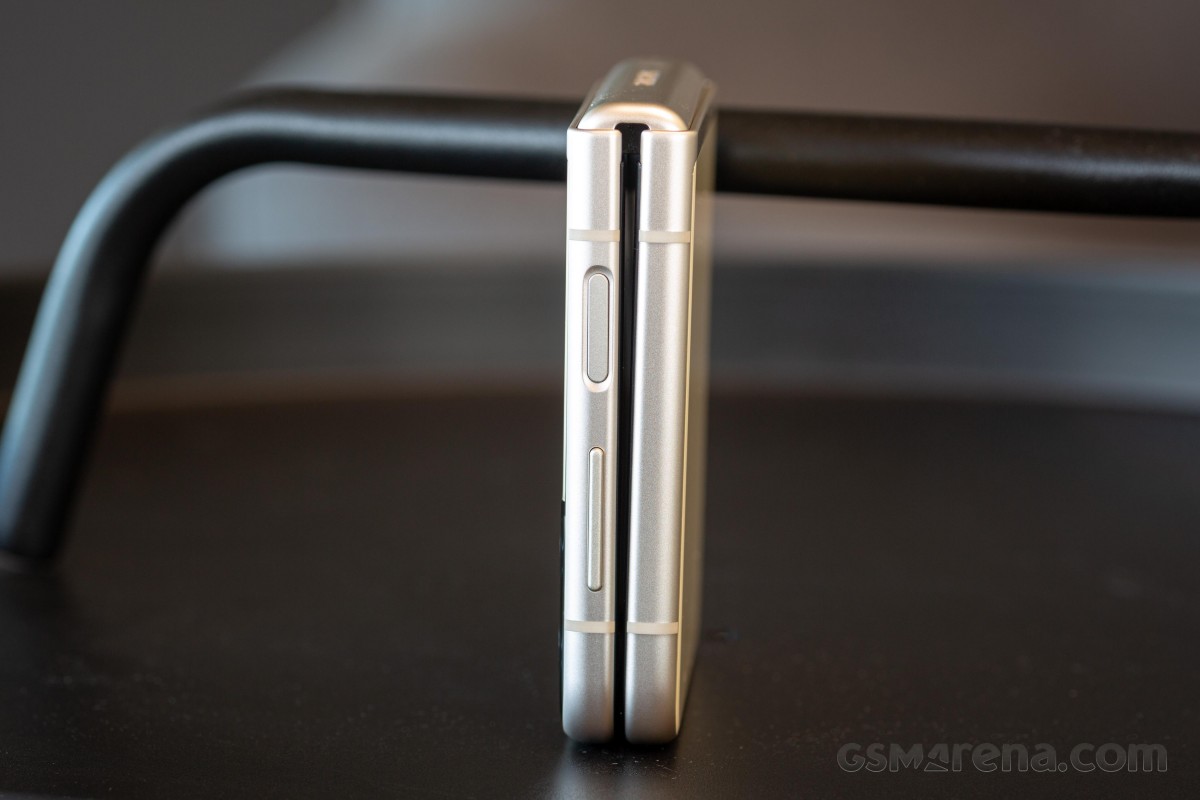 That's where the three other colorways come in handy. These are called Phantom Black, Green, and Lavender and in all three, the frame appears to be tinted closer to the glass panels' hue. 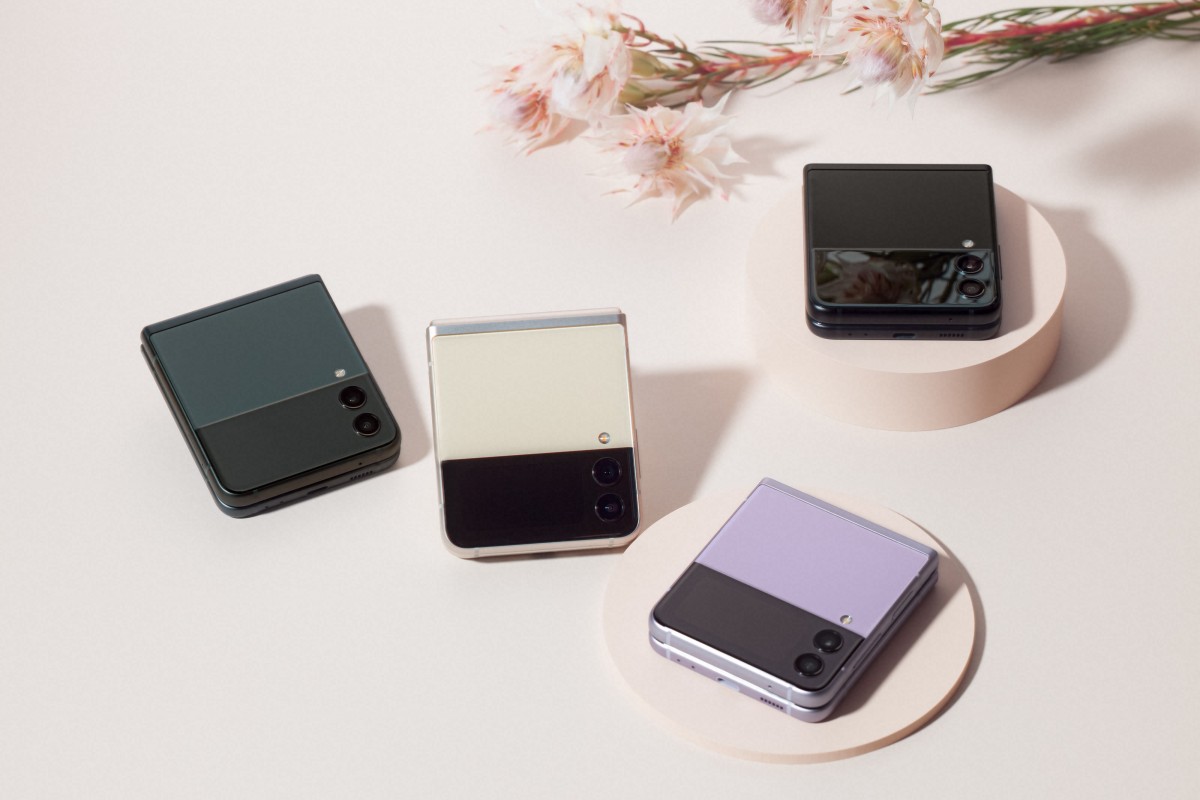 We spent some brief moments with the Green model, and that has an understated stylish look without being a nondescript Black. We approve.

Three more colorways will be available exclusively on Samsung.com - Gray, White and Pink. Those will have a contrasting black frame, on purpose. 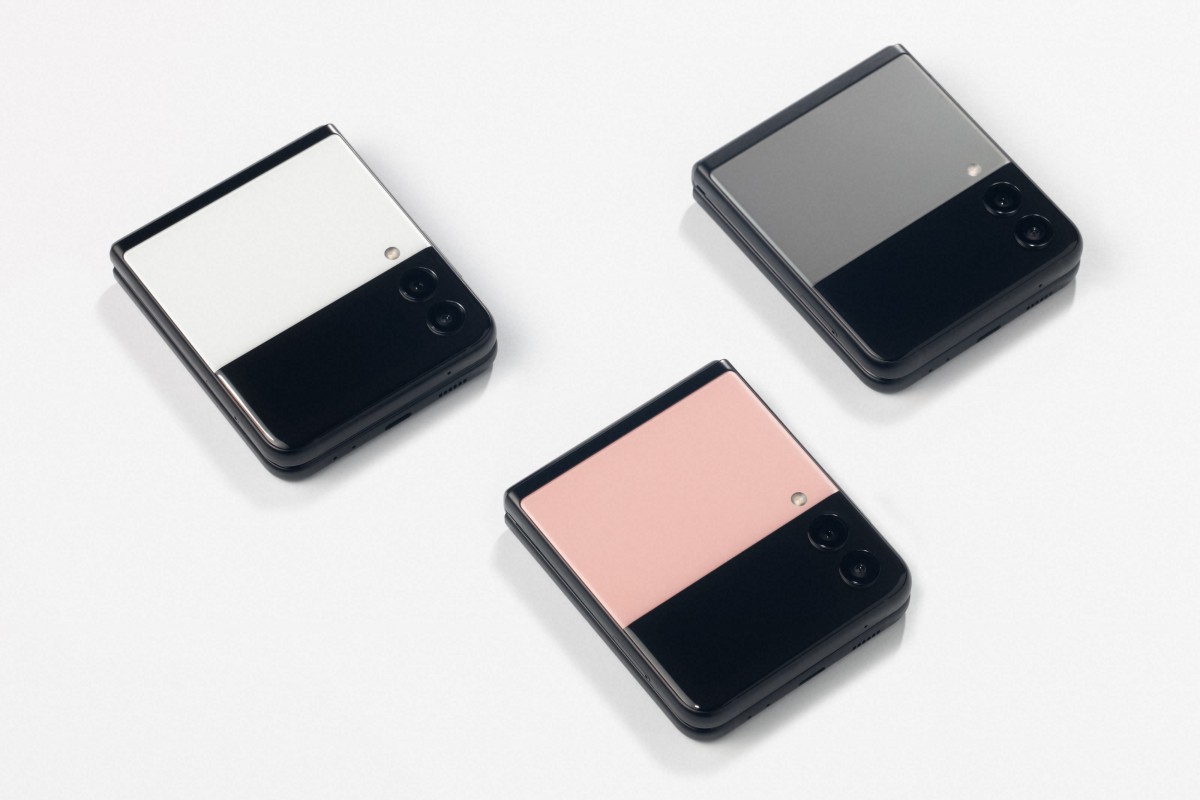 That's probably enough on color, for now, let's talk materials. The frame and the hinge backing are made out of what Samsung calls Armor Aluminum. The company says it's the strongest aluminum material used in a smartphone, though we didn't hear the implied word 'alloy' mentioned anywhere. 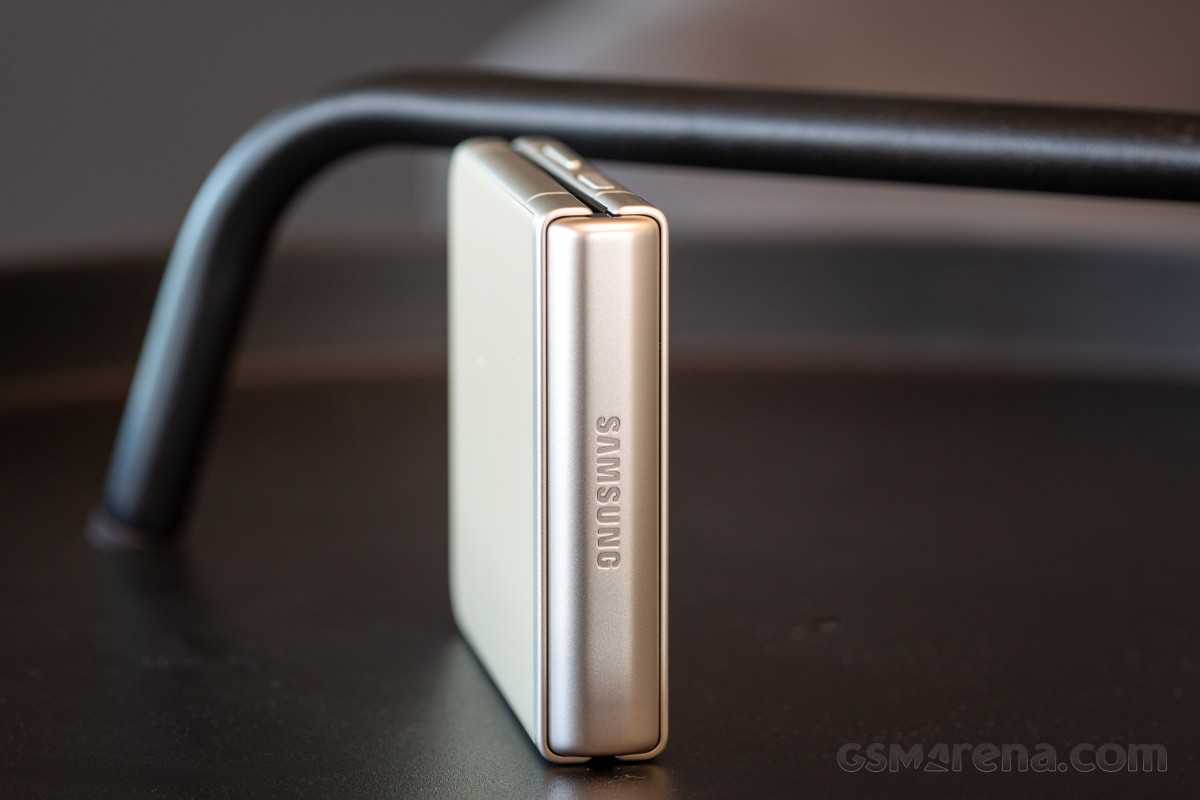 Speaking of durability, the Fold3 and Flip3 are the first foldable phones to carry an IP rating for water resistance. They are IPX8-rated, so you still better keep the Flip3 away from dust, though it should be safe for up to 30 minutes under 1.5m of water.

Essentially, the two halves housing the sensitive electronics are water-tight with sealed openings for the wiring. The hinge itself is exposed to water by design, but it's been lubricated and treated against corrosion. 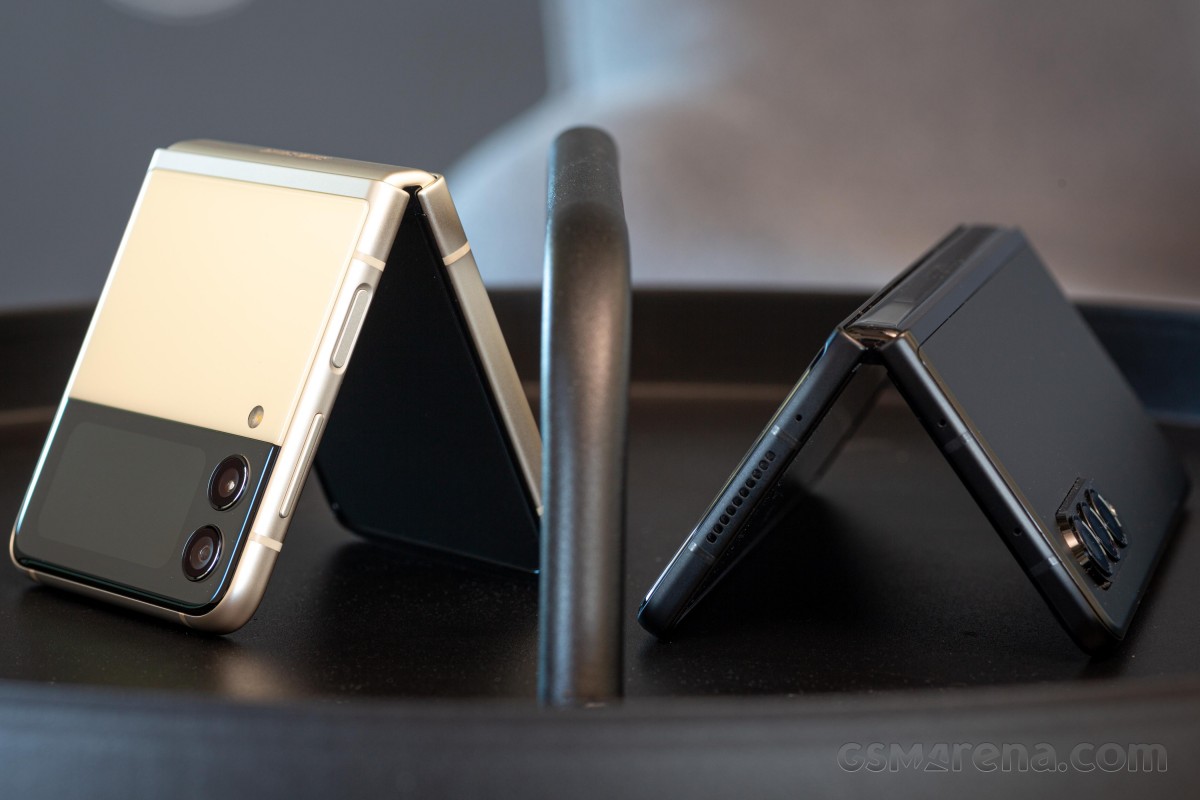 The outer glass panels are made out of Gorilla Glass Victus, Corning's latest and greatest. The new 1.9-inch cover display is placed in a black strip up top, together with the two cameras - the unfolded phone almost has a Panda Pixel 2 XL vibe. The flash couldn't fit in there, sadly. 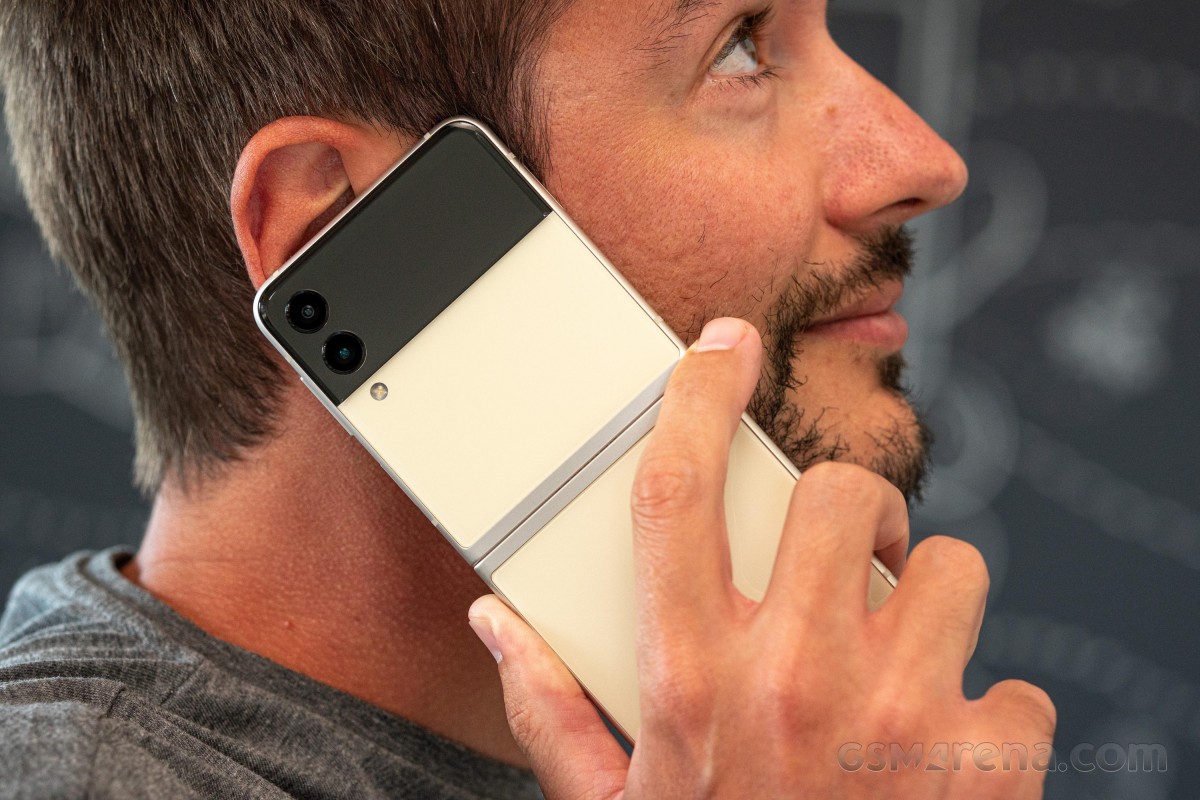 On the inside, the foldable display is covered by a new protective film, which Samsung says is 80% more durable than the one on the original Flip and has been rated to withstand up to 200,000 folds. A word of warning once again - do not remove that film. 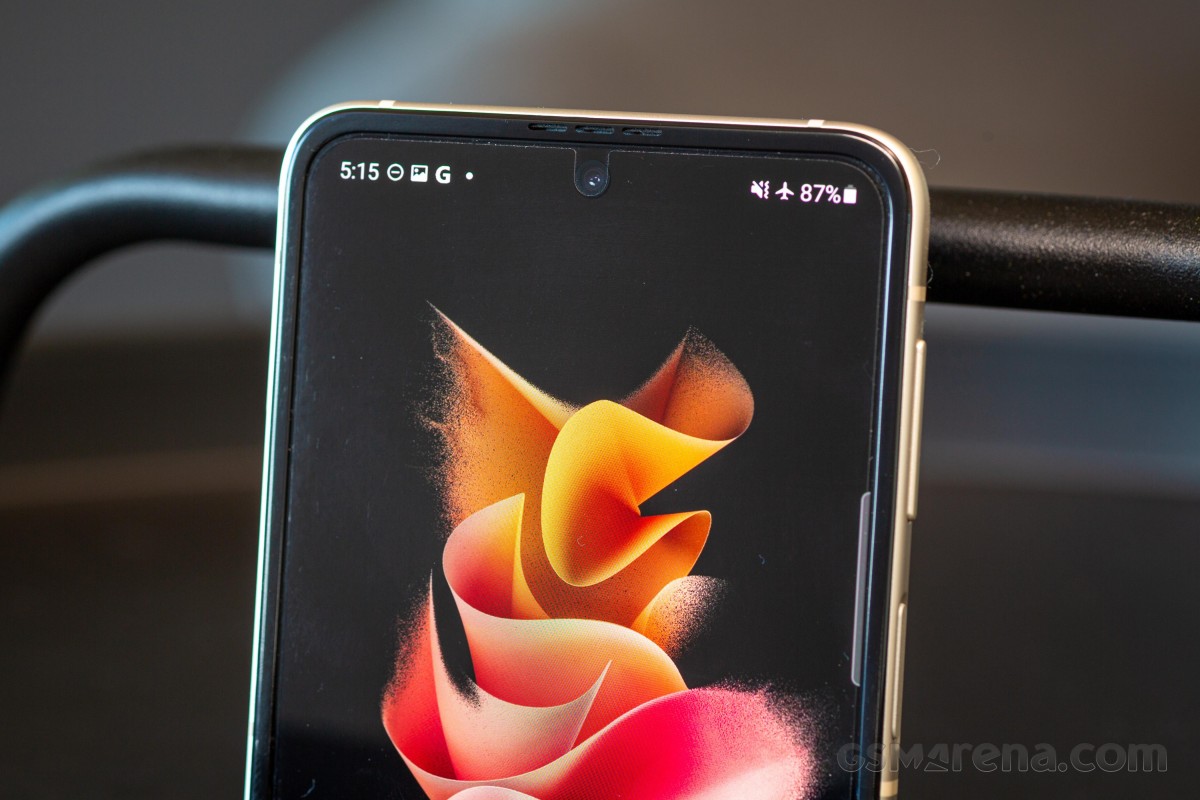 The 6.7-inch screen folds in the middle, and when unfolded, it still has a crease you can feel when you run your finger up and down. It's arguably more tangible than on the Fold simply because vertical swiping is how we scroll our lives away, and the crease runs across the display here as opposed to alongside the vertical axis.

You may or may not experience it depending on your particular scrolling habits - the phone is tall enough that maybe, just maybe, your scrolling action takes place only within the bottom half. And even if you do feel the crease, it's very likely that you'll simply start ignoring the sensation a couple of weeks into using the Flip3. 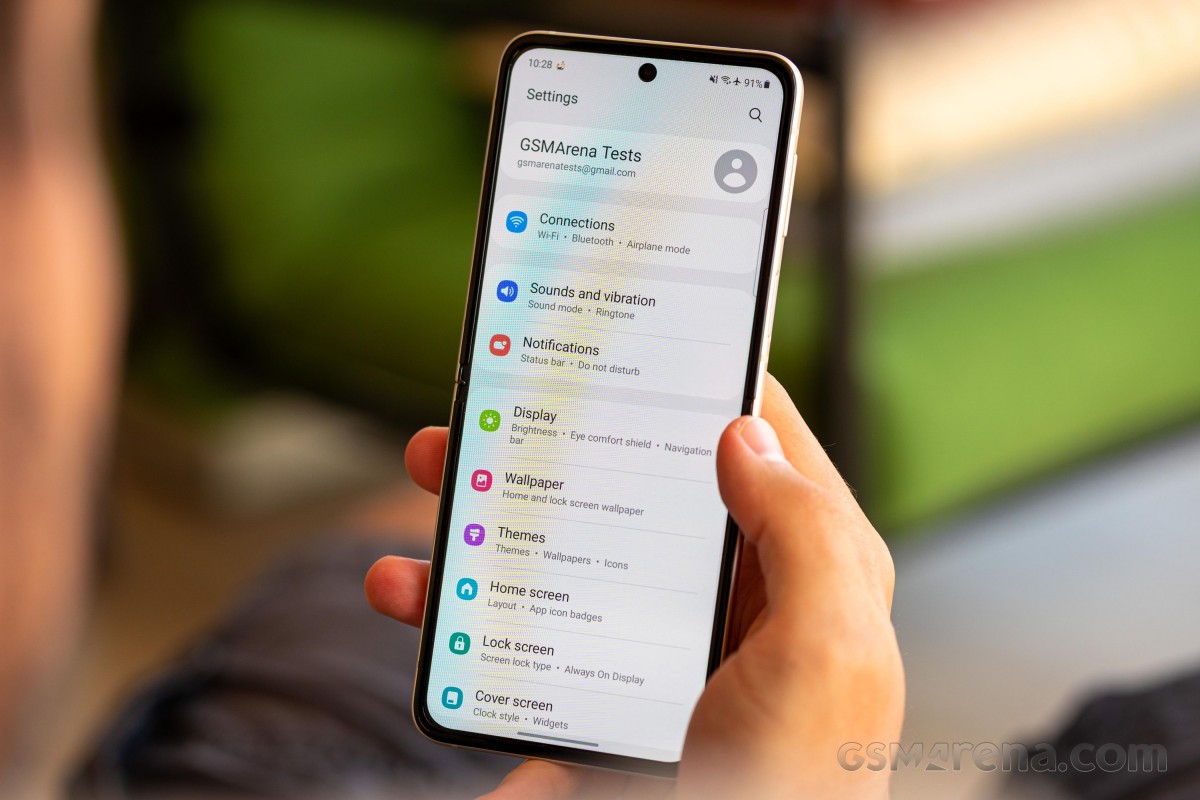 When unfolded, the Flip3 is one taller Galaxy S21 - the width of the two is all but identical. It's not a little taller - the Flip is, in fact, taller than even the S21+, so you can forget about reaching a lot further than the crease anyway. 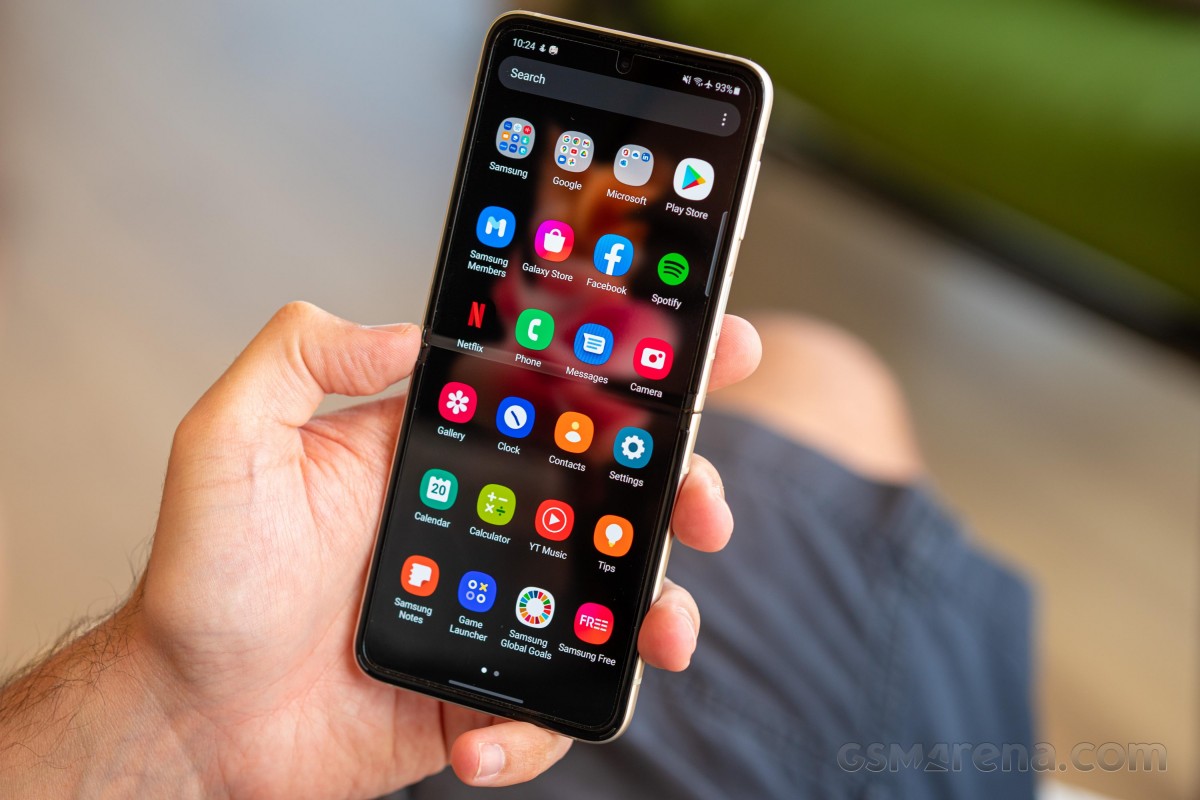 You could argue that the Flip3 is a two-hands smartphone, to begin with, despite the superficial notion that it's a compact device simply because it folds in half. Using both hands is the easiest and safest way to open the Flip, and certainly the one that will make you feel the least uneasy about damaging the internal display. 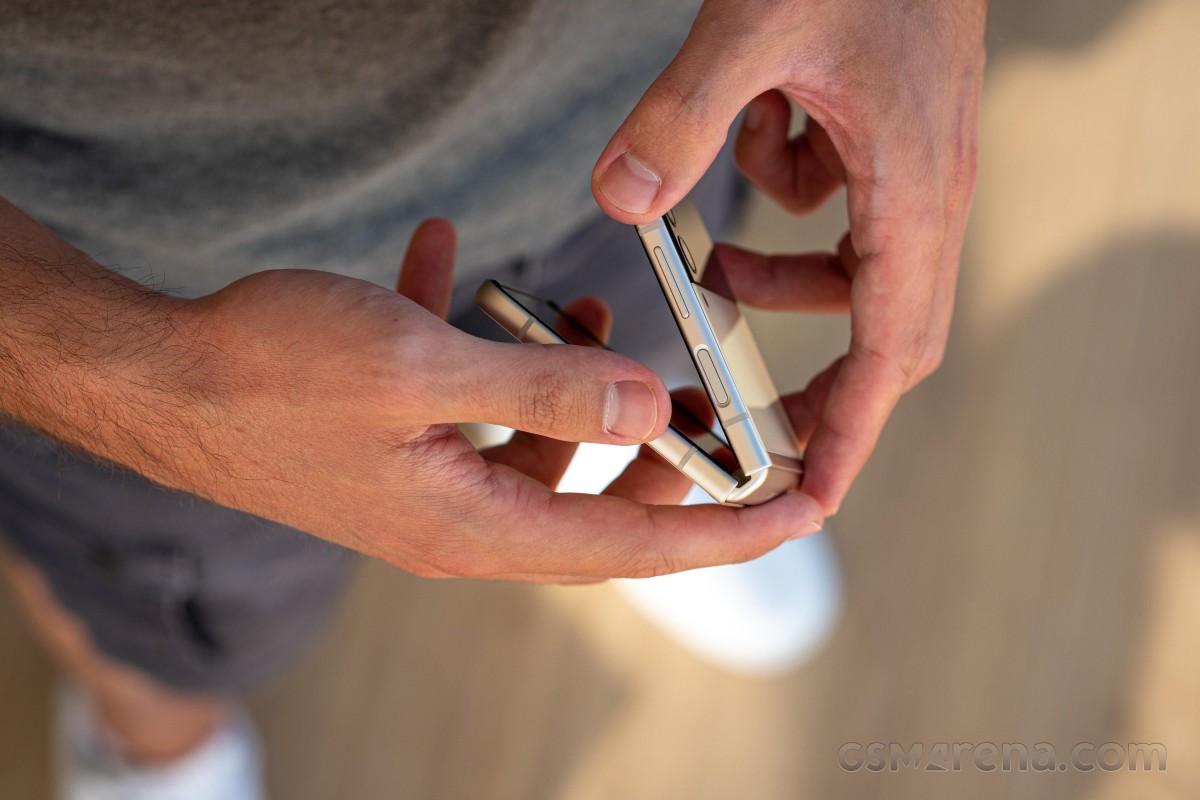 Opening it up with one hand is very much possible, but early attempts while you're still not sure you won't break it are anything but elegant. It's nothing like the Moto Razr (be it V3 or 5G) that pretty much snaps open - the Flip wants to be able to maintain almost any angle between its two halves, and that's incompatible with easy opening.

Now, if you do manage to get comfortable with the process, there's the fingerprint unlock to contend with. The fingerprint reader is placed in the top half of the handset, and at no moment of the unflipping process is it in a natural spot for either your right thumb or a left index finger. 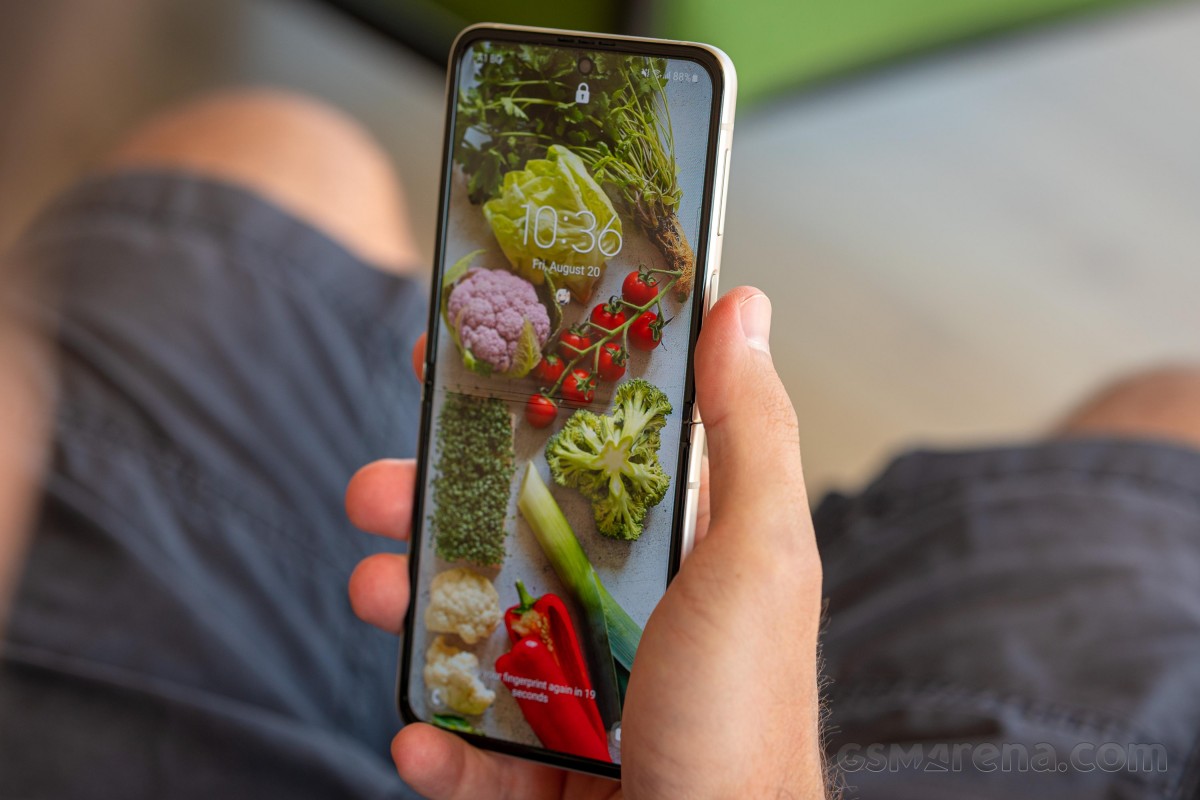 Any other phone you can pretty much pull out of your pocket, and by the time it's in front of your face, you can have it unlocked. On the Flip, that's conceptually a two-step process: Step one - you open it; Step 2 - you tap on the fingerprint reader to unlock.

If you use your Flip with your right hand, the sensor is generally easy to reach with your thumb, though we'd still think the placement is higher than ideal. Even so, when you pry open the phone with your thumb, the thumb is now on the screen, and the fingerprint reader is not, requiring another action. 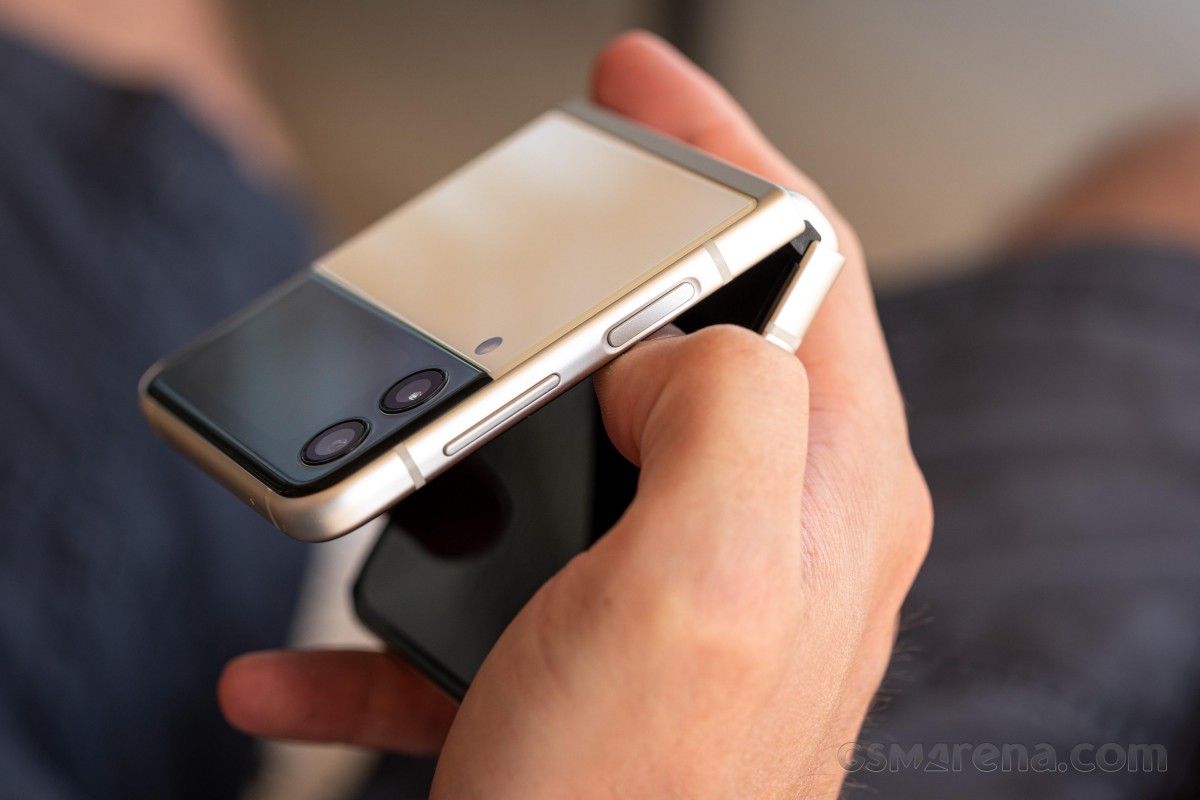 If you're a smartphone leftie, after the already somewhat unsettling process of unfolding the phone, you need to readjust your grip once again to get at the fingerprint reader with your left index finger, and that's an even less elegant maneuver. 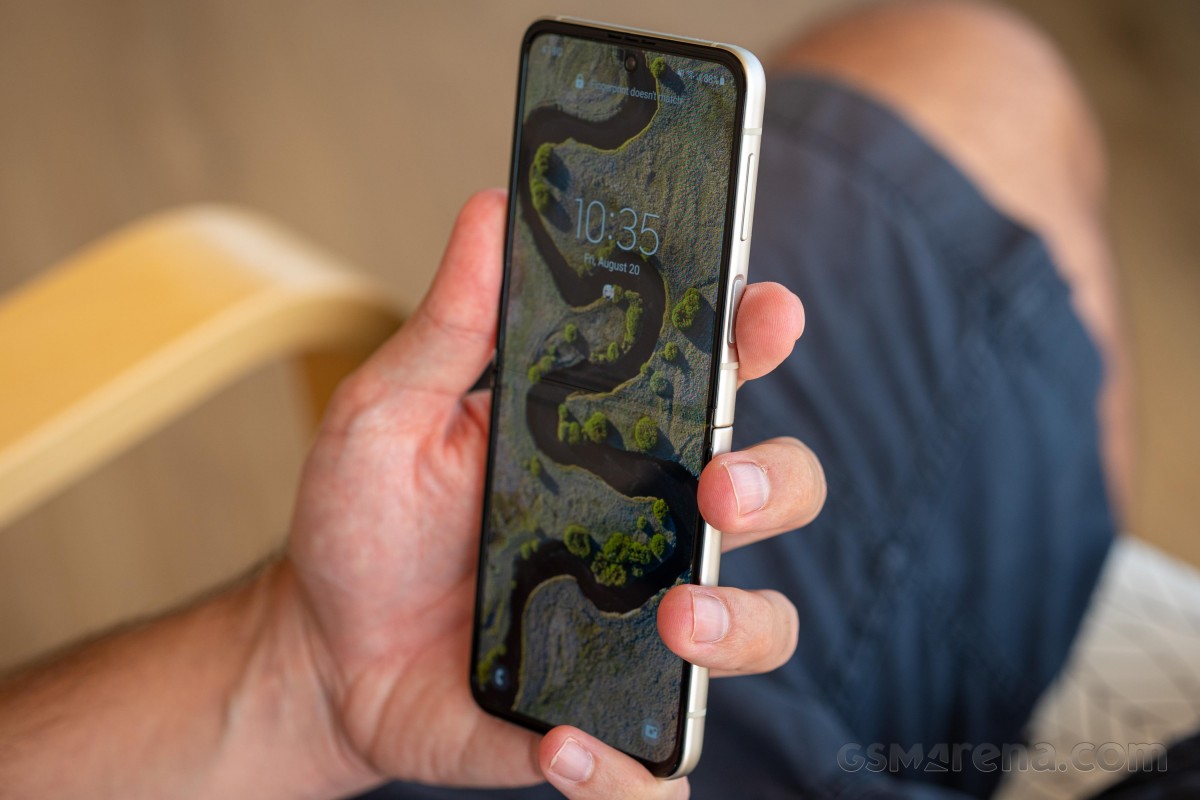 This phone literally sucks, battery life drains so fast its unbelievable, I wish I would have never gotten it. Used to be a huge Android/Samsung fan but no longer.

Awesome device, I had the first flip for almost 2 years so this one was a natural progressio. If you had fold or flip you know you can recommend it with ease- its not a phone for everyone thats a fact, also battery could be a bit bigger- on the plus ...