By this point, the Fold3's overall appearance should only be shocking to people who've really lived under a rock in the past few years - or are so enamored with, say, the Apple ecosystem, that they never even peek across the aisle to see what competitors are doing. We're sure such people do actually exist, but we're assuming most of you know what a Galaxy Fold looks like, at least in broad strokes.

That said, it would perhaps be a bit much to call this a classic design already, after all, it's only been a few years since the first Fold came out. Still, the Fold3 is definitely recognizable as a folding smartphone, with its chunky profile when closed, and it's also not easily mistakable for anything other than a Samsung foldable phone. The Korean company is probably aware of this too, which might explain why it refrained from stamping its logo anywhere on the back of the phone. 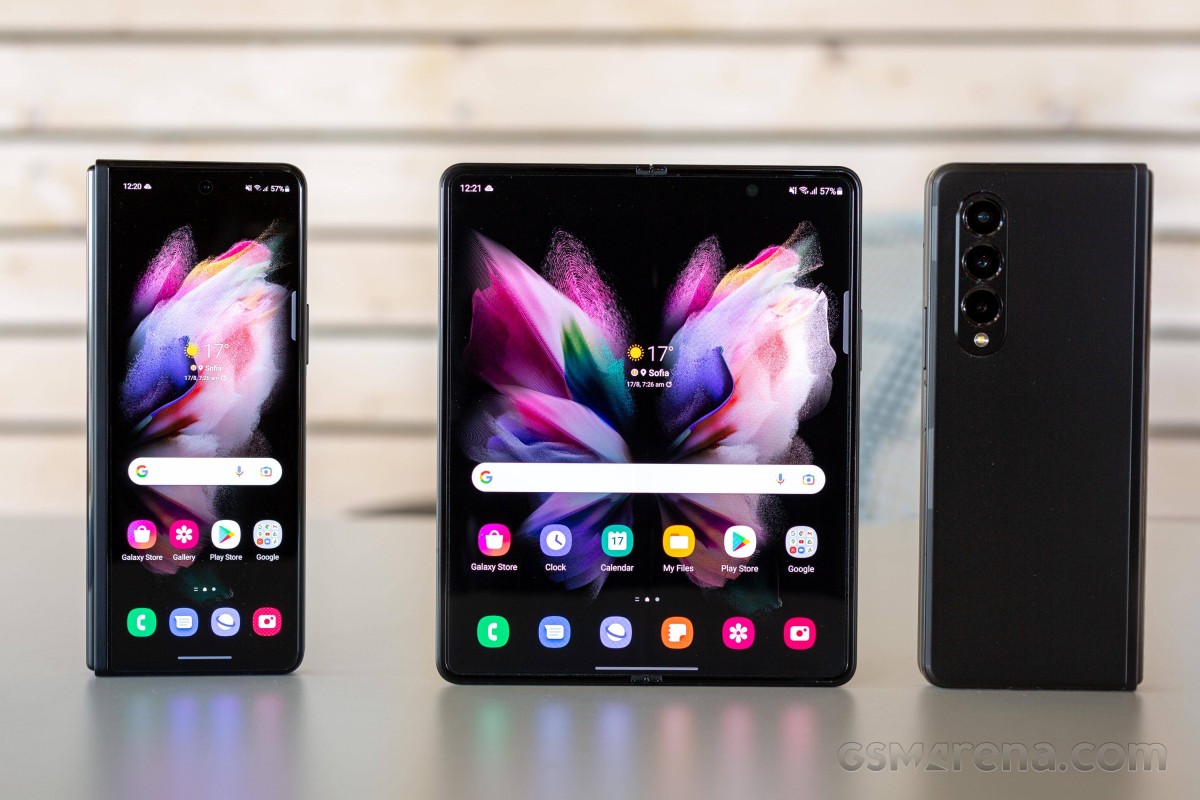 There's that one solitary Samsung wordmark on the hinge, and that's it. We love the minimalist looks this enables and have to praise Samsung for its courage - after all, when the phone is opened, it has zero visible logos. 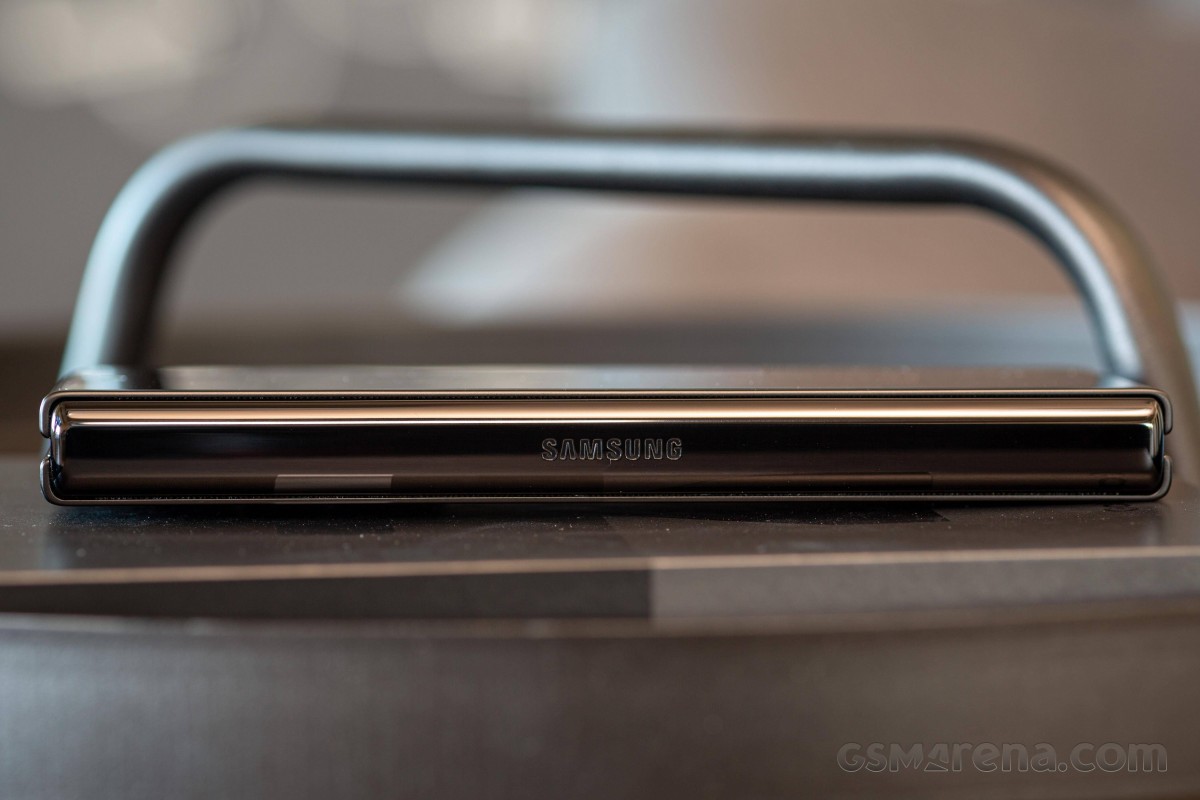 The back's satin-like finish is something we still haven't grown bored of; it's just a joy to touch every single time - and it's also among the most fingerprint-resistant glass coatings we've ever had the pleasure of using.

The frame is similarly fingerprint-proof, but the same can't be said for the outer part of the hinge itself, which is glossier for some reason, and as such, will enjoy collecting your fingerprints all over. You win some, you lose some.

The camera island on the rear fits perfectly with the above theme, with its three identical circles for the sensors, and circular LED flash underneath, and distinct lack of any pointless embellishments or text surrounding it. It works very well with the overall design, and it's one of the more understated camera islands we've seen. In our book, that's a good thing. However, by looking at its elongated shape, you may have already realized that it does, in fact, make the phone wobble on desks when it's closed, and you're trying to tap on the screen. 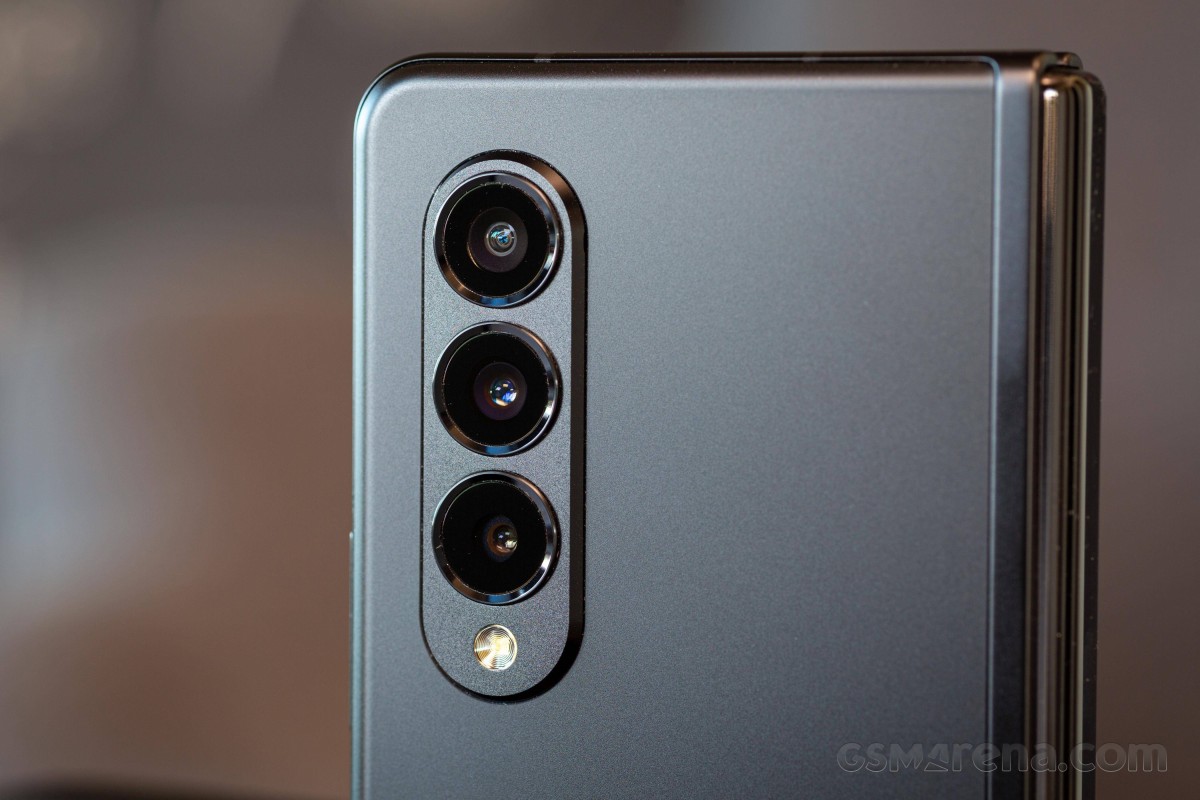 This is much less of a problem with the phone opened because then the wobbling only occurs when you tap one small area in the bottom right. Of course, if you use a case of any sort, the equation changes. Oh, and speaking of cases, there's no such thing provided by Samsung in the spartan box. You'll have to buy your own. We can't say we think it makes any sense for phones costing 10% of the Fold3's price to have bundled cases (and chargers, for that matter) and this top-of-the-line offering not to, but that's just the weird state of the mobile world right now. 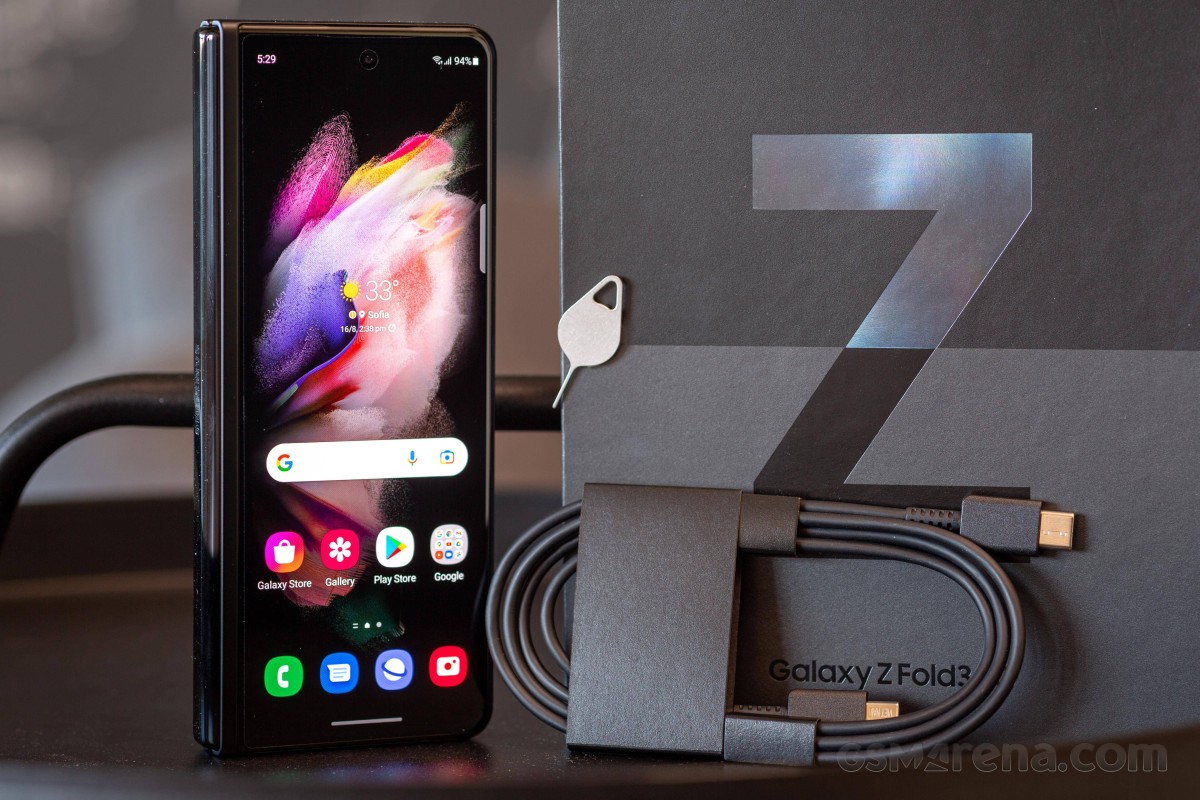 There's no getting around the Fold3's heft. It's chunky when closed, and it's heavier than any non-folding smartphone, but both of these inconveniences kind of come with the territory, as they say. It needs to be thick to accommodate both parts of the device, and it needs to be heavy for the same reason. The very tall aspect ratio of the outer screen means handling the Fold3 when closed is a breeze - you can get a secure grip even without a case on. This is, in fact, one of the best things about the device, but that aspect ratio also has downsides, which we'll address in the Display section of this review. 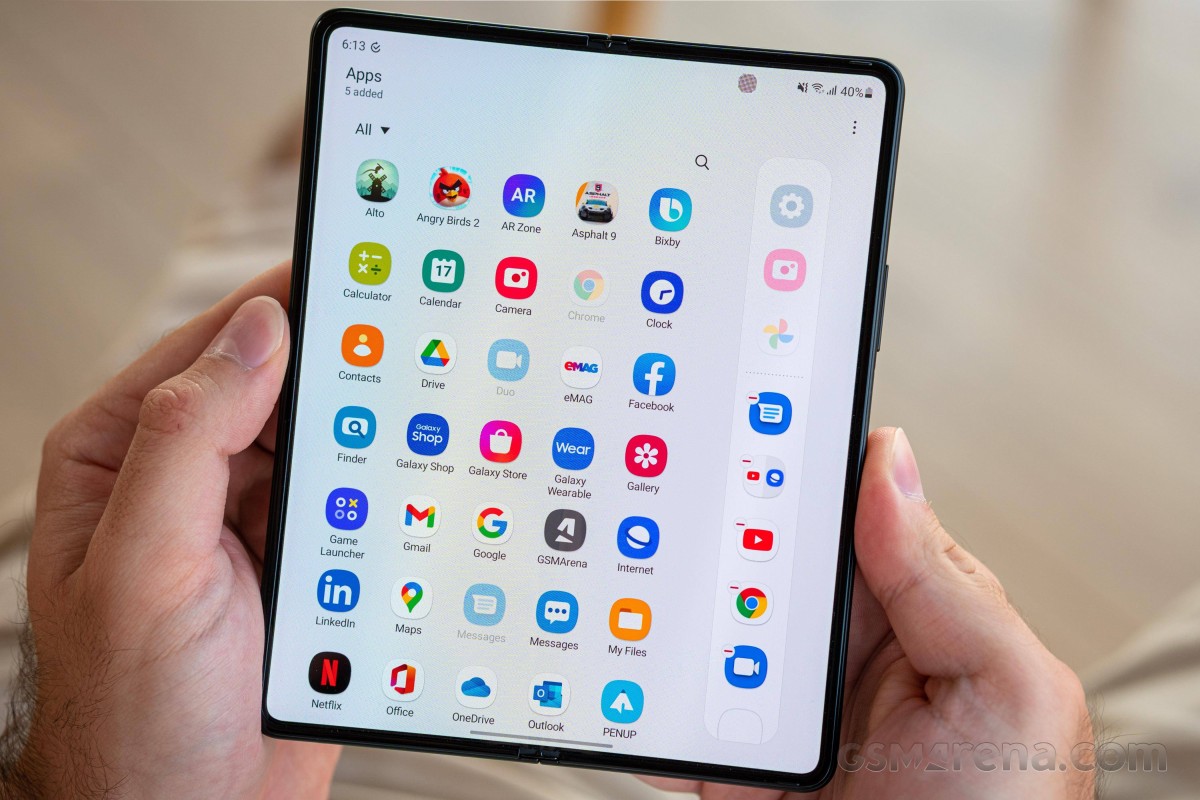 Overall, handling the Fold3 while closed is easy thanks to its narrow outer screen, although you inevitably feel the heft all over. When the device is opened, it really does feel like a small tablet, so the hefty feeling goes away. The internal screen is way bigger than the outer one, of course, but it's still not so big as to always warrant two-hand usage. If you're just scrolling, you can very easily get away with using the Fold3 one-handed even when it's open, and that's a plus in this reviewer's opinion because it just allows more flexibility.

Speaking of flexibility, let's address the hinge. First off, it does bring a lot of flexibility because it's not a black-or-white open-or-shut affair but can be 'paused' in any number of intermediate places. That's much appreciated, as it allows for some laptop-like use-cases, as well as serving as a makeshift stand of sorts - you can watch videos on the outer screen while it's propped up by the hinge. This wasn't the case for the Oppo Find N, and we sorely missed it indeed.

The weird aspect ratio of the outer screen does, however, mean that, depending on what you're watching, you may have to pick between huge black bars or cropping so far into the video that you can barely tell what's going on. Even so, we like that this feature is in here and that the hinge can do all this. 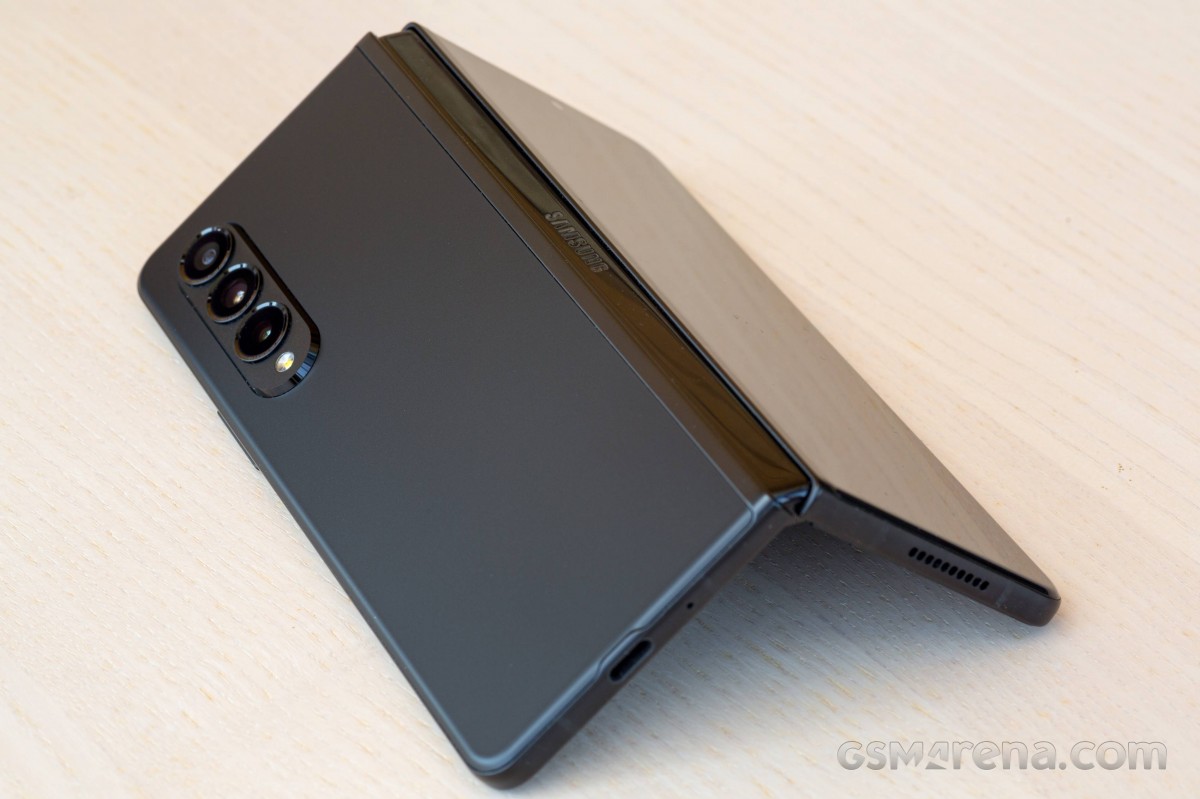 What we don't like is that, when the phone is closed, the hinge is as far from 'zero-gap' as they come. We're going to cut Samsung some slack for this generation of the Fold, though, as 'zero-gap' hinges started appearing in Chinese competitors after the Fold3 was already released. That said, the Fold4 simply has to have one in order to keep up with the times.

Anyway, the hinge feels sturdy, much more so than the Flip3's - but then that may all be down to size. Similarly, when the phone is fully opened, it feels much more like a unitary device and not two separate parts like the Flip3 does. Again, we're assuming the ratio of the size of the hinge to the size of the phone has something to do with this. And yet, the Oppo Find N actually feels 100% like a non-folding device when opened, and the Fold3 is not quite there. These are minute details, mind you, and ones that you aren't likely to notice unless you've played extensively with more foldables than just this one. 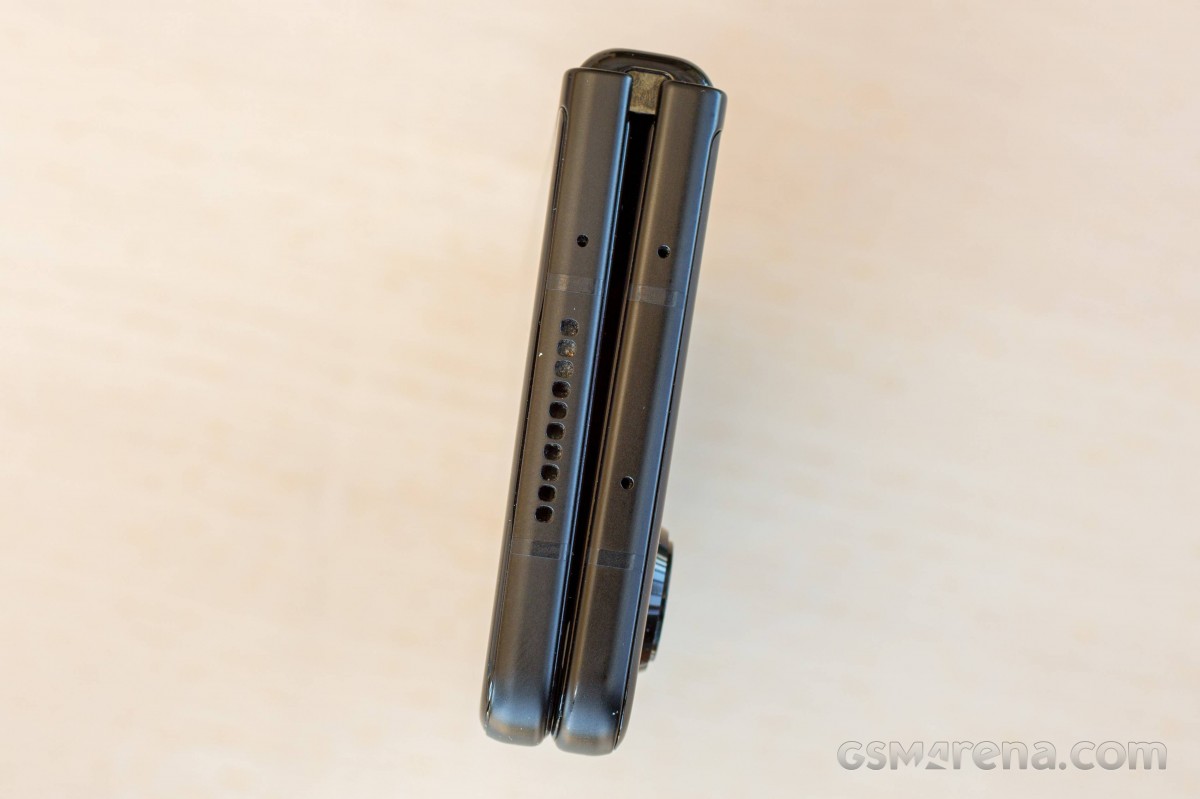 The metal frame is rather slippery (if not nearly comparable to the worst offenders even among foldables - looking at you, Find N), which means opening up the phone is never 100% a breeze. It's actually easier to open it up than the Flip3 for whatever reason, and much easier than the Find N, so of our current sampling of long-term reviewed foldables, it fares the best, even though there's definitely still room for improvement there.

Since this is a foldable device and is thus a bit more fragile than normal phones, you may want to be attentive when you try to unfold it, because there is always a non-zero chance it could slip from your hands while you're doing that.

The Galaxy Z Fold3 has two speakers, one on the top and one on the bottom, and they're probably among the best speakers ever put in a phone overall. They will neatly complement your media enjoyment on the Fold3. They sound great, although they're not the best for bass. Then again, since this is a phone and they have to work within such size constraints, even if they were a tiny bit better in that department, bass heads would definitely still need an external speaker or headphones, in all honesty. But these are perfectly passable for anything involving voice and musical genres that don't rely a whole lot on the low-end. 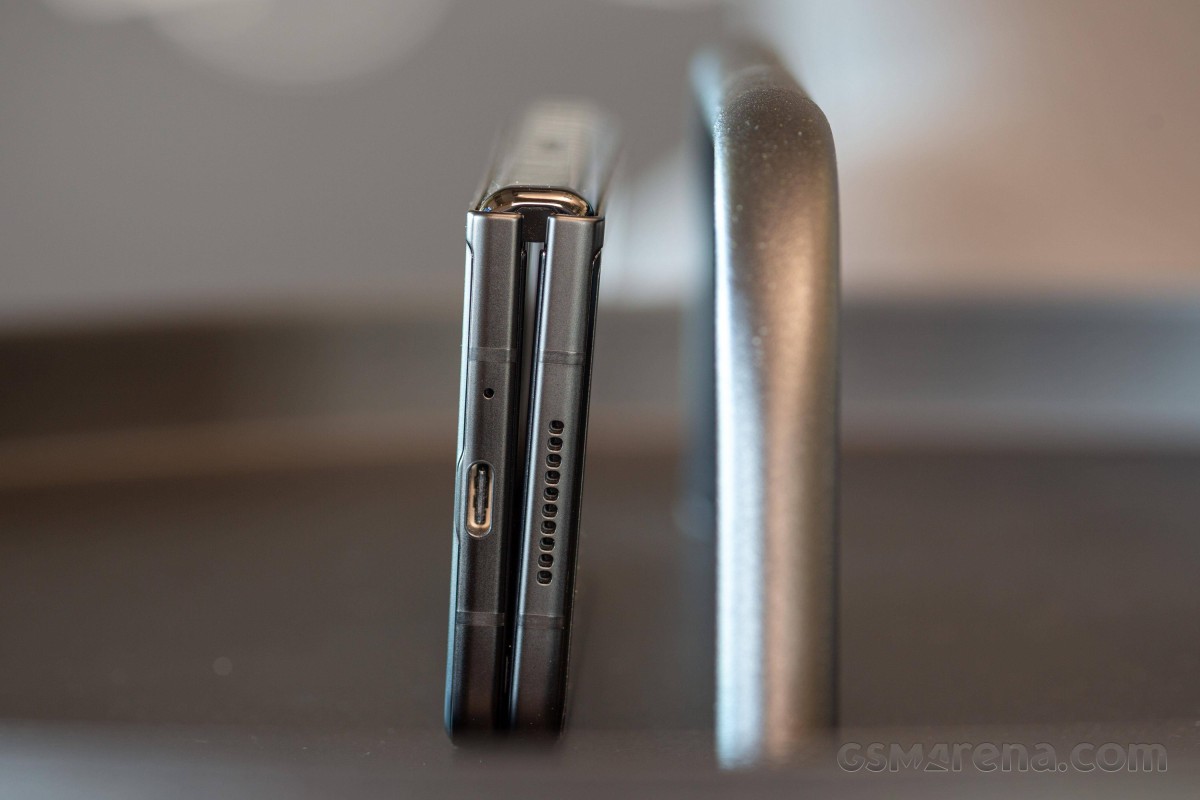 The speakers also get plenty loud; they are, in fact, among the loudest we've ever heard on a phone that was reviewed long-term. This means that, while indoors, we never felt the need to bring the phone closer to our ears to hear what was going on - the top volume was always sufficient.

The situation understandably changes completely the moment you step outside, but that's just physics for you - there's only so much tiny speakers can do to cover the world around you with their sound. But for tiny phone speakers, these are definitely impressive.

The vibration motor is a similar story. While probably not the best we've ever encountered, it's very, very close. It has a lot of oomph and is one of those which you can feel but also hear - especially if the phone is resting on a hard surface. Now some people don't like this, but we absolutely love it.

There's a lot of 'depth' to the vibrations too, and of course, you can play with various patterns for various scenarios to adjust everything to your liking - this is a Samsung after all, and Samsungs are nothing if not customizable. We still wish the UI would use gentle 'nudge'-like vibrations more often, like MIUI does, but that's a minor point and doesn't actually have anything to do with the vibration motor itself. That part is definitely top notch in this phone.

The fingerprint sensor is side-mounted, and it ties the Galaxy Z Flip3's for the most accurate side-mounted one we've ever used. And yet - for some reason, this one is slower. It's not so slow as to become annoying, but it's edging dangerously close to that. Still, when it comes to accuracy, you won't be disappointed. We're happy to see side-mounted sensors finally catch up, accuracy-wise, to their rounded counterparts, which used to be mounted on phone's backs (or in their Home buttons - remember those?).

It's been a long time in the making, this, but now we can finally say that just because they're thinner and have less finger surface area to scan doesn't mean they can't be equally as good. Hopefully, Samsung can do something about the speed of this sensor, if not through software updates for the Fold3, then through may be using a different hardware part in the upcoming Fold4. Again, don't get us wrong - it's not frustrating to use, but it's almost there. Cutting it real close. 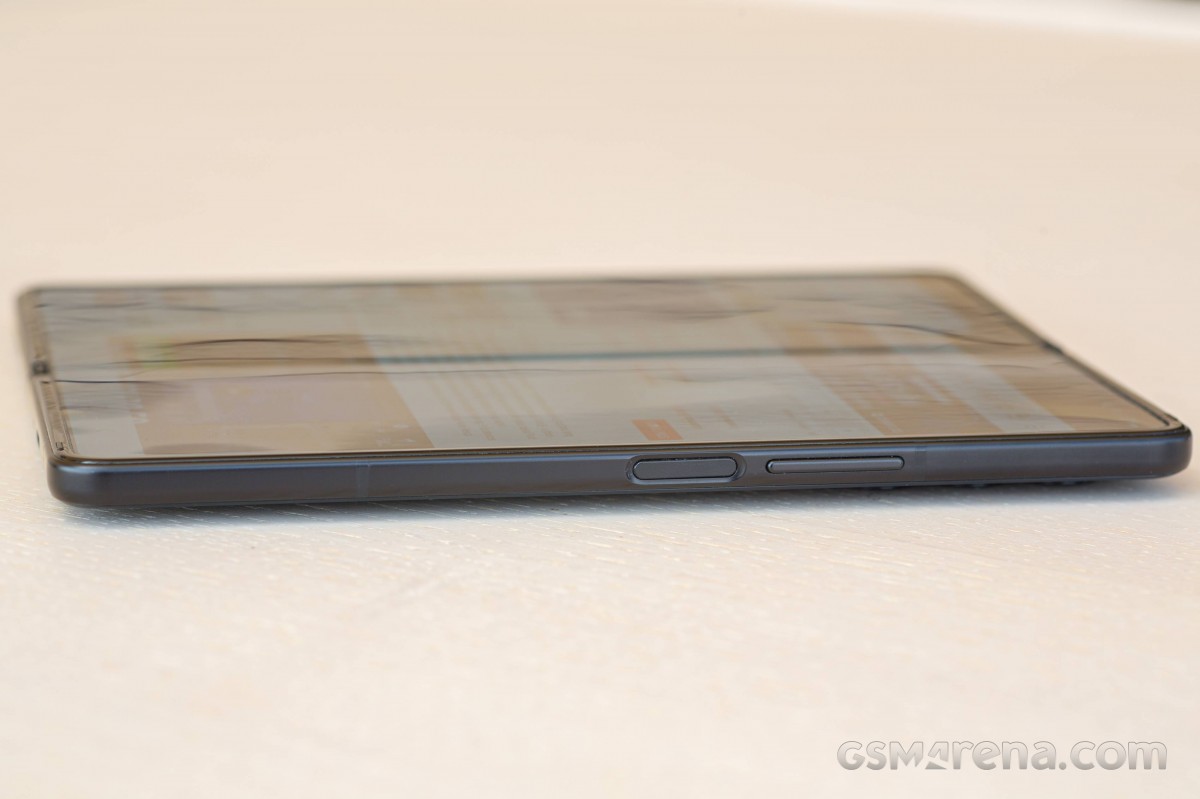 Of course, you also get face unlocking, but as usual in the Android world, it's using the front-facing cameras only, so it's way less secure than the fingerprint sensor.

The Fold3's fingerprint sensor is also in the appropriate position, the one that will fit most righties for their thumb and most lefties for the index finger. That's a welcome improvement compared to the Flip3, which has the sensor too high up on the right side of the frame, owing to the position of its hinge. There's no such issue here, in fact, we might even go so far as to say the Fold3's fingerprint sensor could actually be a tad too low for people with big hands. For most, it should be fine, however, and the volume rocker is above it on the same part of the frame - see, Oppo, it can be done!

Like on the Flip3, you can swipe from top to bottom over the scanner to bring down the notification area, and like on the Flip3 we tried this and then chose not to leave it on because we ended up triggering it a lot by accident when just holding the phone. If the response to this gesture would be a little less sensitive, then we'd definitely keep it on, as it is a great aid for one-handed use of the Fold3.

That should the essence and hallmark of a vertical fold phone ie to be used as a nice handy Tab and take over the functions of a Tab in unfolded form. More sliming needs to be done , more Ram and editing softwares of a Tab requirements would definite...

Like the phone except for the fact the motherboard died in less than 6 months of use. Overheated and froze and all Samsung service could do is leave me without a phone for over a week while they fixed it. A replacement would have been the decent thin...