We’ve been hearing about the Galaxy A70s for several months now. The latest news about the phone reveals more about the device in the form of the Chinese TENAA listing of the phone in question. In addition, the phone has been partly listed on Samsung’s India support website.

As revealed in the TENAA listing, the Galaxy A70s is going to come with a 4,400 mAh battery and features a large 6.7-inch display. It was previously reported that the device would come with a larger 5,000 mAh battery, but this is no longer the case. 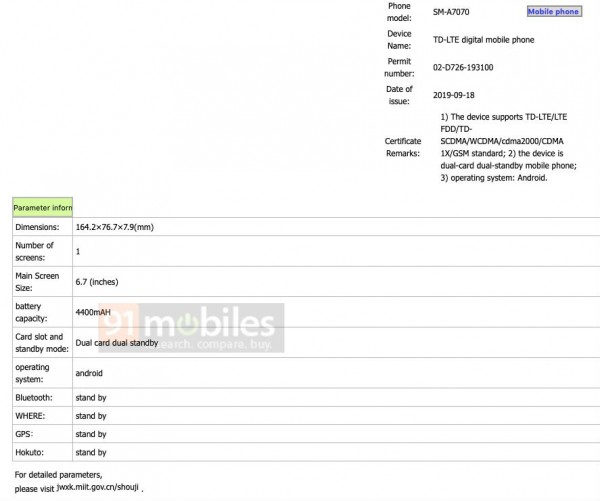 Despite the identical dimensions and similar battery to the Galaxy A70, the Galaxy A70s is expected to be the first device to come equipped with a 64MP ISOCELL BRIGHT GM1 sensor. This would seem to be the only real difference over the A70. The phone will still ship with the same Snapdragon 675 CPU as the Galaxy A70.

The Galaxy A70s could launch as soon as the end of this month, perhaps going into the beginning of October. The rumored price for the Indian market is INR 32,990.

to be honest reducing battery life is a dead breaker for me comparting 4500 mah A70 , camera doesnt since it isnt gonna be good anyway.... if a70s provided wireless charging and samsung dex.... would have be worth it .. and samsung should upgrade the...