Qualcomm’s budget-friendly 4-series chipset line just got its first 5G SoC with the freshly announced Snapdragon 480. It’s bound to power more affordable 5G phones in the coming year. The chipset is built on the 8nm process and comes with an integrated Snapdragon X51 5G Modem-RF system with support for both mmWave and Sub-6 GHz networks. On the CPU side, we have the Kryo 460 performance cores based on the Cortex-A76 clocked at 2.0GHz alongside more power-efficient A55 cores working at 1.8GHz. The GPU is an Adreno 619. Qualcomm is boasting a two-fold increase in both CPU and GPU performance compared to the Snapdragon 460 chipset. AI tasks will be 70% faster thanks to the Qualcomm Hexagon 686 chipset. 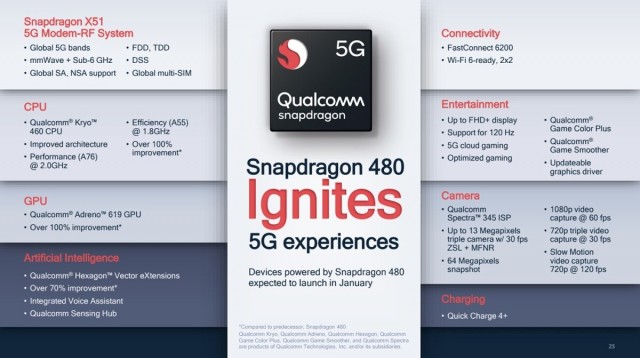 The Snapdragon 480 is expected to debut on budget 5G phones from a range of makers including vivo, Oppo, Xiaomi, Motorola, and Nokia sometime in Q1 2021.