Sony Mobile is investigating its operations in Africa, Turkey and the Middle East

It's no secret that Sony's Mobile division has been going through a rough patch, for quite some time now. After the fairly recent internal CEO shuffle, it seems that active steps have finally been taken to evaluate the state of the mobile branch, in hopes of bringing it up to speed with the Japanese giant's successful imaging and gaming divisions.

Word of an ongoing internal investigation into the Middle East, Turkey, and Africa markets first came about through veteran leakster Evan Blass a few days ago.

Bad news for Sony Mobile fans in the Middle East, Turkey, and Africa: I'm hearing that the company will "shut down its operations and offices" in the region by October.

However, we didn't really take it too seriously, since it ended with a rather grim prediction of entirely shutting down operations and offices in said countries by October. In a new development, a Sony representative has, indeed, confirmed that the company is investigating exactly those three markets:

As part of our ongoing measures to drive profitable growth, we are carefully monitoring the market situation and reviewing our business feasibility in Middle East, Africa and Turkey,

To be fair, the statement is very carefully worded and intentionally vague, so we can't exactly make any solid conclusion. Still, a recent Counterpoint report does quote rapidly increasing annual share growth for various Chinese manufacturers in Africa and the Middle East. 36% annual growth in Q1 2018, compared to 15% in Q1 2017, to be exact.

That puts quite a bit of extra pressure on competitors. Plus, Sony themselves have recently gone on record, blaming Xperia sales on slow product lineup improvements. Putting two and two together, we definitely see how a strategic down-size could help the massive Sony Mobile business become more nimble, agile and adaptive. 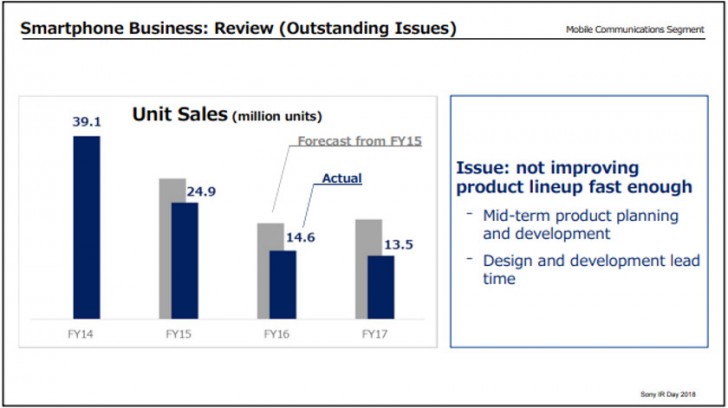 Hopefully, this will all work out for the best in the end. What’s your personal take on the future of Sony? Tell us in the comment section.

Shuffle at the top - Sony CEO Kaz Hirai steps down

Ok if they want to shut down their mobile segment that's ok but i can't imagine living in a world without a SONY store. I'd be depressed.

Agreed with everything you said.

I have been a long time SONY user since 2006 where SonyEricsson was the brand before these 2 companies split apart. Since that date, SONY is my favorite brand because of build quality & durability compared to Samsung & Nokia, these last 2 f...