When it comes to the Compact family, Sony has quite a reputation to live up to. The Z3 Compact is arguably one of the company's most-successful models. 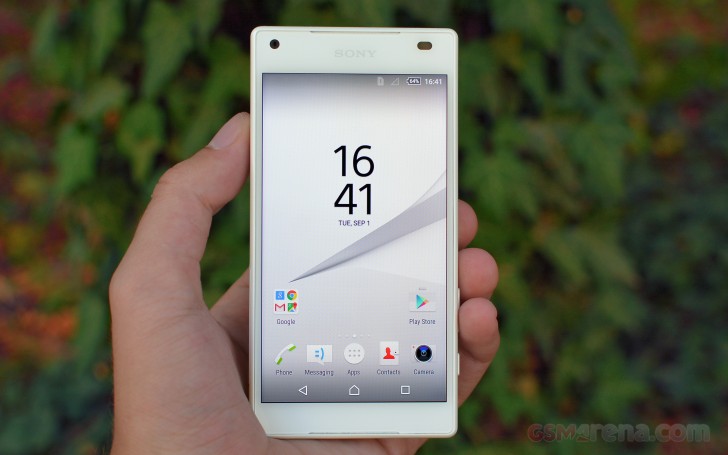 Amidst an industry increasingly pushing toward more and more screen real estate, sometimes to absurd levels, as much as 6.0-inches in a handheld device, there is an ever-growing niche for high-end devices on the sub 5.0-inch scale. The Z5 Compact embodies that same concept - flagship-grade specs in a compact body with a 4.6-inch display.

With the kind of horsepower the Z5 Compact has, it can definitely handle anything you throw its way. The high-end Qualcomm 810 chipset also comes with a powerful Adreno 430 GPU, just like the one in the Z5. Coupled with an HD resolution should equal some impressive pixel-pushing performance. Gaming should be a fluent experience all around, given you don't mind some eye-strain on the 4.6 inch display.

Beside the new chipset, there is also the new 23MP camera on the back and 5.1MP one on the front, both borrowed from the Z5. Also, the fingerprint reader, conveniently embedded inside the power button, which is arguable one of the most convenient approaches to date. Throw in a slightly bigger battery, some slight hardware upgrades such as Bluetooth 4.1, faster Cat.6 LTE and software improvements and you get about pretty much all improvements the Z5 Compact has to offer over its predecessor.

We can't help but feel that phone could have delivered bigger upgrades than that. The resolution is still the same at 720p, so is the amount of RAM at 2GB, combine that with the inevitable price difference and you are in a situation where the already popular Z3 Compact could remain a better deal for a lot of users.

On the other hand, the price difference between the pair is significant at around €150, making life a bit hard for the Z5 Compact, especially if it aspires to be as successful as its predecessor.

But let's not get ahead of ourselves. The most important thing is that the Z5 Compact looks and feels like a genuinely new product and not just some slightly updated version of its precursor. That's alone is enough to warrant a full length review. So jump on.

Bought it in 2016 on sale for 200€ and still works. It got slower but still perfectly useable besides demanding games and it has all practical features of new phones. I consider this phone to be one of mine best buys of all time. And considering...

What is that third-party app you used? The results are indeed much better than what you get out of the stock Sony app.