TrackID has been a staple of Sony phones – well, Sony Ericsson at the time – since 2005 but it will not carry on into 2018. In a surprise move, the company has decided to shut down the music recognition service on September 15.

With the app, your TrackID history will be lost too. And it sounds like the Backup option will not save it – Sony offers no solution to transfer the list of recognized tracks you’ve accumulated to another app. 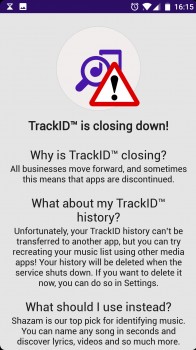 So, what now? Sony recommends Shazam, it even put a download link in the message. Shazam works with the Google voice commands, which is cool, but there are other music recognition services out there as well. Whichever one you pick, better download it soon.

Sony has been killing off a lot of its signature apps – Live on YouTube got cut late last year, PlayMemories Online was axed from the Xperia Album app around the same time too and now TrackID is saying its goodbyes.

Snapchat introduces Groups for up to 16 people, builds Shazam music recognition into its apps

Shazam for iOS updated with even better Apple Music integration

Samsung Galaxy S8/S8+ get exclusive Play Music feature, but you can too

So u want to say that from all their phones, having ONE issue on ONE model means it should shut down? Then why didnt Samsung shut down his note series? That was way worse than this, in fact it was dangerous. This is just a minor issue so stop being s...

Of all the Samsung phones I see people use, they all appear to slow down after a few months.