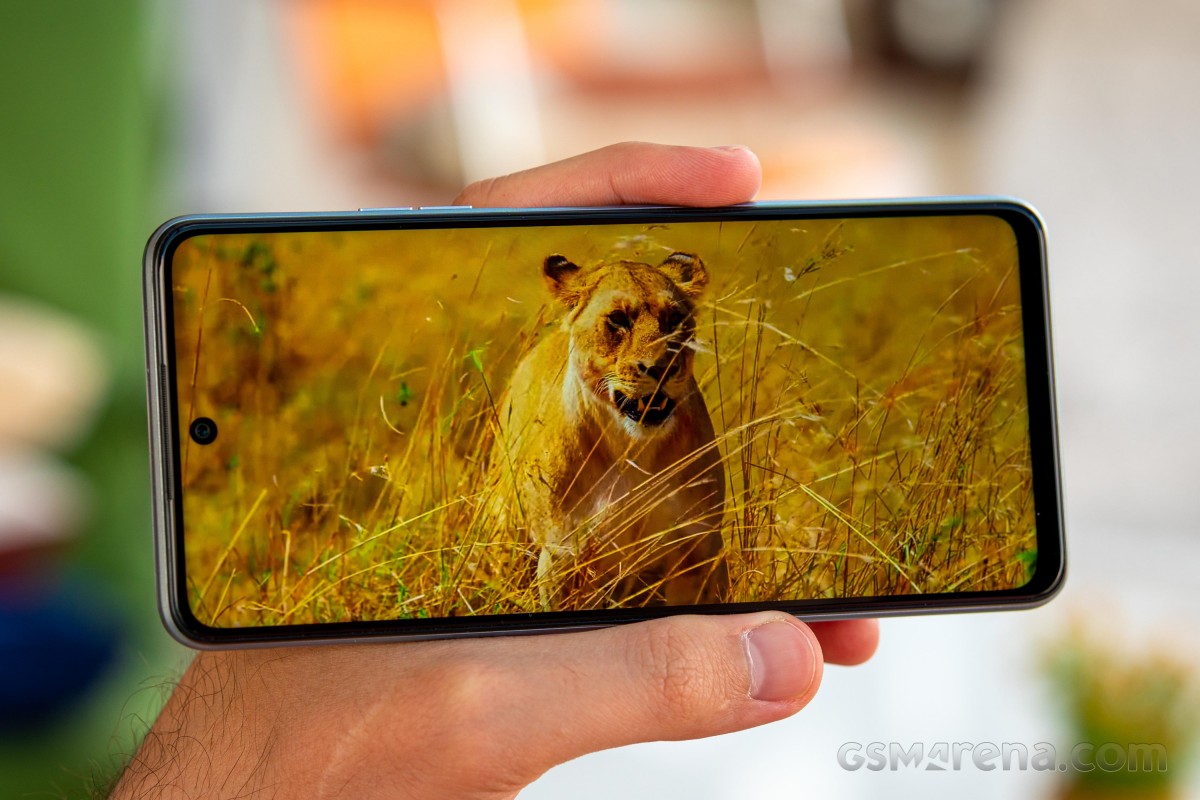 We measured two maximum brightnesses on the Camon, with somewhat inconsistent ways of achieving them - sometimes it would be the higher one, at other times - the lower one. The absolute highest we got was 538nits - an okay reading, if not particularly impressive. The other was 342nits - pretty low for an LCD.

Another peculiarity was with the black levels and, consequently, contrast. Black level was unaffected by the brightness 'mode' the phone happened to be in, and relatively high black illumination made for a rather poor contrast ratio in the cases when it would decide that 340nits is as high as it would go. The 1200:1 ratio when in '540nits high brightness mode' is better, if not quite up to scratch. Before you ask, that wasn't caused by light seeping in through the screen protector - we duly removed that for the testing.

In any case, the phone wasn't too problematic to read in bright sunlight where it would consistently get that high brightness boost - text is readable, and the camera viewfinder is usable.

The refresh rate settings on the Camon 17 Pro offer three modes - 90Hz, 60Hz and Auto. In 90Hz mode, you'd be getting the maximum refresh rate almost everywhere - the UI, browsers, video playback apps, social media apps - basically everything that's not the camera viewfinder and Google Maps. 'Auto' will maintain 90Hz for the system UI, but will quickly switch down to 60Hz for virtually all apps. 60Hz is always 60Hz. 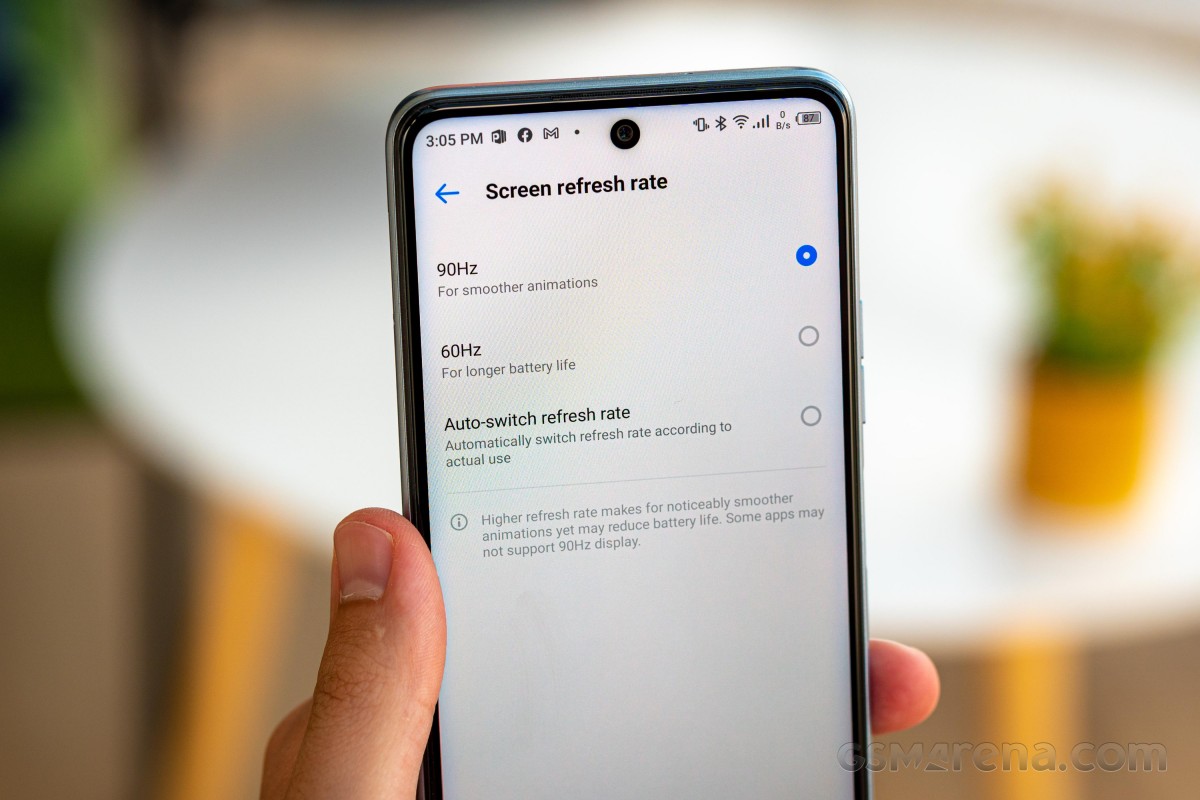 There are no color modes on the Camon 17 Pro, and its display doesn't cover a wide gamut like the DCI-P3, though it does cover sRGB. However, it's nowhere nearly as accurate in doing so, and it exhibits a strong blue shift.

DRM Info reports the Camon 17 Pro supports HDR10 and HLG. YouTube does say it's serving HDR streams of compatible videos, but we're not seeing it - there isn't that noticeable switch in color reproduction when playing back HDR clips. And with only a Widevine L3 certification for digital rights management, you won't be getting HDR from major streaming services like Netflix or Amazon Prime Video either.

There's a 5,000mAh battery inside the Tecno Camon 17 Pro, a fairly standard capacity for the size and market position, which should work well with a mid-range chip like the Helio G95. Indeed, we clocked some excellent battery life numbers on the Camon.

In our testing, it was good for 16:32h of Wi-Fi web browsing (at a constant 90Hz refresh rate) and almost 18h of offline video playback (at 60Hz). The 45h voice call result and the standby power draw are both great, too, with everything adding up to an Endurance rating of 140h. 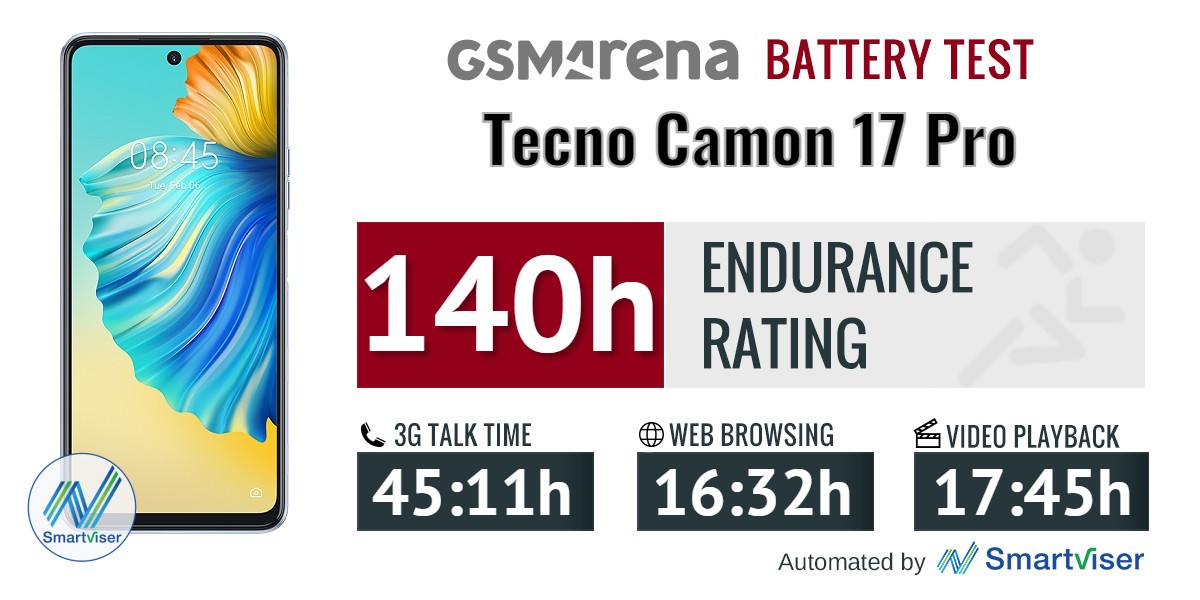 The Camon comes bundled with a reasonably powerful 33W adapter, rated at 5V/3A and 10V/3.3A. A full charge from flat requires 1:40h with the battery indicator showing 47% at the half-hour mark - not too bad, but not quite as quick as others around a similar price point. 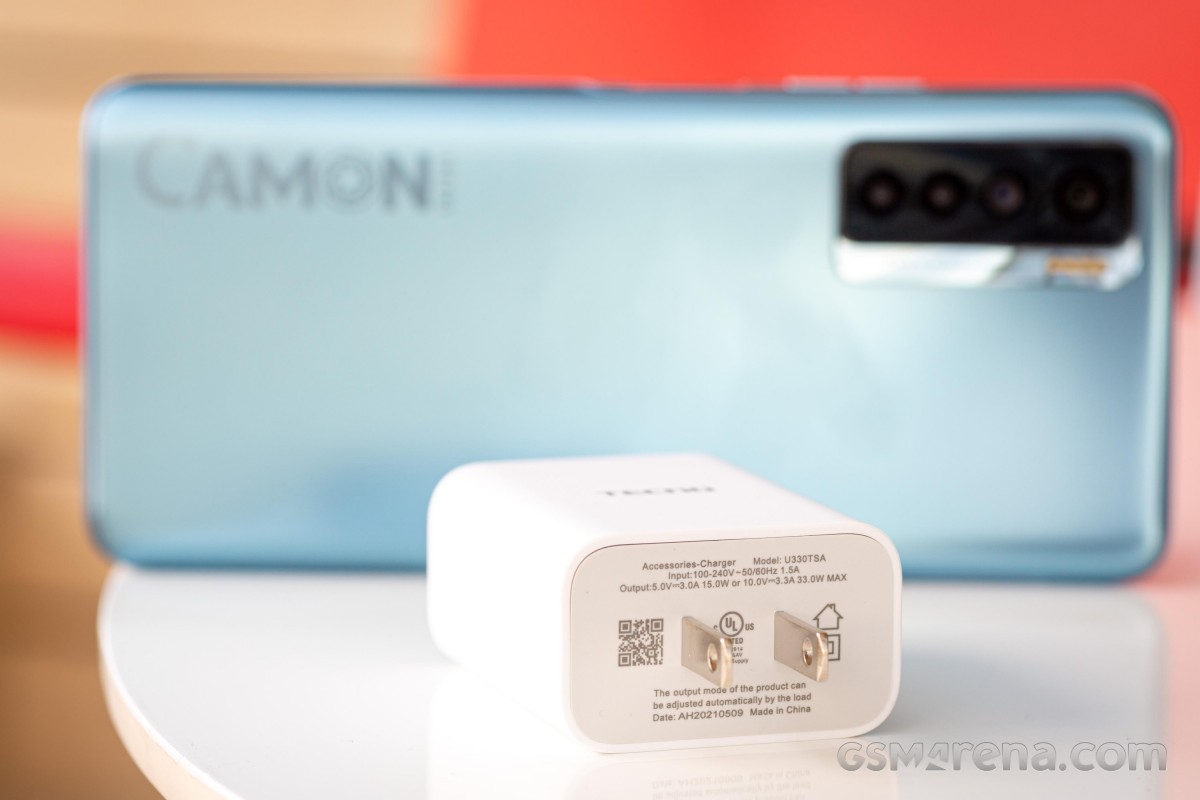 The Camon 17 Pro has a dual speaker setup, but it's not strictly stereo. Both the main speaker on the bottom and the earpiece up top output sound, and there's a notable directionality when the test track switches channels, but there's also sound coming out of the other speaker at the same time.

Main speaker on the bottom • The earpiece is a speaker too

These peculiarities aside, the Camon 17 Pro earned a 'Very Good' rating for loudness in our speaker test, a notable improvement over the Camon 16 Premier we last had for review. Quality is decent but not great - there's a pronounced emphasis on the midrange with little low-frequency presence.

Pls is there an issue with the fingerprint unlock of tecno camon 17 Pro, I read a review somewhere and about 5 people mentioned it and more people backed up that claim

Everyone has their own preference sha, for some, they are attracted to the phantom x cos it's curvy

I love tecno phones very much ,my first tecno phone was tecno camon , and now I am using phantom 9 , I will use only tecno phones in future also I decided