Wireless charging has been supported on select phones for over a decade now, but it has many detractors. It’s slow, it’s inefficient, it requires careful placement. But things have been improving lately.

The latest major upgrade comes in the form of magnets. Apple lead the way with its re-imagined MagSafe, while Realme is the first Android maker to adopt such a system. It calls it MagDart (“mag” for “magnet”, “dart” for its proprietary charging solution).

While MagDart isn’t the first ever, it is the fastest. We have a tiny aluminum block in our hands that is a 50W wireless charger and it pulls towards the Realme Flash – it snaps on in perfect alignment with barely any effort.

This takes care of one of the more annoying issues of wireless charging. With regular wireless chargers, bumping the phone off center can cause charging to stop, so we have to nervously double check the phone to see if it’s really charging. And if you bump it without noticing then you get no charge at all. 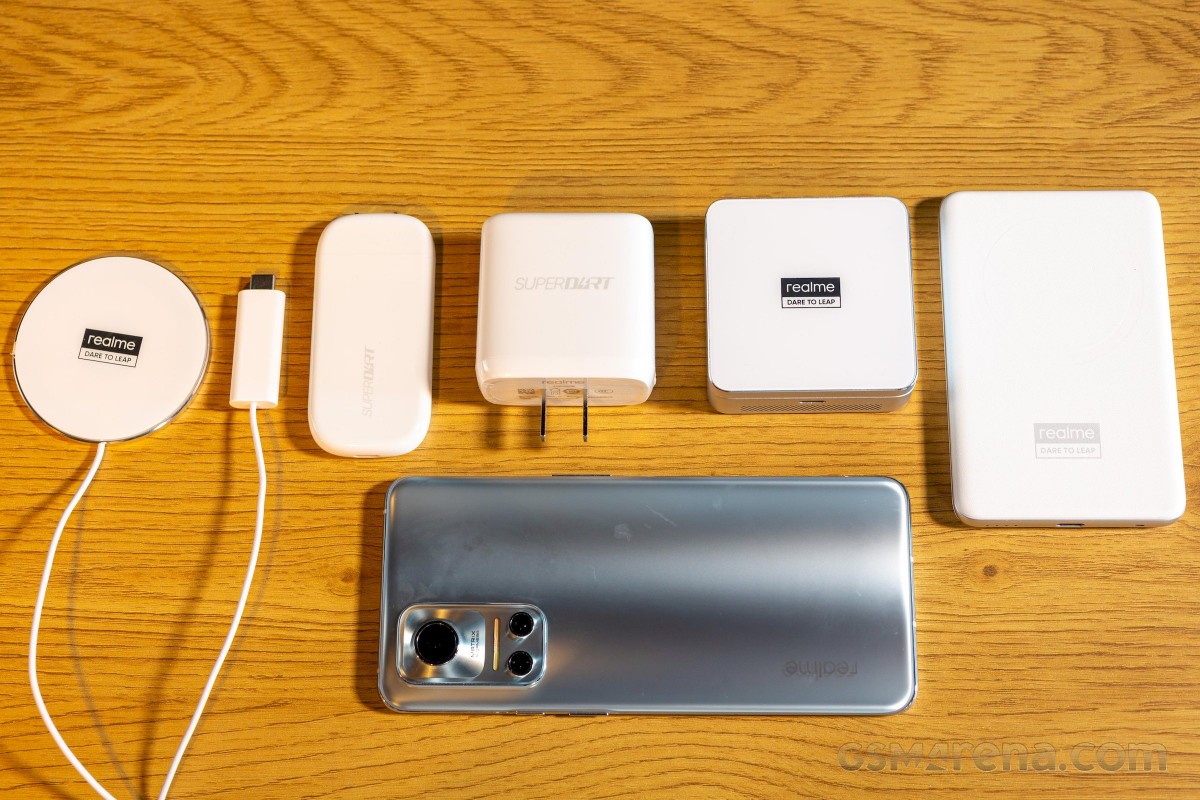 Wireless chargers have gotten pretty fast and 50W is not uncommon on flagships. But 50W is often overkill too, so Realme also created a thin and portable 15W charger. While it’s technically rated at the same power as Apple’s 15W MagSafe, in reality it charges noticeably faster. Keep in mind that these ratings are for peak power only, which is rarely achieved.

But we’ll get to the testing, let’s first meet the stars of the show. The Realme Flash is a prototype phone that we’ll use as a stand-in for future Realme’s with MagDart support. It has a 4,500mAh battery, which is as much as the Realme GT 5G has. The GT itself lacks native support for any wireless charging, but the company is working on a case that will add MagDart support to the phone. 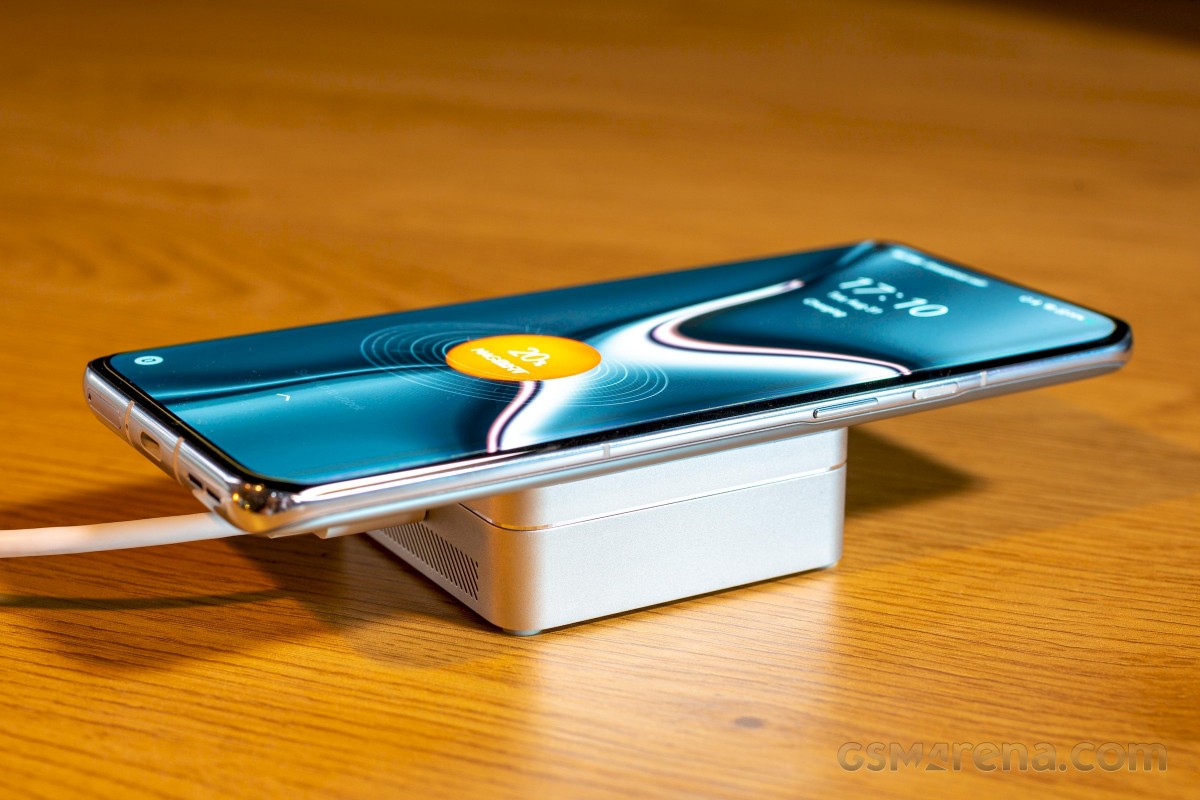 The first charger we will look at supports MagDart charging at up to 50W. It doesn’t have a catchy name, it’s just called the Realme 50W MagDart Wireless Charger. Well, it does do what it says on the tin, why complicate things.

Besides the charging coil, this unit also contains a cooling fan since 50W is too much for passive cooling to handle. Indeed, heat is the enemy of this charger as we’re about to see.

Officially, the charger can get the Flash to 20% in 5 minutes and complete the charge in 54 minutes. We couldn’t match these numbers and we suspect the room temperature is to blame. When we repeated the test in a warmer room, we noticed that the charging slowed down even more.

But with the AC on, the Flash got to 50% in just under half an hour and to 90% in about 56 minutes. The final 10% took a few more minutes, here’s a chart showing the charge state over time: 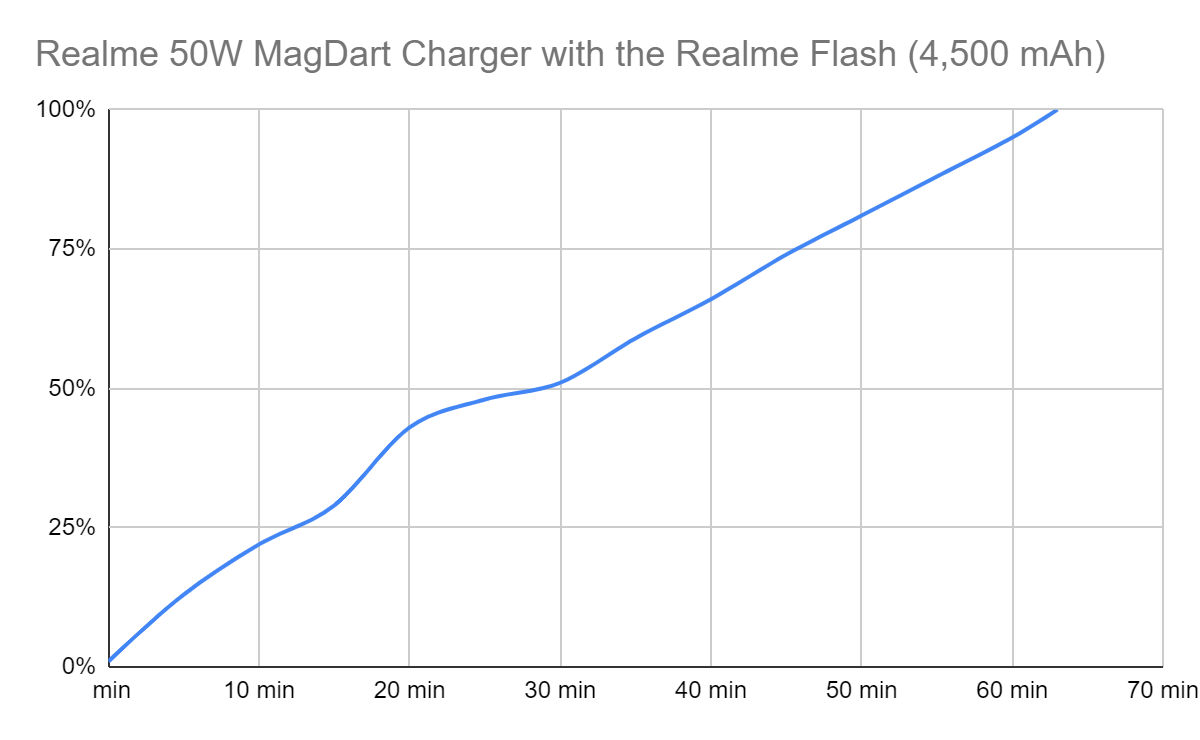 You can also have a look at this table that shows the charge progress in 5 minute intervals. There are several ways to read this table. Obviously, you can just look at the bottom row and say that a full charge takes about an hour. But what if you start at, say, 30%? Then it will take 45-50 minutes. Starting with a dead battery, you can go up to 50% or so in half an hour and so on.

The charger’s fan kicks in immediately when you put the phone on top. We have to note that this does a better job of cooling the charger itself than the phone. The back of the Flash is made out of glass and so is the top of the charger. This isn’t ideal for heat transfer, but is a necessary evil (metal carries heat more easily, but it would block the wireless charging).

In terms of noise, you can hear the fan when you are next to it, but it is not too loud. It is not something you’d want to put on your night stand, though 50W is overkill for overnight charging, anyway.

But you don’t have to charge at 50W. You can go into the settings and enable Quiet charging. This shuts off the fan and slows down the charging speed. You can have this on a schedule so that you get the full 50W during the day, but a quiet charging experience at night. The schedule is either automatic (when the phone thinks you’ve gone to bed, it turns on quiet mode) or with fixed start and end times. You can leave it always enabled too, if you wish.

This combines nicely with the optimized night charging feature, which charges the battery only to 80% during the night and tops it off in the morning before you wake up. However, this is done automatically based on the phone learning your behavior. We would have liked to see a manual schedule for this as well.

Moving on to the Realme 15W MagDart Charger, it is a small puck that measures only 3.9mm thick. This was achieved by moving the electronics in a sort of USB dongle on the other end of the cable, which has the added benefit of keeping heat-generating components away from each other.

The 3.9mm design is for more than just vanity. The small puck is easy to maneuver – you don’t have to put the phone on top of it, you can snap it on the back and keep using the phone. You can barely feel it’s there and if you nudge it out of alignment, the magnets will bring it back where it belongs. Trying that with a non-magnetic charger will be an exercise in frustration. 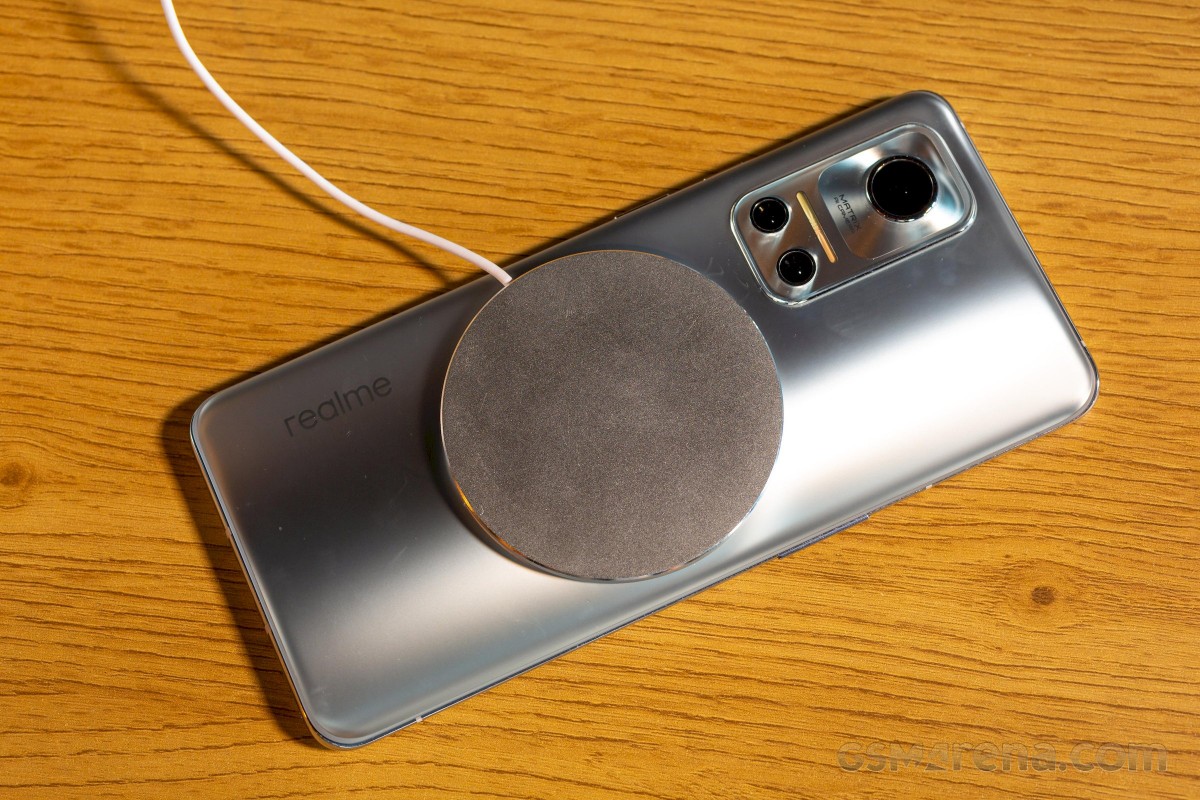 Obviously, this charger is not as fast as the 50W one, but it is not slow either. Especially since the 50W charger starts to slow down after 50% or so, giving the 15W one a chance to make up some lost ground.

30 minutes of charging a dead battery gets it to 36%, 50% takes a bit over 42 minutes and the full charging is done in about an hour and a half. Here’s a chart showing the battery state over time: 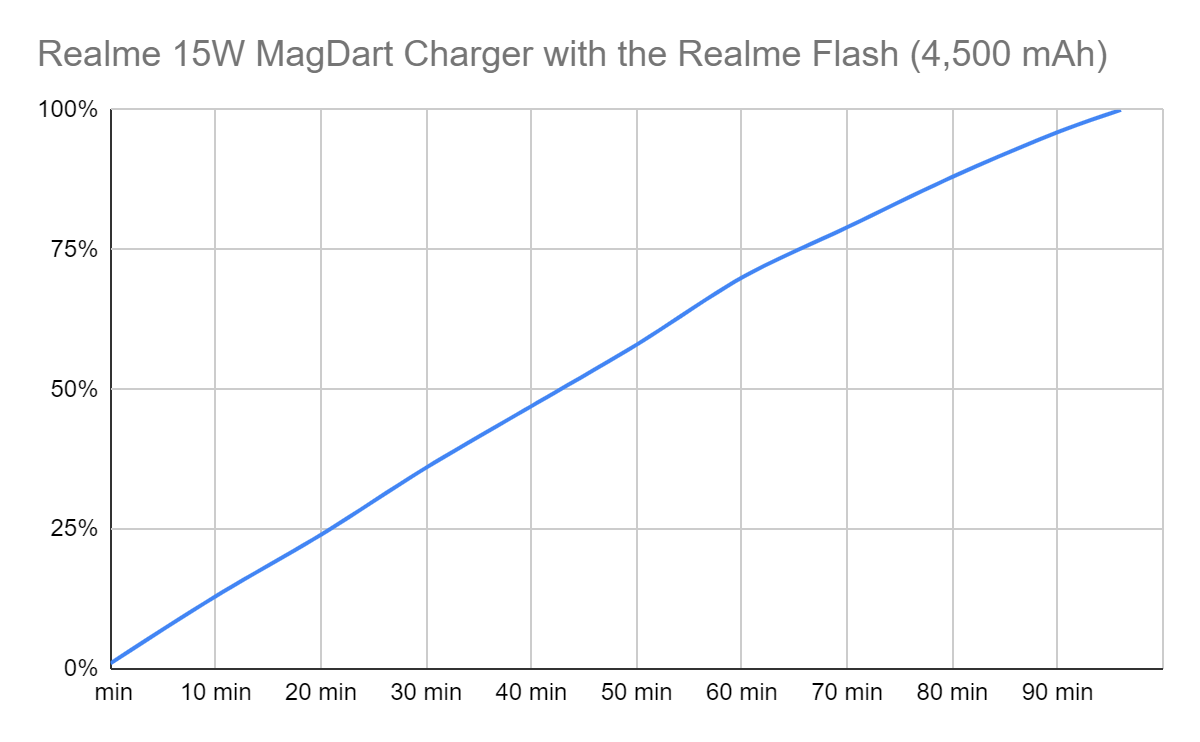 And here’s another table. This one is in 10 minute internals since the process takes longer, but you can still see how long it will take you to go from, say, 25% to 80%.

For comparison, an iPhone 12 Pro Max with a 3,678 mAh battery gets to 28% in half an hour using the Apple MagSafe adapter (which, again, is rated at the same 15W), a full charge takes an hour and a half, despite needing to fill a smaller battery.

Something important to note is that when we say a dead phone we mean nearly dead. If the battery is truly flat, the wireless charger won’t be able to wake up the phone. You need to have at least 1% in the tank.

We did one more test, this time using the 65W wired adapter, it’s the one we’ve been using to power the 50W MagDart adapter. This one is clearly much more efficient and got to 50% in under 13 minutes, the full charge was completed in 34 minutes. Here’s the chart: 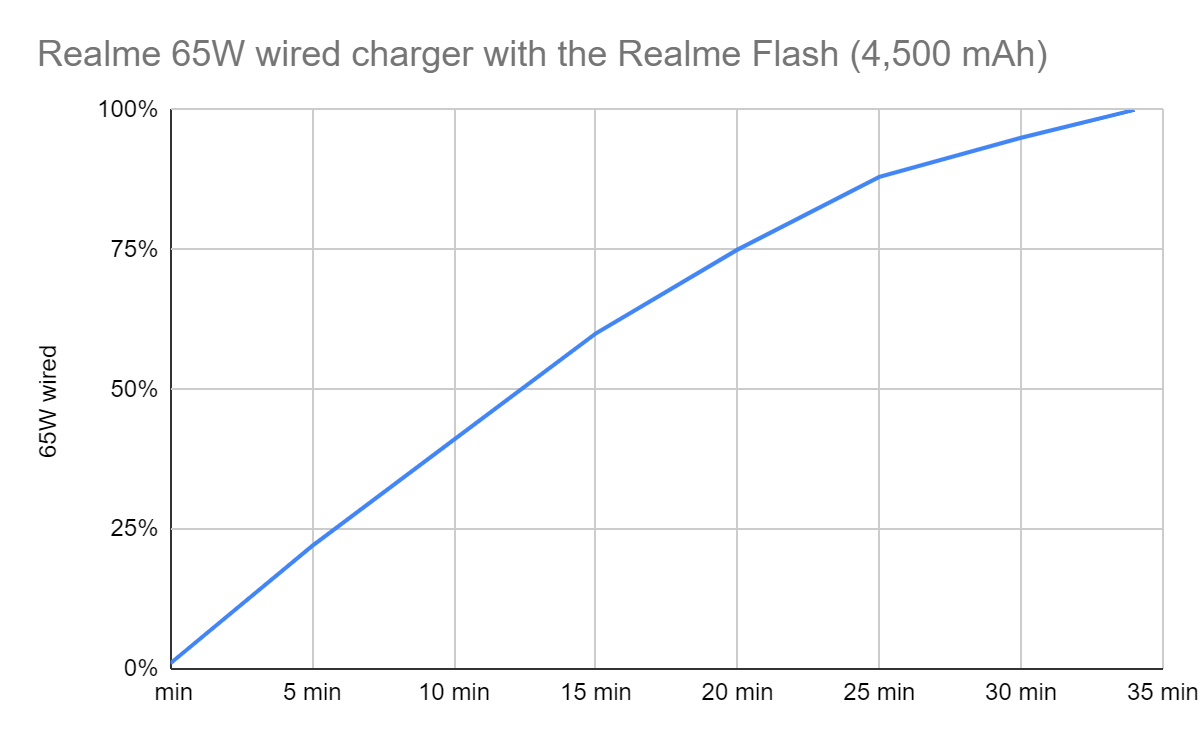 And the table in 5 minute intervals:

We would have tried Realme’s tiny 50W wired charger, but we only had a USB A-to-C cable on hand, the one used for the 65W charger. The 50W one has a USB-C port, which is what we used for the 15W MagDart charger, which we couldn’t use with the 65W one. If you’re getting confused by all this, the key takeaway is this – the sooner Realme moves to all USB-C, the better. Having to wonder “will this charger work with this cable and this MagDart adapter” could have been avoided.

There are more MagDart products in the family. One of them is the portable power bank, which is actually half of a stand-up wireless charger. This we will be testing some other time. But we wanted to mention the holding power of the magnets, since Realme has also designed a MagDart wallet.

Long story short, it doesn’t take too much force to separate the phone and the MagDart accessory. It doesn’t help that we tested without a case and glass-on-glass just doesn’t have much friction. Apple’s system has this issue too, a grippy silicone case makes the magnet accessories much harder to slide off and that’s how many use MagSafe. This is something to keep in mind if you are interested in the MagDart power bank or wallet.

But those are more curiosities than something we think will gain mainstream adoption (certainly not the mag wallet). What do we think of the magnetic chargers themselves?

To summarize, “yes, please”. Having to align the phone to the charging coil is a pain. Especially if you check your phone at night and plop it back on the charger in the dark. There’s a 50/50 chance that you will wake up with a battery in need of charging.

Not so with magnets – they handle alignment easily. And you can do it by feel without looking. As we mentioned earlier, you can charge with the 15W adapter while using the phone, not something we would try with a regular wireless charger.

The Quiet charging option on the 50W adapter means that you don’t have to buy one fast charger and one for overnight charging. That said, the 15W one is better for traveling since it’s super compact. The other one isn’t big by any means, just not something you can slip into your pocket. 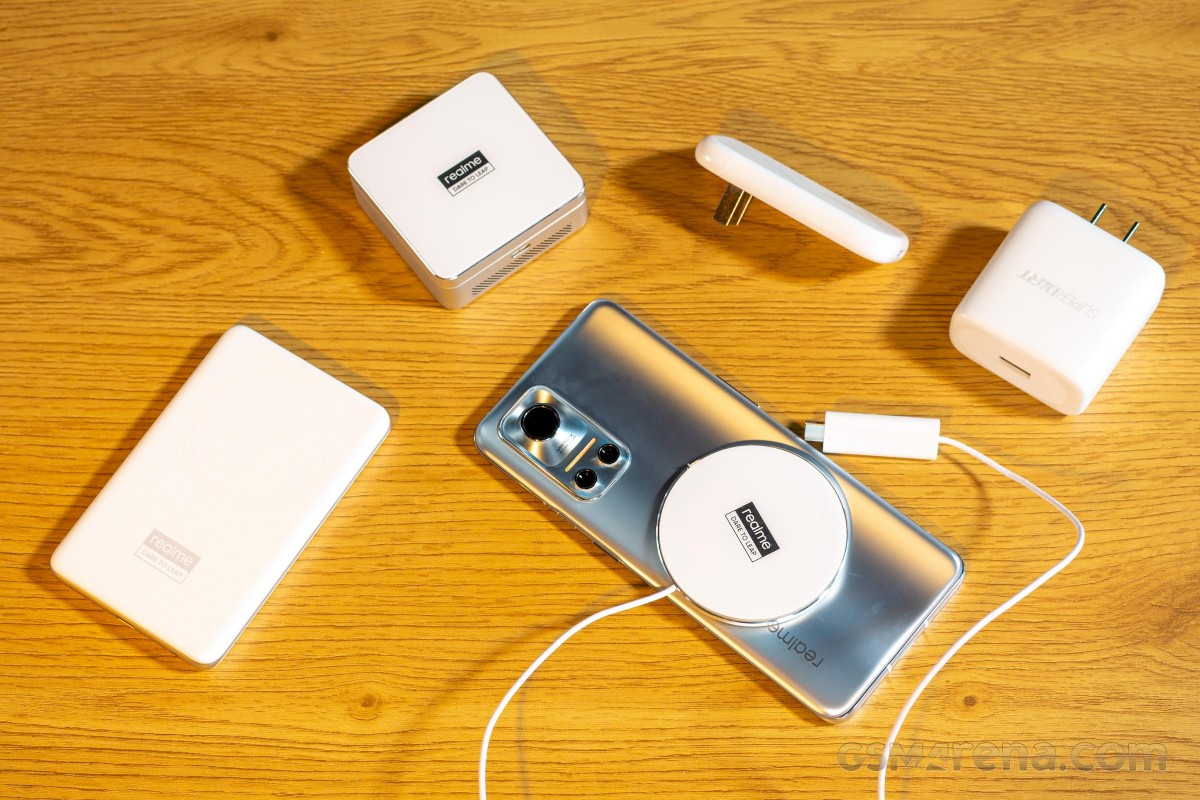 We’d love to see some rubber added to keep the adapters more stable, but other than this is a successful first outing for Realme’s magnetic wireless charging system. Sibling brand Oppo has its own version in the works, offering a different roster – a 20W puck, a 40W stand-up charger and a power bank.

We predict that other makers will adopt a magnetic system of some kind sooner or later (even the non-BBK brands). Ideally, an organization like the Wireless Power Consortium will step up and create a universal standard, so that we can avoid the mistakes of the past with proprietary power cables.

when will it launch??

Yes it is less effective, but using a 65W adapter and getting 50W of wireless charging is really impressive! Not so long ago efficiency was about 50%... I really like the tendency, especially with the expectation of portless phones in the near f...

It's not ceramic. It's just Victus glass. Ceramic shield is a marketing term. Xiaomi provides true ceramic back on the MI 11 ultra