The best phones of the decade - part 2

At the turn of the decade we look back at the most influential phones to come out in the past 10 years. You can find the first part here.

After parting ways with Motorola, Google tapped long-term partner HTC to develop the Pixel and Pixel XL (HTC also built the first ever Android phone). But this isn’t about the search giant finally slapping its name on a phone, which it avoided previously so as not to antagonize other Android makers. It’s not about the death of the Nexus line either.

No, this is about computational photography. Google developed a dedicated chip to handle the type of computations that its image processing algorithms needed. The ISPs of chipsets back then couldn’t handle it and “NPU” wasn’t a thing yet. 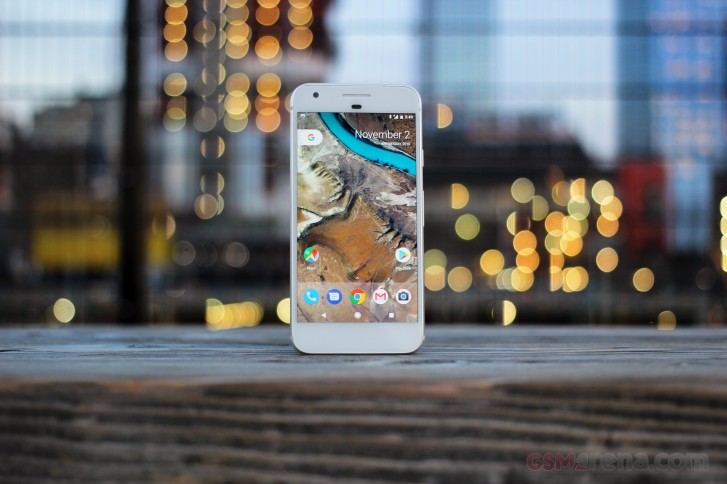 The original Xiaomi Mi Mix is part of a rare breed of tech showcase hardware devices that somehow managed to end up in user's hands. That, in itself, is sort of a trend in the mobile realm massively fueled by the Mi Mix. Beyond that, it was definitely the original visionary device when it comes to the all-display smartphone design. 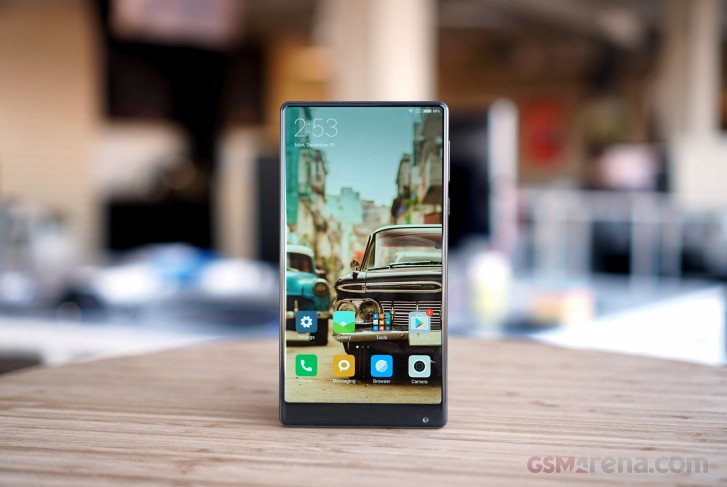 Bold in more ways than one and filled to the brim with experimental designs and tech like a piezoelectric ceramic driver earpiece, the Mi Mix is one masterpiece of a phone. It's design was a huge milestone, but the phone was also literally huge. Few still come close to the massive real estate offered by its 6.4-inch, 17:9 display.

It was September of 2017, ten years since the first iPhone broke onto the scene and reshaped the industry in its image and the whole world was looking at Apple in anticipation of its new-look iPhone. It may sound a bit over-dramatic now, but it wasn't then.

The iPhone X established two things that are still resonating through the tech world in late 2019 - notches and gesture-based UIs. Ever the bold no-looking-back company Apple ditched the home button and came up with the gesture system that is getting increasingly popular with every passing year. Face ID isn't everyone's favorite, but it is also being used to this day, two years later. 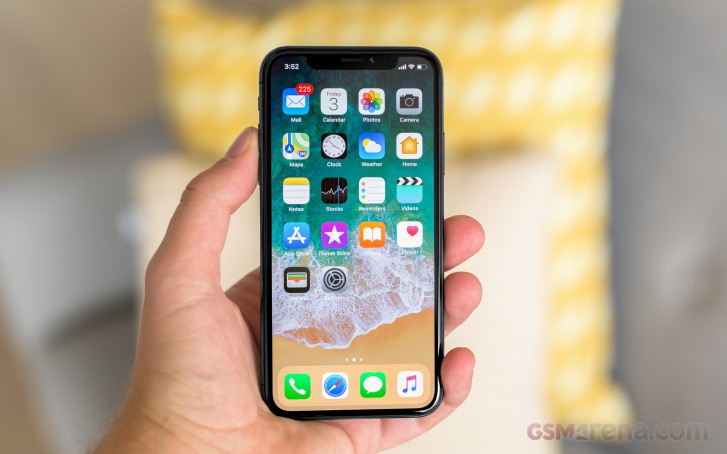 The iPhone X DNA is still very strongly-embedded into the iPhone 11, 11 Pro and 11 Pro Max and even at two years old, the iPhone X still packs quite a punch in late 2019. Its A11 chipset is very capable by today's standards, its OLED remains one of the best around and iOS 13 ensures it's still quite up to date and fast - not bad at all!

Bryce Bayer invented a color filter for digital cameras in and patented it in 1976, but you probably never heard his name until the Huawei P20 Pro was unveiled – people wanted to know what’s this “Quad Bayer” thing and how it’s different from the regular kind of Bayer. This 40MP sensor was the highest resolution we had seen since Nokia’s insane 41MP phones.

Huawei’s partnership with Leica stoked some early interest in dual-camera phones, but things really kicked into high gear with the P20 Pro – the first phone with a triple camera on its back. Besides, the 40MP Quad Bayer monster senor (1/1.7”), the phone also packed an 8MP telephoto camera with 3x magnification, which wasn’t very common back then (or today). A 20MP B&W sensor rounded off the trio. 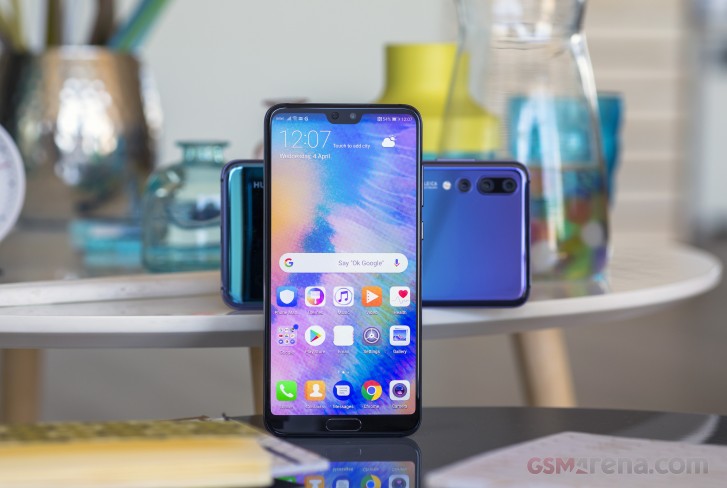 The company would push things further with RYYB sensors and periscope zoom in later models, but the P20 Pro was the first time Huawei got the upper hand in image quality against Apple, Samsung, Xiaomi and everybody else.

The war for bigger screens pushed companies to use unusual solutions such as the notch and the abominable punch-hole design. However, the vivo NEX S started the trend of elevating selfie shooters that is now available in the whole spectrum of smartphones - from entry-level Huawei devices to the flagship OnePlus 7T Pro. 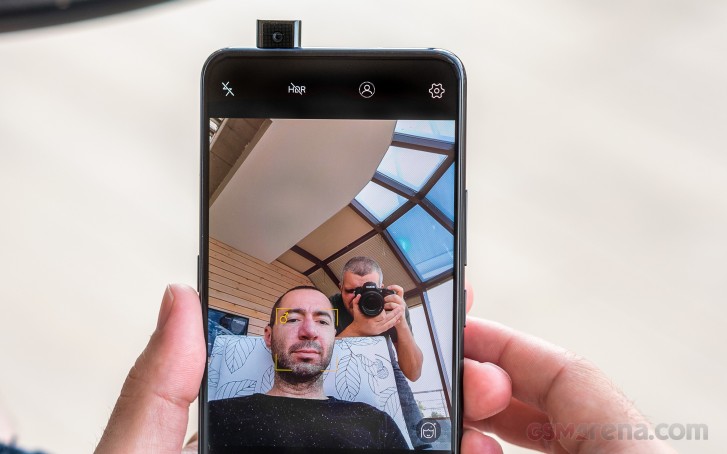 The elevation is done with a piece of a spiral screw that moves the shooter up and down, depending on the command sent from the phone.

Back in June 2018, we were promised over 50,000 movements up and down. Nowadays elevating cameras promise endurance far in excess of that number but even so, the NEX S has hardly ever experienced a failure of that particular component.

While vivo was first in the elevating game, Oppo clearly wanted to show it can do more. The Find X was formally introduced a week after the NEX S, but hit the market well into the second half of 2018. Instead of raising only the selfie camera, it had the entire top part of the phone move, revealing all the shooters, including the flash. 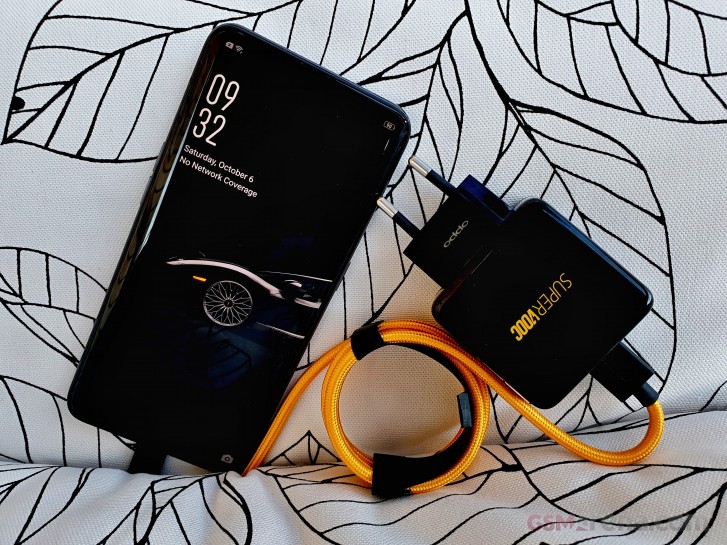 Another big innovation Oppo showcased with the Find X was the 50W SuperVOOC fast-charging. It was a pioneer solution and initially made its way only to the turbo-expensive Lamborghini Edition. The stupid-fast charging speeds matched the performance of an actual Lamborghini doing laps around the track of Imola, but it also paved the way for quick-charging solutions in cheaper devices.

More importantly, the introduction of Super VOOC lightened a spark inside the smartphone customers who now require their devices to have some sort of fast charging.

Nearing the end of the decade, smartphone manufacturers kept asking themselves how can they add more screen real estate without having a phone with a massive form factor. Apparently, only a look back to the YotaPhone from 2013 was everything the companies needed - first it was Meizu Pro 7 (and its bigger Plus sibling) which came with a small secondary display on the back to act as a viewfinder for selfies, then fellow Chinese companies went all-in with a screen from head to toe of the back panel. 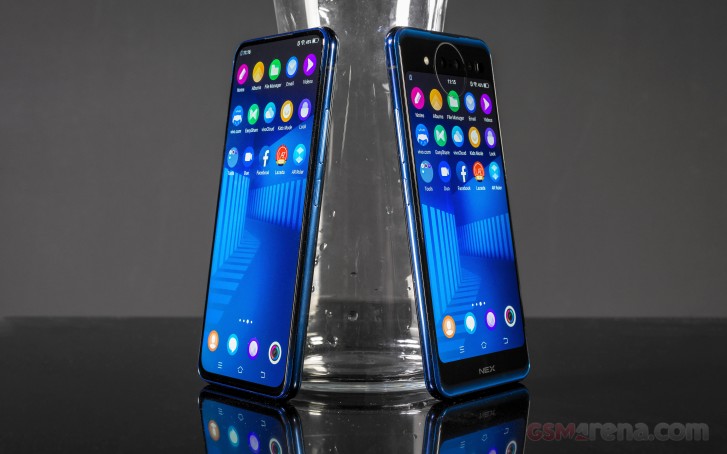 We bundled both the ZTE nubia X and the vivo NEX Dual Display because they implement the same technology in a different manner - have a huge front display without any visual obstructions and put a smaller one below the cameras on the back so you don't need a selfie camera. It is also an absolutely functional touch-screen panel, unlike the YotaPhone which had e-ink, while Meizu's solution was pretty rudimentary and unusable outside of the taking pictures situation.

The design cornerstone significance of the Samsung Galaxy Fold can't be ignored or denied. We feel like the Fold has been picked apart to its very core both figuratively and in some unfortunate cases, very literally at this point. There is plenty to love about it, and plenty to hate. 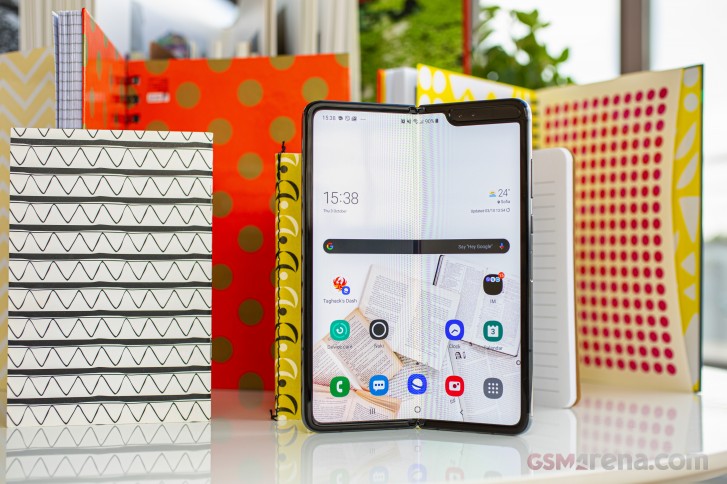 No matter which side of the barricade you personally find yourself on, though, we think we can all agree that the Fold is a paradigm-shifting device that already has and will continue to leave its mark on the smartphone industry. Let's just leave it at that, but if you do want the real nitty gritties of the Galaxy Fold, one of our editors did have the privilege of using it as a daily driver for over a month. You can read all about it in our long-term review.

The Samsung Galaxy S10 5G was one of the first proper 5G phones to be unveiled this year and the first to reach the market. When it came out in April, there were barely any 5G networks but only months later using 5G has become a very real possibility – EE in the UK covers 50 cities and towns, T-Mobile in the US went further and flipped the switch on nation-wide 5G. 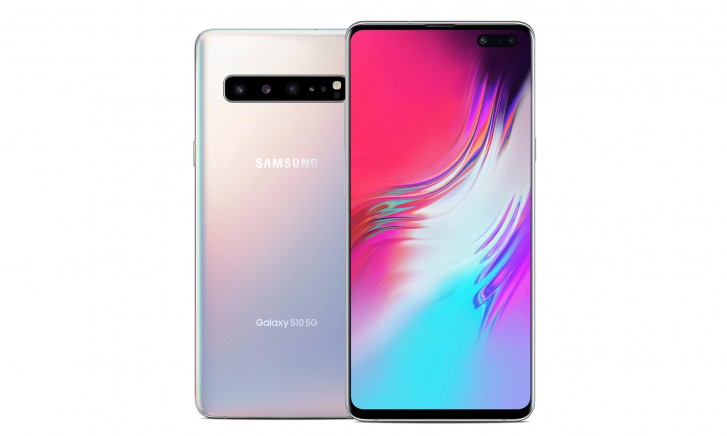 We should note that there are two flavors of 5G – mmWave and sub-6GHz. T-Mobile uses sub-6GHz, which has range rivaling 4G, but is faster, has lower latency and the capacity for many more users. Then there are the mmWave networks, which boast gigabit speeds, but can’t even cover a city block with the same number of base stations. The Galaxy S10 5G supports both network flavors, so you can experiment which one is best for you.

This next spot is reserved for rotating cameras and we really debating which phones should represent the category. One simple approach would be to simply pick the 2013 Oppo N1 and call it a day. While pretty cool design-wise, its motorized flip-camera never managed to quite make a meaningful impact on the industry. For one reason or another, we all just captured a few motorized panoramic shots and kind of forgot about the N1. 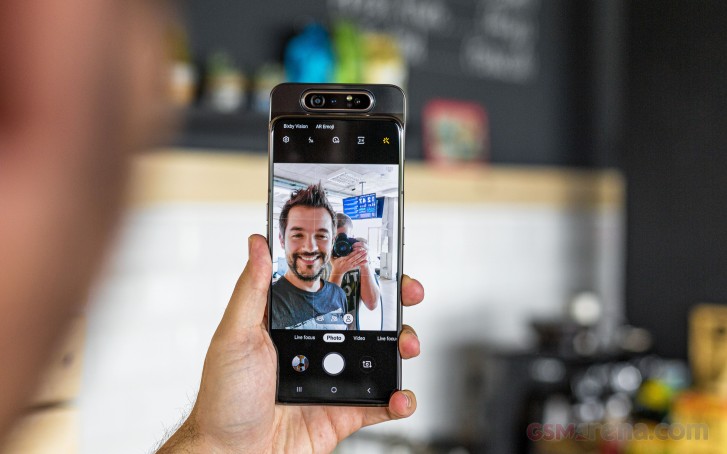 At least until 2019, that is, which saw both the Samsung Galaxy A80 and the Zenfone 6 re-visit the same concept. Just to be clear, though, neither of these devices managed to really set a trend yet.

Still, both were high-profile launches and important in that sense. Plus, there is also the interesting question of how manufacturers arrived at the idea of rotating camera modules yet again. Of course, this is a subjective point to make, but in the context of the still-popular strive towards truly all-screen designs, the rotating camera stands out as a logical step. It is no longer a quirky design choice developed in isolation. Perhaps, this time around, it might gather more traction with users.

High optical zoom was only ever seen on oddball phones Samsung Galaxy Camera and Panasoni Lumix Phone. Then 2x lenses arrived – 50mm or so – but that wasn’t really out of reach for a good digital zoom.

It all changed in the first half of 2019 – the Huawei P30 Pro came out in March, followed by the Oppo Reno 10x zoom in June, the first two examples of a new type of lens arrangement. Dubbed “periscope”, it featured a prism that reflected light 90°, which allowed engineers to build a camera with a long focal length and a tiny Z-height (the phones measure 8.4mm and 9.3mm thick, respectively). 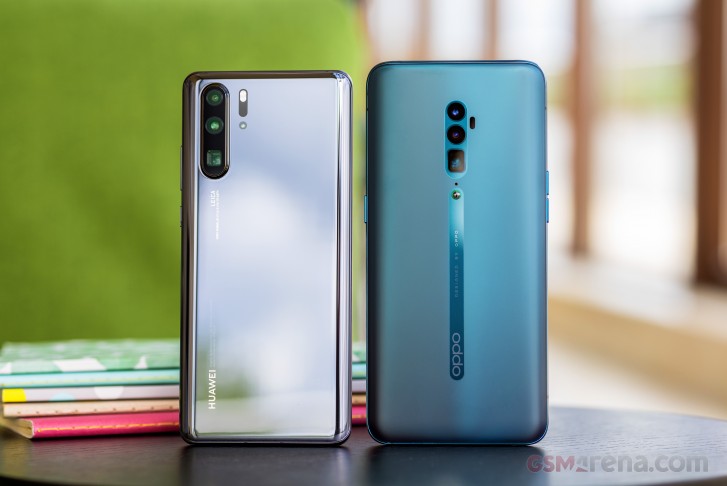 Speaking of focal length, the P30 Pro had a 125mm lens while the Reno went a bit further with 130mm. That’s the highest we’ve seen yet, it’s up to 2020 phones to beat them. Those are fixed mind you, the phone can’t smoothly zoom in like the Galaxy Camera and Lumix Phone could – that kind of tech is yet to be miniaturized.

But the path forward seems to be different, we already have phones with two zoom cameras along with high resolution sensors and image processing to bridge the gaps.

The best phones of the decade - part 1

GSMArena's Part 1 and Part 2 list, they are pretty poor. Not enough time and thought was placed in these articles. The Best Phones of the Decade? It should include releases before 2020, and basically covers the transition from Feature Phones/S...

Its still available as a brand new sealed box phone in India for some reason.