Meet the Honor 9X – no, not this one. Not the Pro either. Well, actually it's the Pro but with some changes. To be fair, things aren’t as confusing as they may seem at first – this is the global version of the Honor 9X Pro, the one announced back in July is slated for the Chinese market.

The only changes are the chipset – a Kirin 710F in the global model – and the name (the “Pro” moniker was dropped). Anyway, the phone is configured with 4GB of RAM and 64GB storage by default, some regions will also get a 6/128GB version. In both cases there’s a microSD slot for cards up to 512GB. 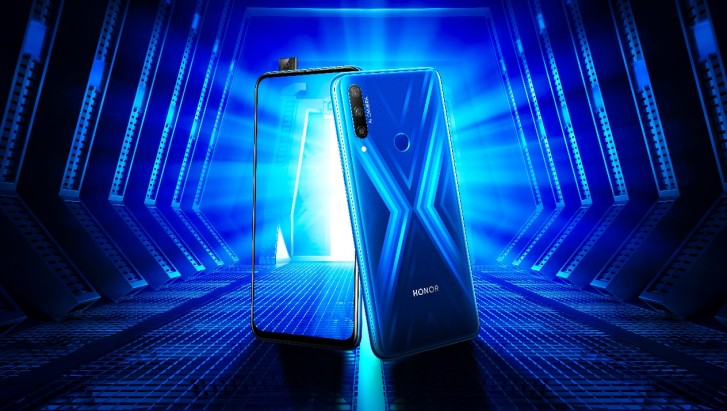 The second camera on the back has an ultra wide-angle lens (120°) and an 8MP sensor. It’s this camera that separates the Chinese versions of the 9X and 9X Pro. The third and final camera on the back is a 2MP depth sensor for bokeh shots. 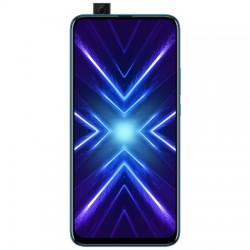 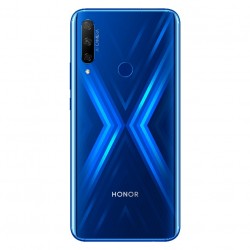 To keep the 6.59” IPS LCD uninterrupted, Honor mounted the 16MP selfie camera on a pop-up mechanism. This screen has 1080p+ resolution and covers a claimed 91% of the front surface area (the no-notch design helped eke out the last few percentage points).

The Honor 9X earns its name with the holographic X that appears on its back – it moves around as light reflects off the rhombic prisms created with sophisticated nanolitography. The light show is supplemented with the subtle color changes of the “halo gradient”.

The phone is available in Midnight Black and Sapphire Blue. While we're looking at the back, notice the fingerprint reader here.

Honor is pretty proud that it kept the 3.5mm headphone jack, saying it offers a versatile listening experience. This leaves the USB-C port open so you can listen and charge the phone at the same time – something you may have to do as the 4,000mAh battery can only be charged at 10W.

At launch, the Honor 9X will run EMUI 9.1, which is based on Android 9 Pie. Note that the phone comes with full support for the Google Play Services. It also features GPU Turbo 3.0, which promises smooth gameplay in games like PUBG, Vainglory, Arena of Valor, NBA 2K18 and so on.

We’re waiting on word from Honor on when the 9X will become available and where.

The Honor V30 Pro with 5G connectivity is coming in November

Honor Play 3e is the latest affordable smartphone, costs about $100

I got the LTE band list from GsmArena. It could be wrong but Honor does has an official US sales site where all of the phones there have only Chinese radios. https://www.hihonor.com/us/ We'll see when it's updated for the 9x International.

The problem is that the noise and artifacts in the pictures (12mpx setting included) are worst than 8X, despite the newer and more advanced sensor.