Xiaomi co-founder and president Lin Bin has been taunting other brands (and teasing consumers) with how awesome the Xiaomi Mi Mix 3 is going to be. First the Oppo Find X-like pop-up camera now 5G support.

His latest photo shows the phone with its status bar reading “5G”. The phone is in front of what appears to be a 5G testing station, “NR5G” refers to to the 5G New Radio standard, which encompass the sub-6GHz and mmWave technologies. 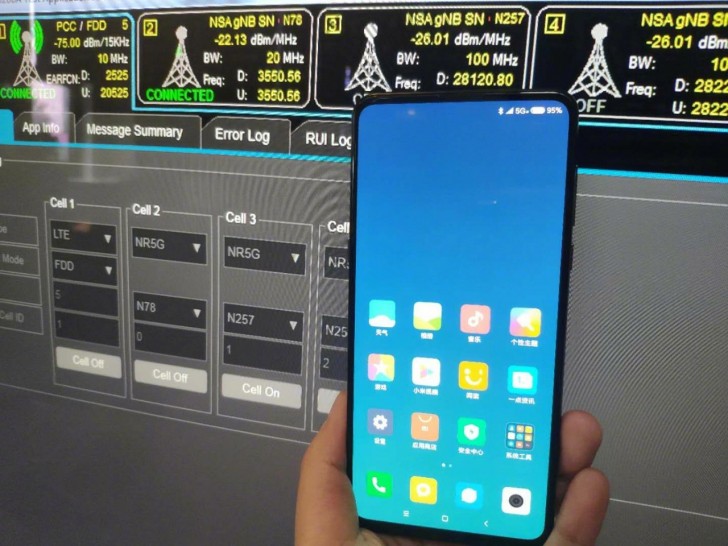 The N257 band specifically is in the 28GHz band, so it’s mmWave tech (the faster, but shorter range of the two technologies). Qualcomm already has two modems that support the new 5G standards and promise speeds up to 2Gbps and 5Gbps. Presumably one of those is inside the Mi Mix 3 (though there are other vendors offering 5G-capable modems).

Bin suggested that the Xiaomi Mi Mix 3 can launch in late October, so the notch-free, 5G-powered future could be less than two months away.

However, the same photo was tweeted by Xiaomi's Director of Product Management, saying that the rollout will be next year (is that for the phoen or for the networks?).

We've successfully tested 5G data connections on Xiaomi phones, and we can't wait for the official rollout of 5G next year! 🎉🎉

5G download speeds are more than 10X faster than 4G speeds. What's everyone looking forward to the most? ⚡⚡️⚡️ https://t.co/vLAH3wosni

the phone not even cost us 1 month salary... go for next if happen

5000mah all i need is flagship handphone with ultra long battery life. dont we all so shame by using the expensive phone like drug sucker , keep looking for charger

I'd never buy phone with "hidden" cameras. That's just asking for trouble. Sooner or later that motor dies or it gets stuck because it's clogged by dust/dirt and then good luck with your selfies and photos...