We've recently looked at the vivo V23 Pro, and now it's time to put the vanilla vivo V23 5G through our rigorous review process too. Like its sibling, the vanilla V23 is a very interesting mid-ranger with a slick design and a few nifty and particular bits and tricks to make it stand out.

Specs-wise, the regular V23 is just a relatively minor step down from its bigger brother. It is smaller in most dimensions, though slightly thicker and heavier than its sibling, mostly due to its thick flat middle frame made of metal instead of plastic. All the while, it has a smaller display, which, however, offers similar specs on paper - a 90HZ, HDR10+ AMOLED panel. The regular V23 also steps down from the MediaTek Dimensity 1200 5G chipset to one of the company's newer Dimensity 920 5G designs. This chip that hasn't passed through our review process before, and we are pretty keen on exploring.

Finishing off the list of downgrades, we have a 64MP main camera on the V23 instead of the 108MP one on the V23 Pro. That and an ever so slightly smaller 4,200 mAh battery.

Thankfully, the trade-off comes with a notable MSRP reduction of EUR 100, putting the vanilla V23 in a much more competitive sub-EUR 400 spot and potentially addressing one of the major drawbacks of its sibling - the high asking price for what's otherwise an unquestionably unique phone.

And that's kind of the odd thing about the new vivo V23 duo - the two devices seem to have some major differences, particularly in design, while also somehow managing to be quite similar to one another and pretty distinct from most other phones out there. Vivo deserves plenty of praise for that achievement alone.

Both the V23 Pro and V23 share a similar lookinng back, down to the camera island shape and the UV-reactive panel. However, their profiles are quite differennt. Whereas the V23 Pro has a curved AMOLED display with thinner and curvier sides, the vanilla V23's frame is a much wider, nearly flat metal band, and it's combined with a flat display. If the V23 Pro takes after a Galaxy phone, then the V23 vanilla is more like a recent iPhone. 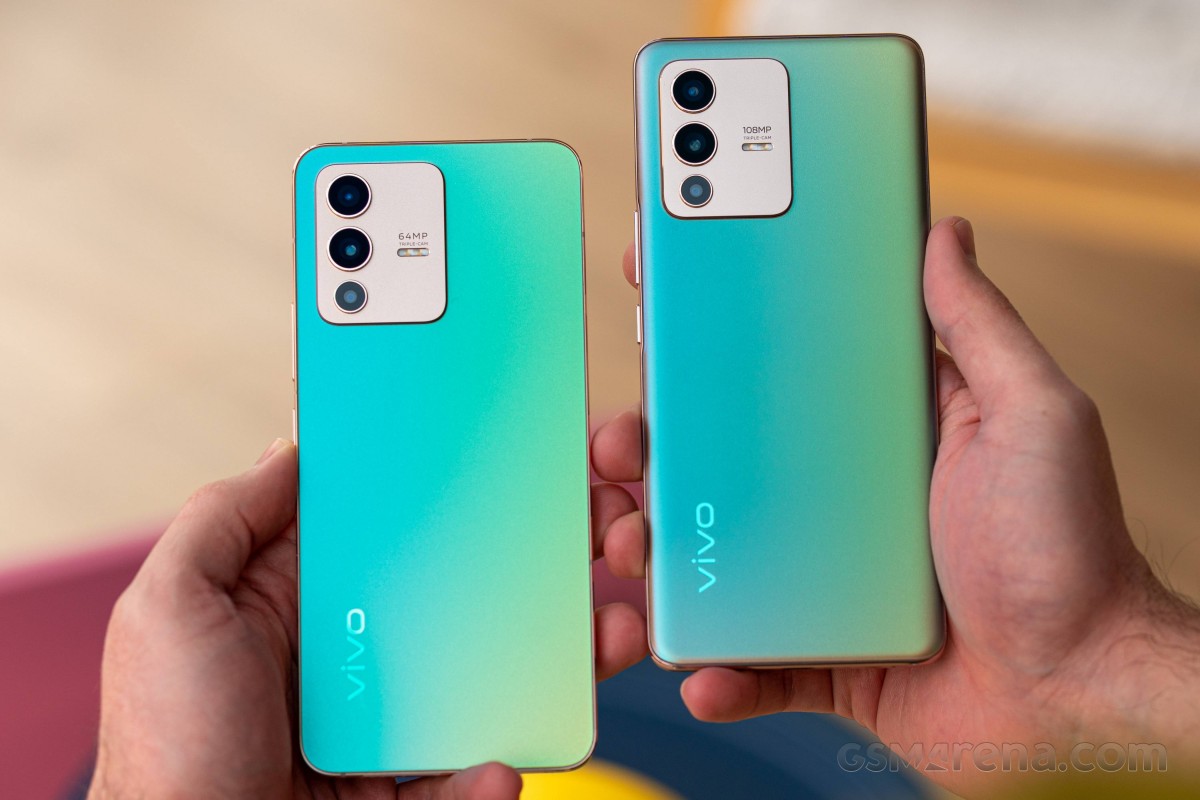 Aswe already mentioned, the two phones share the signature Sunshine Gold color variant that has a UV-reactive dye, which changes color when exposed to sunlight or other UV light.

Put the two together, and you get nothing short of a unique and distinct 2022 mid-ranger. In fact, vivo somehow managed to craft two "flavors" of essentially the same formula without taking away from either phone in any obvious way. Impressive stuff!

Having explored the particulars of the V23 Pro, it's now time to do the same for the vanilla V23, just to see what really makes it tick and whether it works as well in practice as it looks on paper.

Rather expectedly, the two vivo V23 models also have a lot in common in terms of packaging. The V23 ships in a thick and solid two-piece cardboard box. One in an eye-catching dark blue color scheme and a sparkling coating on top. 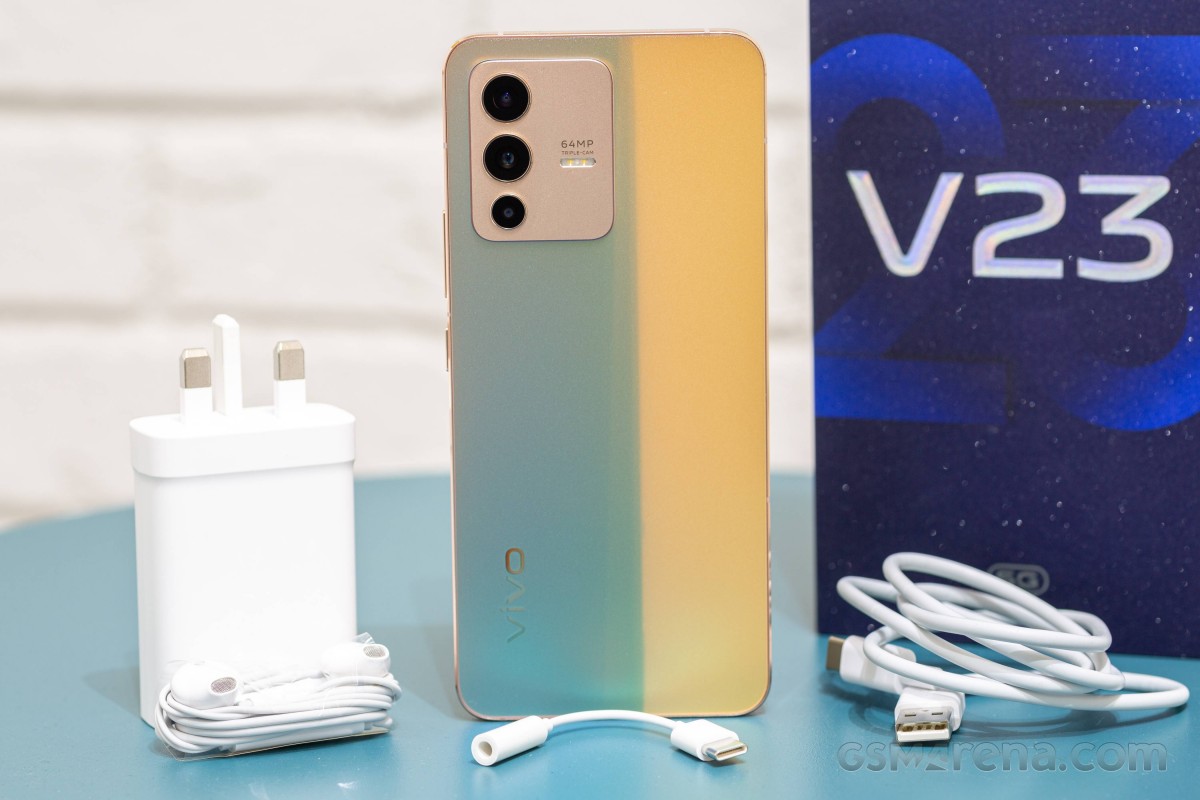 Inside, you get one of vivo's 44W FlashCharge adapters and a USB Type-A to Type-C cable. In addition - a plastic, transparent TPU case and a pair of nice, white, corded vivo earbuds with a 3.5mm jack(!). The V23, just like its bigger sibling, lacks a 3.5mm jack, so vivo has also thrown in a Type-C to 3.5mm audio dongle in the box.

I have purchased a day before yesterday and today i am gong to market to sell this out. the looks of this phone is excellent but its camera/hardware is not up to the mark. its my genuine opinion regarding ViVO V23 5G handset.

Hie team, Hope you all are doing fine.This is regarding my new Vivo V23 phone.I had purchase the same phone in the month of Feb end.I was already user of Vivo phone so I was happy to get new Vivo 5g phone.But soon I realised that I have chosen wron...