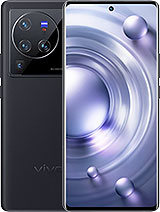 notafanboy, 09 Mar 2022I agree. 8MP periscope is bad. They are going backwards (X5... moreThe 8MP periscope is fine. When the newer chipsets and V1+ processor is concerned, it should actually be better than my P30 Pro, which is already totally fine.

However, I agree with you. The 8MP should have been out phased for 12MP periscopes at least a year ago.

Also, the "okay" performance for the 8MP periscope only really applies for default and VERY SLIGHTLY zoomed images. I rarely zoom past 6-7x, and if I have to, the results are bull. I couldn't care less for Huawei's "Hybrid Zoom" because any results past 10x are totally unusable in anything. (The only exception is moon shots, but we know why that's the case...)

Vivo should really have taken a leaf from Samsung and Huawei by using higher resolution cameras for their periscopes. 12MP starts becoming really nice, after trying the P40 Pro in-store. Finally, the 10x and even 13x photos start becoming usable.

Also, on the subject of periscopes. The high res low magnification periscopes like the Mi 11 Ultra and S20 Ultra are not very good for zooming in after trying the latter in-store. I struggled to get any good results past 10x. However, their low light capability is very promising.

does it have stereo speakers or not? there is no info about that, if not its big disapointment! bcs all flagships from Vivo last years they had this feature..

R2D2, 25 Apr 2022My old realme phone which has a 2x telephoto camera takes b... moreDude, x70 sucked. Even the pro. I went to the store where it is officially sold and embarrassed the customer service when I tested the cameras there.

captain fokou, 23 Apr 2022Then you have way to high standards and should get a used s... moreMy old realme phone which has a 2x telephoto camera takes better pics at 10x than vivo x70 pro at 10x even though vivo comes with dedicated 5x periscope. BTW why are you getting triggered about my complaint. I bought the phone because it's cheap and has a periscope lens which I wanted. If I wanted to spend so much money, I would have got s22 ultra just for the zoom

captain fokou, 23 Apr 2022Then you have way to high standards and should get a used s... moreNyeh, my Pixel 6 Pro takes good shots at 10x.

notafanboy, 22 Apr 2022Even at 10x it looks bad.Then you have way to high standards and should get a used s20 ultra instead of that.

If this one has the same display and camera as the pro+ I'm so buying it regardless of its price .

Damn this is a great phone on papers at least.

Ali2020, 10 Mar 2022Yes and it's not even available in a lot of markets an... moreFrr instead of releasing new series every 6 months, they should expand their market and stock

Ali2020, 10 Mar 2022Yes and it's not even available in a lot of markets an... moreYeah.. Their sub brand Iqoo has even smaller market availability. The phone looks awesome though.

Tigolebitties, 08 Mar 2022Chill, Vivo. You just released the X70 series 6 months ago...Yes and it's not even available in a lot of markets and where it's available is always out of stock or overpriced