Weekly poll results: fingerprint readers below the screen is what you want in 2018

Sometimes it’s the simple things in life – why complicate things with 3D facial scanning when the fingerprint reader does an excellent job already. Especially if that reader is in a convenient place, say under the screen.

That’s the feature that excites most of our readers, it got 38% of the vote in last week’s poll. That will soon be a reality, vivo promises to put out a phone in early 2018. We put our finger on it and found that while it’s not the fastest reader around it was average – impressive enough for first-generation tech.

Surprisingly, not many people are looking forward to triple cameras in 2018. Or perhaps it’s not that surprising, considering that the Pixel 2 phones take amazing photos with just one camera. Same for the proliferation of OLED screens – most people find it hard to get excited about.

It is worth pointing out that the Synaptics-supplied tech used by vivo works exclusively with OLED displays, but perhaps that will change in the future.

Only 4% of the vote went to the Other option. We went through the comments and found that battery related wishes are the most common: more capacity, replaceable batteries, better charging methods. Others were just asking for what we took for granted, things like FM radio and a 3.5mm jack.

Anyway, vivo may be the first with a fingerprint reader below the screen but it won’t be the only one. If nothing else, we suspect that the other BBK brands will bring out their own models 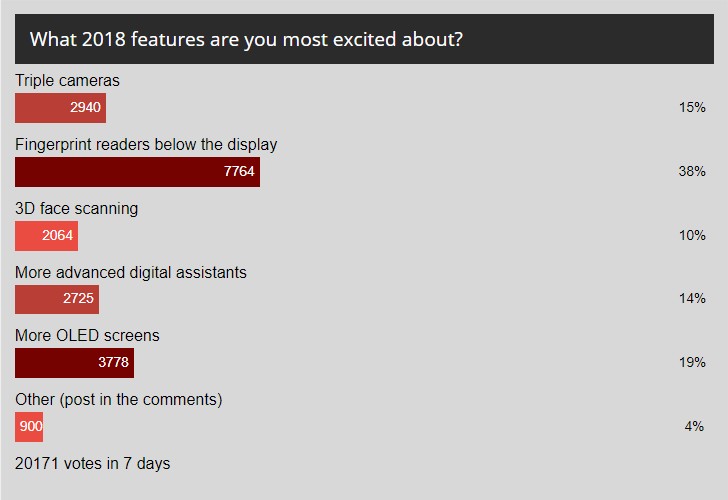 Weekly poll results: Samsung Note8 is the best smartphone of 2017

i would vote for triple camera

I still prefer the Finger Print scanner that is located at the back for more grip when unlocking your precious device.