The Realme 2 Pro scored high in last week’s poll. And how could it not when it undercuts even traditional “value for money” champs like Xioami’s Redmi Note series?

There were some concerns in the comments. Understandably, not everyone is a fan of the microUSB port. And people do wish for a larger battery (though, 3,500mAh is plenty, just ask LG or Apple).

Another issue that came up frequently is that the Snapdragon 660 chipset is underclocked. The big Kryo 260 Gold cores certainly are, they run at 2.0GHz instead of the usual 2.2GHz. That still gives them a 0.2GHz lead on the Snapdragon 636 cores.

And do keep in mind that these are the maximum clocks, which the CPU can rarely sustain, anyway. Looking at the benchmarks, the Realme 2 Pro loses the single-core race to the Xiaomi Mi A2 (S660), but actually beats it in the multi-core test. Also, the GPU clocks are untouched and that Adreno 512 is a great performer in the mid-range.

Speaking of the Mi A2, an Android One phone, there was a division over Color OS. Some say it works quite well, others wish for pure Android. Unfortunately, there’s not much to do here - of the BKK group only OnePlus sells (mostly) unmodded Android and they don’t bother with the mid-range (1+X=what?).

Next Tuesday the Realme 2 Pro, the Realme 2 and (perhaps) the Realme C1 will launch in Indonesia – only the brand’s second market. But with such positive attention, the Pro model is sure to make for a successful launch. 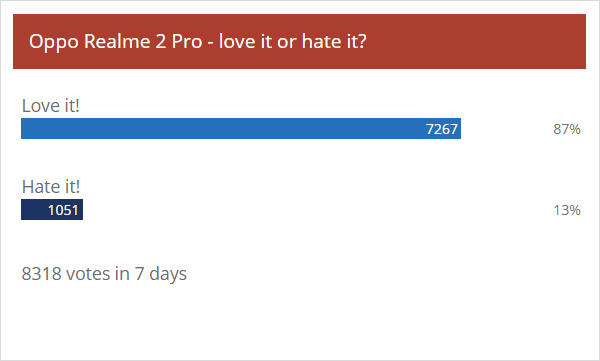 Weekly poll results: Galaxy A7 (2018) and its triple camera get the thumbs up

Hmm, is it common. What does it mean in Spanish?